The FX spinoff is based on the late crime writer’s City Primeval: High Noon in Detroit. Set in Motor City, the gritty novel features local cop Ray Cruz, but in the series (premiering Summer 2023), Givens is the protagonist and Cruz (Paul Calderon) is a retired homicide detective.

“Tim started banging the drum to put Raylan in this world,” reports executive producer Michael Dinner, “and that’s how this mashup started.”

In Justified: City Primeval, the timeline has moved ahead 10 years and Raylan is now part-time dad to teen Willa (played by Olyphant’s real-life daughter Vivian). In Detroit, he runs into Clement Mansell (Boyd Holbrook), “one of Elmore’s great antagonists,” Dinner says. 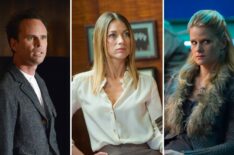 “It’s three characters on this collision course,” Dinner sums up, “and you wonder who, if any of them, comes out alive.”