The Answer Is…: Reflections on My Life

Jeopardy!‘s latest super-champ from New Jersey, Cris Pannullo, just collected his 18th win on the show on November 30, but we also got some insight into the newfound legend’s taste in cinema. Before pushing his total cash winnings on the game show to $637,923, host Ken Jennings asked Pannullo what films he likes.

Due to the recent trilogy’s previous release schedule (as well as its nostalgic Christmas special), Star Wars has become synonymous with the holiday season. And what more perfect movie to add to The Skywalker Saga rotation than Spaceballs, which is currently available to stream on FuboTV with a subscription, as well as on Vudu, Prime Video, and Apple TV if you’re looking to rent or buy digitally.

But this little anecdote got us wondering: what are some other Jeopardy! big-name’s favorite movies? Check out the below for some of the best champs and hosts’ favorite films. 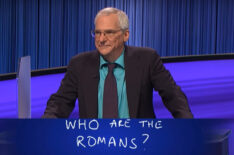 The late, great Canadian-born quiz show host revealed in his memoir, The Answer Is…: Reflections on My Life, that his favorite film has always been How Green Was My Valley, most likely the 1941 adaptation. The story chronicles the life of a mining family called the Morgans in the South Wales coalfields, the loss of that way of life, and its effects on them.”Whatever our souls are made of, yours and mine are the same,” Trebek wrote was his favorite line. “That’s the way I look at [my relationship with Jeanie]. We are one soul in two bodies.”

Can you stream it? How Green Was My Valley is available for rental on Prime Video and rental on many other services.

In collaboration with Criterion, Jennings broke down his top 10 favorite movies of all time. And among picks like The Life and Death of Colonel Blimp, A Hard Day’s Night, and The Night of the Hunter reigned supreme. “If you’re only going to make one movie in your lifetime like actor Charles Laughton did with this creepy Southern Gothic fable in 1955, why not make the best movie ever? And it’s also a Christmas movie!” The plot focuses on a corrupt faux minister serial killer who charms an unsuspecting widow to get his hands on $10,000 in stolen bank loot hidden by her executed husband.

Can you stream it? Yes, The Night of the Hunter is available currently available to stream on Tubi and rental on many other services.

Back in 2021, Schneider took to Twitter to introduce a few of her favorite films in a retweet. “Master and Commander, for sure,” she tweeted, “The Ice Storm, I Heart Huckabees, Jesus Christ Superstar, Mad Max: Fury Road, The Hunger Games, The Great Muppet Caper.” When someone said they were surprised by the inclusion of The Hunger Games, she replied, “It’s a perfect movie. Elizabeth Banks is amazing in it.”

Can you stream it? Yes, The Hunger Games is available to stream on Prime Video and Apple TV+, plus is available for rental on many other services.

In a Facebook post from 2018, the fan-favorite celebrity host said: “One of my favorite movies as a tween was Sixteen Candles.” But that was before the TimesUp movement shed light on its problematic premise. “The hot guy has a girlfriend who is drunk, remember? That’s how Molly Ringwald gets her chance with him. But do you remember what happens when she is drunk? She is passed around and “given” to the “geek” so that he can have a “good time” with her. And he does. And no one thought twice about it. Well, now I do. Read this article and consider the paradigm shift we are all in the middle of. Time is up. The party is over.”

Can you stream it? Yes, Sixteen Candles is available to stream as part of your Starz and Philo subscriptions, plus is available for rental on many other services. In an interview with Vanity Fair, Cohen let it be known that he loves Rocky and turned to the film for inspiration during his time on the game show. “I’m a big fan of the Rocky franchise,” Cohen said, ”and I really loved Creed this past year. I loved it. So I bought it on iTunes, and about once a week, I would watch it. When I was tired or didn’t really want to read Trivial Pursuit cards, I would watch Creed.”

Can you stream it? Yes, Rocky is available for rental on many other services.

On ABC Chicago News, Holzhauer’s brother said James “used his knowledge. He was very good at memory stuff,” even at a young age. ” “He could remember every single line in the movie Dumb and Dumber when he was, like, seven. He knew the names of several professional wrestling moves. He knew every baseball statistic there was to know about the Cubs.”

Can you stream it? Yes, Dumb and Dumber is available for rental on many other services.

Dumb and Dumber where to stream

Rocky where to stream

Sixteen Candles where to stream

Spaceballs where to stream