Jeopardy! producer Sarah Foss and senior researcher Michael Harris have addressed the controversy stemming from last Wednesday’s (November 16) edition of the Tournament of Champions, where fan-favorite Sam Buttrey was deemed incorrect after a divisive clue.

The moment came during Final Jeopardy! as Buttrey went up against the tournament’s eventual winner Amy Schneider and fellow contestant Andrew He. The clue under the category “The New Testament” read: “Paul’s letter to them is the New Testament epistle with the most Old Testament quotations.”

Schneider’s answer of “Hebrews” was accepted as correct, while Buttrey’s “Romans” was said to be wrong. However, many fans thought Buttrey should have been deemed correct, as there is still heated debate among Biblical scholars over whether Paul actually wrote the letter to the Hebrews. Had Buttrey’s answer been accepted, he would have won the episode; instead, He finished with the most money.

On Monday’s (November 21) episode of the weekly Inside Jeopardy! podcast, Foss touched on the controversy, saying, “[We] just want to talk a bit about, you know, I understand authorship traditionally is attributed to Paul, although some say uncertain. And in that [traditional] case, there’s only one New Testament epistle with the most Old Testament quotes, and it is Hebrews.”

Foss then turned to researcher Harris who went into more detail. “So, when it comes to Bible categories, because there are various versions of the Bible, we have taken it upon ourselves as a show to use the King James Version of the Bible as our ‘Bible of Bibles,’ so to speak. And we’ve kind of let the world know,” he explained.

“So for the most part, when contestants come, they kind of know that we are referencing the King James Bible,” he continued. “This clue, in particular, we also reached out to a seminarian who had verified that our information, as written in the clue, was correct, and that’s when we went ahead and were like ‘OK, we feel secure in our doing this clue.'”

Harris added that they “go that extra mile” when it comes to Bible clues, noting that they “reached out to someone who has more Bible and theological knowledge than us.”

“So we felt pretty sound in this clue as it stood,” he concluded. “We’re not here to try to fool the contestants in any way.”

Former Jeopardy! champion Buzzy Cohen, who was a guest on the podcast, backed up the producers, stating, “Well also, I mean the King James Bible calls it “Paul’s Letter to the Epistles,” that’s how it’s titled, so I also think, as we discussed, Jeopardy! is not going to phrase a clue to be tricky like that.”

Fans weren’t happy with this explanation, with some calling it “dismissive.” A commenter on the Jeopardy! Reddit forum wrote, “I’m curious to hear what others thought about that explanation. I thought it was a little dismissive. I would have liked to see a less defensive response.”

“How dismissive of the research stating otherwise that it’s actually Romans!” added another fan. “Why do actual in-depth research yourself when you can just play “ask a random seminarian,” eh?”

“It’s a total cop-out to avoid actually addressing it in my mind,” said another, while one viewer wrote, “In my mind, someone in the writers’ room should have said, ‘You know, there might be some ambiguity with this clue as written.’ At that point, the only proper response is, ‘Right, we can’t use it.'”

“To me this is like using one scientific journal article that no one has ever been able to recreate while ignoring the numerous other journals [that] have come to a completely different conclusion,” added another commenter. “And then saying ‘we always default to ‘Journal x.’ We’ve never officially said it, but everyone should know that.’ Total BS answer.” 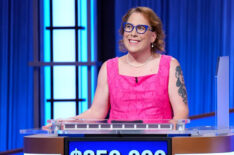 As for how the show should fix this mess? Some fans think Buttrey should be compensated. “The most fair way to make up for Sam Buttrey’s Final Jeopardy snub in TOC Game 3 is to give him $100,000 in prize money instead of $50,000,” suggested one fan.

Another added, “I’d be satisfied with them admitting their error (instead of doubling down on the Insider podcast) and apologizing to him, and giving him a slot in the next Tournament of Champions.”