According to Variety, the actors will join previously announced lead, Aldis Hodge in the project aptly titled Cross, which was ordered in October. Described as a thriller mystery series, Cross follows Alex Cross, a detective and forensic psychologist who is able to dig into the psyches of killers and their victims in order to identify and capture murderers.

Eggold will take on the role of Ed Ramsey. The character is described as having humble Midwest roots which is part of his charm, but Ed also has elbows sharp enough to carve out a space for himself in elite social and political circles in Washington D.C. and New York. The well-connected man is both smooth and devious, can be imposing when he wants to be and has some dark secrets. Initially, Eggold’s character is a fan of Cross’s, but he’ll soon become a formidable adversary.

Meanwhile, Mustafa will play John Sampson, known as “Two-John” and “Man-Mountain.” A best friend to Alex for 30 years, John is Alex’s partner on the force who is full of swagger and described as “large than life.” In the series, John believes Alex is at a crisis point in his life and hopes his pal will seek professional help.

Eggold is known for his role on NBC‘s medical drama as well as The Blacklist and The Blacklist: Redemption. The actor’s other notable credits include The CW‘s 90210 and films including BlacKkKlansman and Fathers and Daughters. 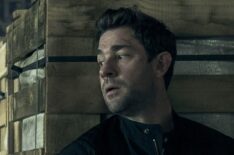 Along with Shadowhunters, Mustafa’s previous credits include IT: Chapter Two and Murder at Yellowstone City. Despite his big screen roles, Mustafa is best known for his role in Old Spice’s “The Man Your Man Could Smell Like” ad campaign.

Others attached to Cross include Ben Watkins who serves as showrunner, writer, and executive produces alongside Sam Ernst, Jim Dunn, Craig Siebels, James Patterson, Bill Robinson, Patrick Santa, David Ellison, Dana Goldberg, and Bill Bost. Meanwhile, along with starring in the series, Hodge will serve as a producer.