The Conners is staging another Shameless reunion in its fifth season as William H. Macy will be guest starring on the ABC family comedy, it’s been revealed.

The actor ,who entertained viewers for eleven seasons as Frank Gallagher on Showtime, will take on the role of Smitty, one of Dan’s (John Goodman) old high school friends who pays a visit to the Conner family in Lanford. The role will reunite Macy with his former onscreen daughter Emma Kenney who currently plays Darlene’s (Sara Gilbert) daughter, Harris Conner-Healy. The episode and airdate for the actor’s appearance has yet to be revealed, according to TV Line. Macy most recently appeared on television in Hulu’s gripping Elizabeth Holmes drama, The Dropout. He’ll be the latest Shameless star to drop in on the show, following in the footsteps of Noel Fisher who played Mickey Milkovich, Ethan Cutkosky who played Frank’s son Carl Gallagher, and Conners series regular Katey Sagal who appeared in the recurring role as Dr. Ingrid Jones in Season 9.

In The Conners, Fisher played Dan’s half-brother Ed Jr. in a recurring role, and Cutkosky was recently cast as Louise (Sagal) and Neville’s (Nat Faxon) nephew Caleb for Season 5. It’s unclear if there will be any more crossover than Kenney, Macy, and Sagal, but for fans of Shameless its sure to be a happy reunion. 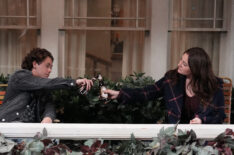 ‘The Conners’ Introduces New Relative, Plus Gets Super-Sized Season 5

Season 5 will also make way for the return of a character that fans haven’t seen since Roseanne‘s 1988-1997 run. The Conners was also given a 22-episode order for its current run, two episodes more than recent seasons. Stay tuned for updates on Macy’s appearance and role on the show as Season 5 continues on ABC.