‘The Winchesters’: All the Burning Questions Answered at NYCC Panel 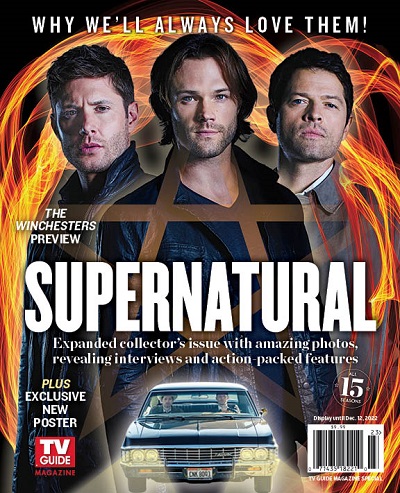 Once again, on a Sunday at a Comic Con, Supernatural, in a way, was the dominant presence, thanks to the prequel, The Winchesters.

Executive producers Jensen Ackles (reprising his role as Dean and narrating) and Danneel Ackles, showrunner Robbie Thompson, and series stars Meg Donnelly (Mary) and Drake Rodger (John) were on hand for the New York Comic Con panel, moderated by Damian Holbrook, to tease what to expect from the upcoming prequel.

Read on for the burning questions that were answered.

When did they first start talking about the prequel? They’d had the COVID break in the final season of Supernatural. With the world shut down, “we just started talking about what the expansion of Supernatural and its universe would look like,” Jensen said, noting there had been some attempts in the past. He wanted to see “the throwback to how Mom and Dad got together,” and that appealed to Danneel. She added, “we also said there had to be a Winchester.” Jensen also noted that The Winchesters was the working title, then used that to launch into the introduction of Tom Welling (he gets emails with “TW,” Welling is TW in his phone) to announce his casting as Samuel Campbell.

How close is the show to the original idea? Jensen always wanted to narrate. “I thought that would be a nice tether to the mothership, as we lovingly call Supernatural. I just thought if we could a Supernatural version of essentially How I Met Your Mother,” he explained, with Danneel interjecting that he loves that show. “It was on for a long time for a reason, leave me alone,” Jensen defended. Added Thompson, “it’s all the bones right there. How can we tell this story from a slightly different perspective?”

Should you be concerned about changes to the mythology? “We will not be doing any revisionism,” Thompson promised. “Nothing is being rebooted. We are not going to have, as Jensen likes to say, the Sam and Dean polaroid from Back to the Future fading.” He called it freeing that since they are a prequel, while people know where it’s going, being part of the Supernatural world allows them to do different things. “What exactly we’re doing will be revealed in Episode 13. … The goal of this was not rewrite or change anything” from Supernatural. How do Donnelly and Rodger see their versions of Mary and John? “I have zero intention to try to live up to Jeffrey Dean Morgan’s portrayal of John,” Rodger, who is a fan of Supernaturalsaid. “John’s controversial, so I just wanted to offer context to the character, to his life, to the aspirations and dreams he had.” He was excited to see “where he ends and go back to where he begins and show the biggest transition [he] could … who he wanted to be versus Chuck or destiny had in mind for him.”

And for Donnelly, it’s fun playing Mary since she is “a verity strong, independent woman who knows exactly what she wants and very badass, so I think with John, it kind of makes her open up. she’s a little more vulnerable. Throughout the show you see more vulnerability in Mary.” She got to show context to how Mary is an amazing hunter but wanted to get out of the life. “She’s kind of Dean, but she’s longing to be Sam. And it kind of is vice versa for John.”

How worried should we be about the gang? “Mary is definitely scared” that Lata (Nida Khurshid) could be corrupted, Donnelly confirmed. “Yes, I would be very worried,” added Thompson. He warned, “you should worry about all of these characters because it’s Supernatural. I’ll kill them all.” Pointed out Jensen, “you know what he’s capable of.”

Will the Supernatural love and connection continue? Yes, in fact, Jensen revealed that Richard Speight Jr. (who played Gabriel) is directing right now. “The Supernatural vibe is still being collectively curated by those that were there and know what it was originally,” he shared. “That’s important to all of us.” Will there be Easter eggs? Of course! There are a bunch in the pilot, and according to Jensen, “there’s a lot of subtle [ones] that we think are important but also help really tell this story and move it along.”

Will Castiel appear? “Danneel and Jensen at the beginning were like let’s establish the foundation for these kids and then let’s slowly bring some people in,” Thompson explained. “We will be bringing a lot of familiar faces. … But whether or not we see Mr. Misha Collins, I would love to see everybody back in some way, shape, or form, and I think we’ll have an opportunity to do that, hopefully sooner rather than later.”

What would be on their Mount Rushmore of Supernatural episodes? Thompson named “Mystery Spot” (and “do these tacos taste funny to you?” is Jensen’s “favorite way that Dean died”). Jensen added “The French Mistake” and “Baby.” Rodger said “Dead Man’s Blood.” Thompson added “All Hell Breaks Loose,” and Jensen finished with the pilot.

Did Jensen keep the gym teacher Dean outfit? “I believe that is tucked away somewhere,” Jensen said.

Will we see Crowley? “Sure,” Jensen said. “I’m taking requests all night, guys. Like Robbie said, if you guys give us an opportunity to tell more of this story, I guarantee you’re going to see a lot more familiar faces.”