‘I Love That for You’ Creator on the Finale, the ‘SNL’ Cameo You Maybe Missed & More

[Warning: The following contains MAJOR spoilers for the I Love That For You Season 1 finale, “Shop Cancer’s Ass.”]

Vanessa Bayer brings her perfectly cringe comedic stylings to Showtime‘s I Love That For You, a series inspired by her own experiences with childhood cancer. Created by Bayer and Jeremy Beiler (Saturday Night Live), the debut season of I Love That For You proved itself to be a singular comedy with a unique brand of humor and drama.

To keep her job, Joanna says her cancer has come back. The lie spirals out of Joanna’s control until she ultimately comes clean at the end of Episode 7. She tries to pick up the pieces of the relationships she broke in the I Love That For You finale, which worked with some friends, but not with others (and not, it seems, with her new love, Jordan, played by Paul James).

Here, Beiler breaks down the I Love That For You finale, highlights some favorite moments from the season and how they were created (including a SNL cameo we sure as hell missed), and looks ahead to a possible Season 2.

Comedy debuts Sunday, May 1 on Showtime, and April 29 on streaming and on demand.

Did you always know the season would end with Joanna telling the truth?

Jeremy Beiler: I think we always felt that the show would outlive the lie. The show has its own engine to it and its own world that exists with or without the lie. This just felt right. To put a light word on something that’s actually incredibly heavy and awful, [Joanna’s] shenanigans will continue forever.

That’s hinted at the end of the finale when she gets the interview offer from HSN. It seemed like she saw an out and was like, “Oh, I’m gonna take it.”

Yeah. I think part of the struggle for her character is this tension between connection and friendship and her ambition, which is a really raw ingredient in who she is. So I think that tension will continue.

If Beth Ann (Ayden Mayeri) hadn’t caught her red-handed, would Joanna still have come clean? She got a trifecta of guilt, too — first from her parents and Beth Ann, then her nurses from her childhood cancer treatments.

My opinion is that yes, she would have come clean anyway. I think she was struggling with so much of what she was carrying. So much was weighing on her. I don’t think there was any way for it to go other than her, at some point, coming clean. The choice that she’s ultimately making is toward the friendships that she’s built and the connections. It’s always been a little bit about, “Am I a bad person? Am I a good person? Who am I at the end of the day?” I personally would like to believe that she’s a good person who does really awful things. [Laughs]

I think she probably would’ve gotten there, but what ends up happening in the finale is all these things start piling on and it forces her to reckon with it perhaps sooner than she wanted to or intended. It all comes back to her and pins her into a corner in a very immediate way in the finale.

Jackie seems a bit eager to forgive Joanna, and there’s some clear love between them. Can their friendship make it through?

It’s funny, because in that final scene, we do suggest that there is some type of repair, some type of friendship that can survive. There’s also something a little spooky about how easily that comes. We’ve left ourselves a lot of open doors and possibilities in ways that are really exciting for us and in ways that our writers truly were brilliant at triangulating. But speaking for myself, I could imagine that if Jackie and Joanna are taking (in the penultimate scene of the [finale]) a step forward, I can imagine there will be steps back.

Let’s talk about the f**k baskets. What’s in them?

Somewhere in our giant folder of writers’ room documents, there’s a gigantic list of things that might be in them. Chocolate-covered almonds, the Scrub Daddy, things like that. Iconic stuff that would’ve been sold on SVN.

I think for Patricia, there is no moment of her life that’s not a marketing opportunity. When she sleeps with a guy, she’s looking to gain another audience member for SVN. A corkscrew wine bottle opener, a cheap pair of socks, a sleep mask, a fidget spinner, the list goes on. Just more things to put in the plastic island in the middle of the ocean.

It makes so much sense that Jackie is a hoarder. Are all of the items in her house actually home shopping products?

There’s a snow globe collection that is the personal collection of our production designer. There were a couple scripted things, like the stack of Easter Peeps.

In the world of our show, this is all stuff Jackie has ever sold. She really identifies with the shoppers because she is one, and that’s what makes her so amazing at her job. It’s also a way to show the level to which she’s in love with stuff and the pedestal she puts things on that allows her to be a star of a home shopping network. The sarcophagus bar, that was something one of our writers found online. We couldn’t stop talking about this sarcophagus in the writers room. That someone would purchase a sarcophagus and put it in their living room made us laugh so much.

Among so many fake people at the network, Jackie is kind of like the true north. Did you create the role with Molly Shannon in mind?

When Vanessa and I came up with Jackie Stilton, I don’t think we even dreamed that we would have access to someone as amazing as Molly Shannon or that she would want to do it. We completely lost it when we found out we had her. It was just way too perfect. She’s just so brilliant at being uproariously funny while being so truthful and so grounded, which is really the tone that we wanted for the show. A show that you can really laugh at — not just funny-ish, but funny — but also that’s grounded and truthful and doesn’t feel fake. It’s one of the honors of my life to have been able to work with her.

The format feels like sketch comedy jokes with that chaotic, unexpected punchline paired with emotionally real storylines. I think that sets the show apart.

That really makes me happy that you picked up on that aspect of it, because that’s really the grand experiment of the show. Tonally, it can be so strange. It was a moment-to-moment thing to figure out how to have a show that is as funny as a crazy sketch that can be off the wall and ridiculous, but also one that you believe and one that’s dealing with this really heavy subject matter. So finding that tone was really an experiment for us. And hopefully it’s unique in a good way.

I loved the “are eggs dairy” bit. How long was that scene before editing? I’m picturing Ayden and Johnno just riffing on a roll for a while.

There is a clip out there from QVC that we based that moment on. It’s a sort of well-known viral clip from QVC where some of the hosts start debating whether the moon is a star or a planet while selling a line of sweaters or shirts or something.

[Ayden and Johnno Wilson] did riff. In every scene that they’re in, they’re so gifted at adding comedy and riffing and giving us a million options. Editing the show is really difficult in that way, because people just give you gold in every corner of the footage. When Vanessa and I first wrote that scene, we got multiple notes on it that it was too long. We just couldn’t stop writing it. It was making us laugh so hard. We saved that scene as a reward for ourselves after writing others, because we knew that it would be so much fun. On the page, it was far too long, but when we shot it, there was an embarrassment of riches. But I think part of what’s amazing about it is how it doesn’t stop.

There are more ‘90s references in this show than I can count. Monica from Friends, all the Princess Diana references, and of course, Ryan Phillippe. How did you get him? Were any other ’90s heartthrobs you considered?

At some point, there was a pretty good list of ideas for that part, but when we saw Ryan Phillippe’s name on there, we were like, “It has to be him.” And then, he wanted to do it! We screamed. Speaking for myself, as a high schooler, I had a massive crush on him, so I was really able to identify with Joanna on that.

When Perry is frosting that cake and Darcy [Matt Rogers] comes up behind him, that to us was inspired by that moment in Ghost when Patrick Swayze comes up behind Demi Moore as she’s doing pottery. We tried a cut of the pilot with “Unchained Melody.” There’s an edit of that entire montage at the end with that song.

Were there other ideas for his brand? There are so many you could troll.

I think there was one version of the script where he mentioned a tequila brand, but steaks really was the first and only idea. We had that idea for years. Back when we were developing the pilot, for some reason there was something so funny to us about steaks. 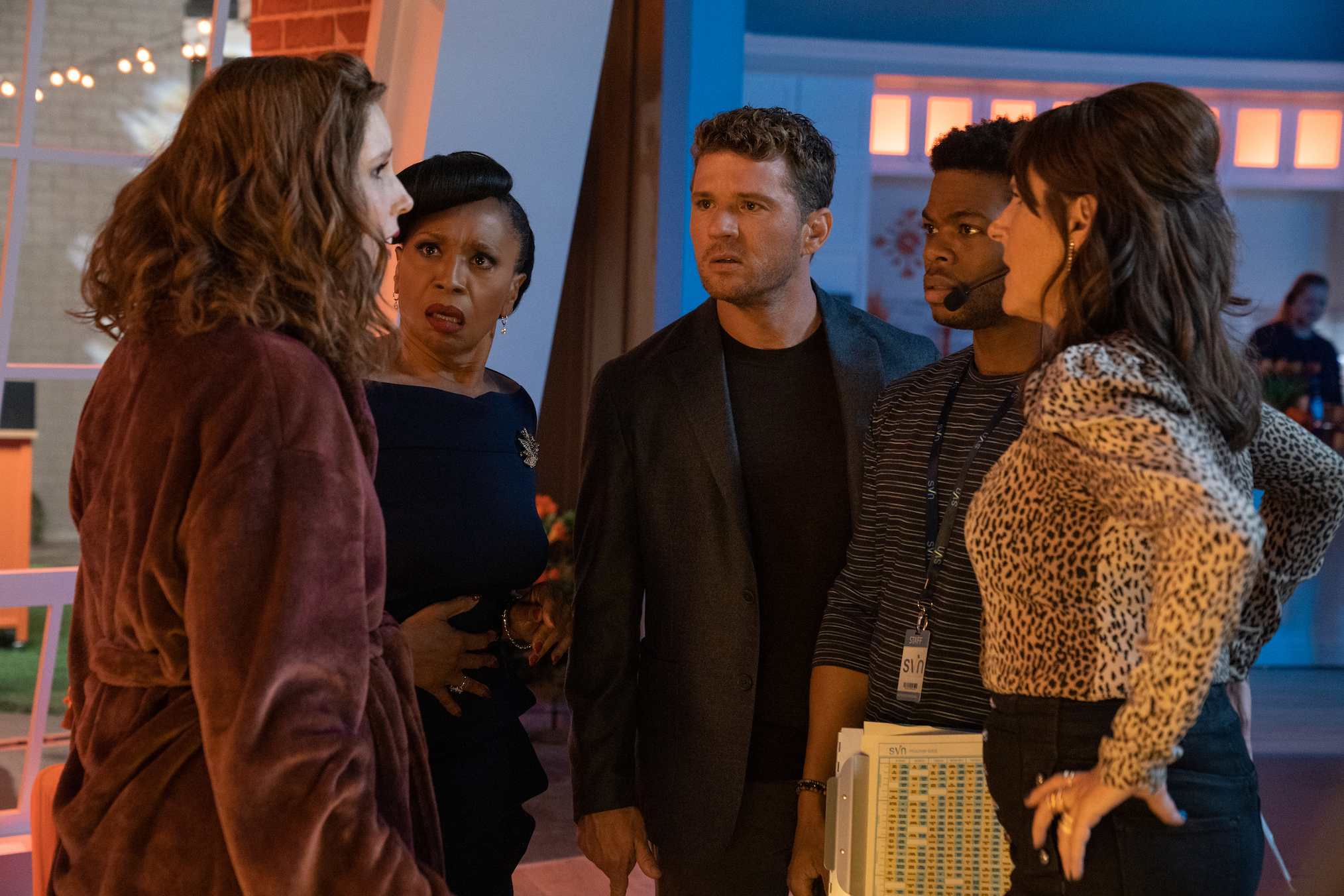 Could we see more appearances from SNL alums in the future?

That would be great! I hope so. I would have to imagine that we could find a way to get them on.

Oh my God. I love Bowen. That would be great. This is a slight Easter egg: In Episode 2 when Jackie’s husband calls in, that’s Beck Bennett on the phone. Go back and watch, it’s pretty fun.

I Love That For You, Season 1, Streaming Now, Showtime