‘The Resident’: Are Conrad & Cade’s Lives Now in Danger? (RECAP)

[Warning: The below contains MAJOR spoilers for The Resident Season 5 Episode 18 “Ride or Die.”]

Is Dr. Conrad Hawkins’ (Matt Czuchry) life now in serious danger on The Resident? We’re certainly worried after the wrong person gets a very good look at him at Chastain in “Ride or Die.”

After another patient comes into the ER after overdosing on meds in his name — another fraudulent prescription out there — Conrad puts on his detective hat and heads to the pharmacy that filled both. The pharmacist, Phoebe (Tiffany Kyle), says she thought he’d written them. “I didn’t realize patients were overdosing,” she says. “I just fill the prescriptions that come in.” He tries to appeal to her with his concern for future ODs, and after looking around, tells him she’ll pull some records. But in the file room, a man approaches her with questions about Conrad. She claims he’s just a patient who wants a refill. But Conrad must leave when Dr. Kincaid Sullivan (Kaley Ronayne) lets him know the Go Team has been activated.

Then, Phoebe’s brought into the ER as a patient after being found unresponsive at the bottom of the stairs to her apartment. A neighbor said she was acting drunk and hysterical. When Conrad tells Cade how he knows her, she warns him this could be blowback from his visit. He knows. Someone could have pushed her down the stairs, Cade continues. Or she fell, Conrad suggests the less likely option.

According to her labs, however, Phoebe wasn’t drunk. Conrad insists no one could have seen him at the pharmacy, and Cade wants to know why he went without her. It’s not that he needs her permission, she explains, but rather her “help,” given her history. Prescription drug scams are favored by mob, and they kill people who threaten revenue stream. That’s why they handed this over to the FBI, she reminds him. But Conrad can’t have his name on bottles of drugs killing people, and yes, if he caused Phoebe’s injuries, he’ll feel guilty. 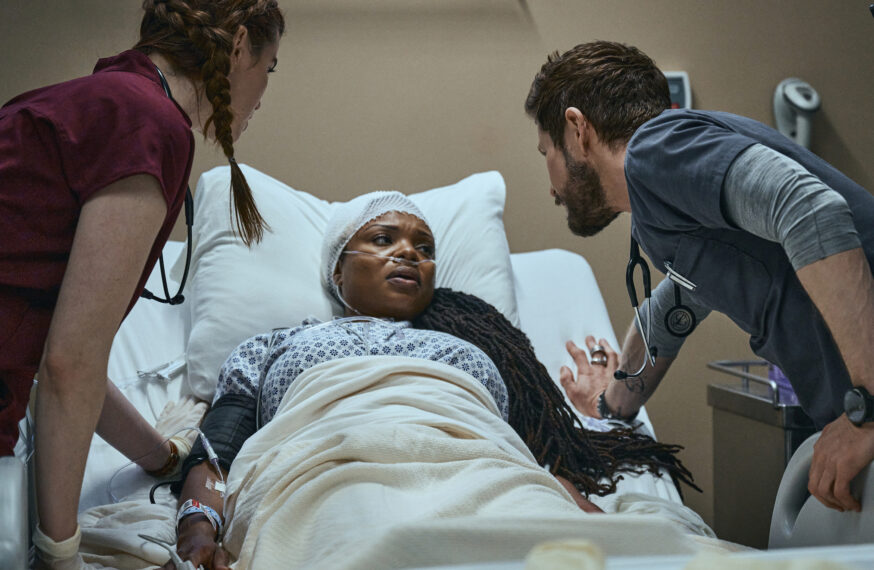 While Dr. Billie Sutton (Jessica Lucas) is able to take care of Phoebe’s brain bleed, she’s in respiratory distress and altered when she awakes. They have to intubate and figure out what’s going on because she’s showing signs of trauma that can’t just be from her fall. Whatever it is is undetectable in her labs, but Conrad realizes, “what if it’s because you can’t actually see it?” They make their own blacklight using markers, tape, and an iPhone’s flashlight and see the traces of fluorescein around her mouth and on her fingers. She was poisoned with antifreeze. Someone tried to kill her by making her drink it, and she fell trying to get away.

The good news: There’s an antidote and they have proof of an attempted homicide. The bad news: By the time Conrad, Cade, and a security guard reach Phoebe’s room, the man from the pharmacy is coming out of it in scrubs. He sees both doctors, then he runs. The guard chases him, but it’s too late to save Phoebe: The man disconnected her vent and turned off her heart monitor.

While Conrad now blames himself, FBI Agent Baker (Dave MacDonald) assures him it’s not his fault. Phoebe was being blackmailed and forced to not check prescriptions, and she agreed to wear a wire for FBI. Someone must’ve found out. “The mafia always takes retribution,” Cade says. And while she and Conrad got a good look at the killer, that means he also got a good look at them. That means Cade has a decision to make. Does that mean she’s leaving Chastain? She doesn’t want to, she admits to Conrad. “We don’t want to lose you, but if you’re in danger…,” he tells her. “We?” she asks. “Chastain,” he corrects himself, adding, “All of us.” And while they did get into it when they disagreed over a course of treatment at the scene of an accident earlier, they’re “always” friends, he says. Both like working with colleagues with strong opinions … to a point. “Whatever comes of this, we’ll fight this together,” Conrad assures Cade.

Meanwhile, the most heartbreaking part of the episode comes with Dr. AJ Austin (Malcolm-Jamal Warner) and his mother. Carol (Summer Selby) has been having issues with pain, they explain to Dr. Devon Pravesh (Manish Dayal). “My bad days are getting worse. My good days are, too,” she admits. As they discover, that’s because her cancer has progressed to her chest walls and brain. When Devon gently checks that AJ knows what means, the surgeon shouts, “Yes, I understand the prognosis, Pravesh! I’m a doctor!”

AJ delivers the news to his mother: She maybe only has a couple of months. And so he wants to make sure she gets everything she needs. What are her most important goals now? “Leaving here, staying home with you,” she says. And what are her biggest fears? “I don’t want to spend any more time in a hospital.” That means it’s time to talk about hospice, and he explains that it’s not only for the “very end.” Rather, it’ll help her manage pain and be more comfortable. “I promise you, you will never have to set foot in this hospital again,” he tells her in the most emotional scene of the episode. 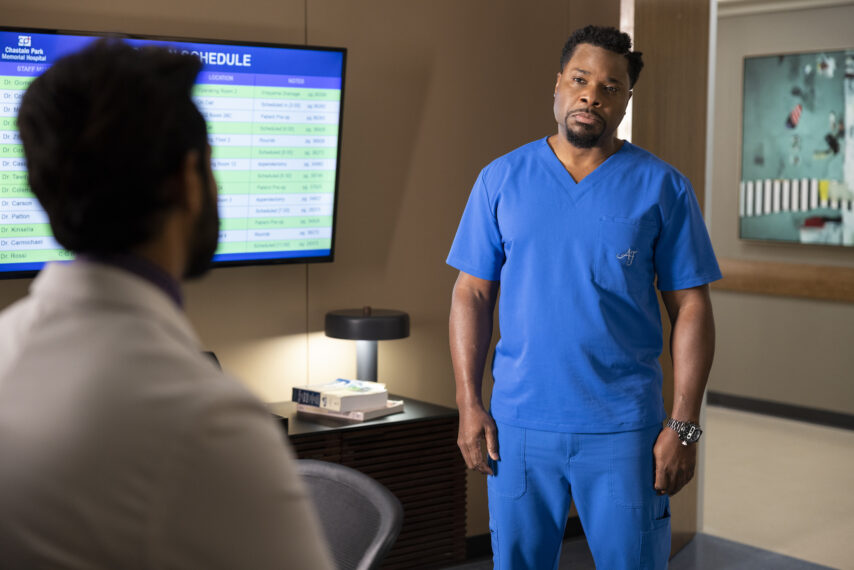 The first step is Billie inserting a nerve blocker for her pain that will last several months. It’ll be enough, AJ says before telling her and Devon, “My mother and I want to thank you for the exceptional care that you have provided. You’ve been nothing short of remarkable. You’ve helped with some really tough decisions, and you have shown me the power of compassionate comfort care, and I just want you to know it means a lot. It makes all the difference in the world. I know my mother will hold all of you in her heart for the time that she has left.” And then AJ brings Carol home, where he has everything set up for her.

Finally, the light-hearted moments of the episode come from Dr. Kit Voss (Jane Leeves) and Dr. Randolph Bell (Bruce Greenwood). Bell meets the nocturnal anesthesiologist, Dr. Jayci Lee (Jeena Yi) — Kit snatched her from Atlanta General, and she’s a big get for Chastain — who tells him to make himself useful and push meds for her. “Most people don’t like working nights,” he remarks. “I come alive when the sun goes down. That’s when I come out of my coffin,” she quips. And when “Boss Voss,” as Lee calls her, says she’ll see her in the OR later, the anesthesiologist says, “Party! I’ll bring the drugs.” Then, with Bell noticeably getting tired, though he denies it, heading into another surgery, Kit has a chair waiting for him in the OR. “Your throne, Dr. Bell,” Lee says. And after she comes up with a brilliant save during the surgery, she thinks Bell’s “coming around” to her. We just hope this isn’t the last time we see her.

Will Cade be able to stay at Chastain? And is it just a matter of time before something happens between her and Conrad?