Roush Review: Getting Stuck on the ‘Wheel of Time’

If there’s such a thing as fantasy fatigue, I first experienced it in the early 2000s, when I stalled somewhere around the eighth or ninth book in Robert Jordan’s epic (as in overlong) The Wheel of Time series, at a point during the Lord of the Rings wannabe where nothing much was happening for hundreds of tedious pages. (Spoiler alert: Jordan died before finishing the series, and let that be a cautionary tale for others who have lost control of their sprawling sagas.)

The Wheel has finally been adapted for streaming on Prime Video, and while the lavish first season is eventful enough, it’s burdened with clunky exposition, and here are some prime examples: “That child is coming of age now and we must find them before the Dark does.” “The old blood runs deep in those mountains. Let’s hope it’s prepared them for what’s coming.” “There are neither beginnings nor endings to the turning of the Wheel of Time. But it was a beginning.” Much of this ripe recitative belongs to the series’ MVP, the mighty Moiraine (a glassy Rosamund Pike), a sorceress from the elite and feared Aes Sedai sisterhood. 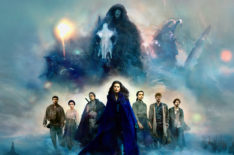 'The Wheel of Time' Rolls Out a New Immersive Trailer (VIDEO)

One of the reasons Jordan’s tomes endure is the agency and power given to its female characters. But with a deficit of whimsy and wonder — oh how I longed for someone with the wit of that Game of Thrones imp Tyrion Lannister — Wheel introduces such thinly developed characters that it makes it hard to care (or see) who survives a chaotically filmed attack by monstrous orcs (sorry, trollocs). Thrones fans may be further dismayed to learn that the much-talked-about Dragon Reborn is but a metaphor for the rebirth of a possible savior.

It’s the mysterious identity of this Dragon Reborn that brings Moiraine into the remote Two Rivers region, where the mythical figure of legend could be one of five village youths wrangled for a long — in my case endless — quest. Pike’s star casting shifts the narrative’s balance from the young adults, a particularly colorless crew, to the magical and political intrigues of the Aes Sedai, whose One Power cheesily manifests as wispy white tendrils. But as one of her charges rightly notes, “The lady does shoot fireballs, so let’s try and stay on her good side.”

As this Wheel slowly turns, I’ll wait instead for Prime Video’s Lord of the Rings prequel, set for next year.