Very few arcade games have stood the test of time like Frogger, which was launched in North America by Sega in 1981 and spawned many remakes. The objective: Get a frog to safety by helping it cross a traffic-filled street and a hazardous river. (Look out for that alligator!)

Now, Peacock has turned Frogger into a live-action competition series where the contestants are the ambitious amphibians. Two players go head-to-head, racing the same crossing in an attempt to finish with the most lives left (or get the farthest before they expire). Three champs advance to each episode’s bonus round. Let’s hop through a sneak peek. The cast and crew had loads of inspiration bringing the iconic bumper-to-bumper round to life, thanks to about 20 Frogger arcade games on set. “It was a dream situation, because they had endless credits,” says exec producer Paul Franklin, who adds that cohosts Damon Wayans Jr. and NFL Network’s Kyle Brandt enjoyed “watching each other fail.” 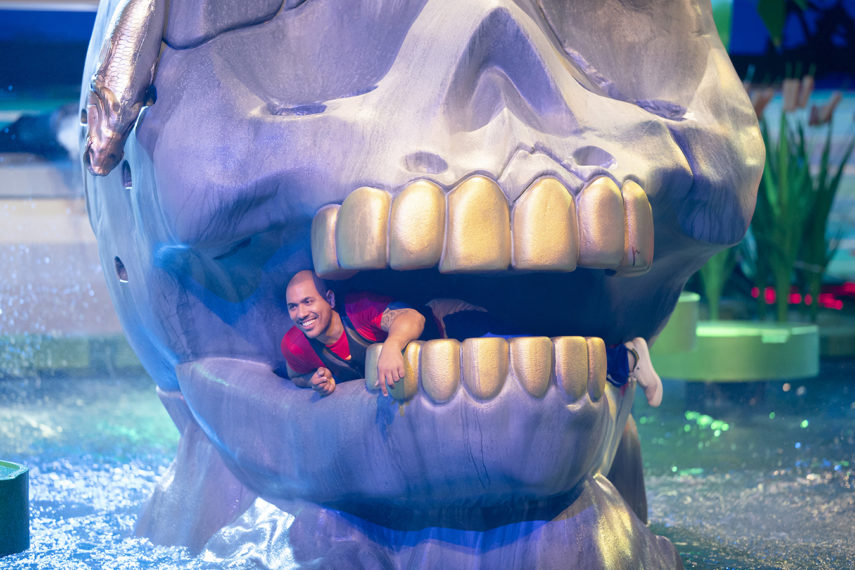 The show’s sets were built by Eureka Productions, which created Holey Moley’s mega mini-golf course. Here, players start on a pirate ship. They latch on to Polly the Parrot and zip-line across water, jump to a rock, climb around or through a gold-toothed skull (above), and dodge gators. “Water cannons try to shoot you the whole time,” Franklin adds. The show, Franklin says, aimed for a “real variety” in its six crossings (see also: Frogs in Space!), but this sticky one certainly takes the cake. “It makes no sense,” the EP admits with a laugh. “You’re jumping from candy canes to chocolate bars to try and put a birthday candle in a cupcake and then tightrope-walking across red licorice [above].” “It’s massive,” Franklin says of the pyramid set for the Boss Toad Bonus Round. “I think we built it too big because when you’re on top, you can almost reach out and touch the lights.” In this final level, champions from the episode’s three rounds battle to find the most hidden baby froglets. The prize? A gold fanny pack with $10,000 inside.

Frogger where to stream