The Conners is finally unveiling its long-rumored returning character in new first-look images for the January 11 episode, “Two More Years and a Stolen Rose.”

Eric Allan Kramer, who played Bobo in Roseanne‘s Season 1 episode, “Dan’s Birthday Bash,” will officially reprise his role after more than 30 years. As viewers of Roseanne may recall, Bobo owns a snowplowing company and has quite a temper when he drinks, as is teased in the newly-released photos from the upcoming episode of The Conners.

TT… One from ROSEANNE, the first sitcom I ever shot after moving to L.A. pic.twitter.com/6OSMtxm4kB

But he’s not the only big guest star featuring in the installment, with William H. Macy stepping in to play Smitty Cusamano. So, who is Smitty and what brings him to Lanford? The death of a beloved teacher from Dan (John Goodman) and Jackie’s (Laurie Metcalf) high school brings old classmates together, according to the episode logline. One such classmate is Smitty.

As was previewed in an exclusive first look from TV Insider, Smitty left Lanford to find fame and fortune in the pool supply business, and when returning for his former English teacher’s funeral, he gets a little showy in front of his old pals. Dan doesn’t seem so amused though as they come face-to-face in Lobo. According to executive producer Bruce Helford, Smitty used to date Roseanne (Roseanne Barr) before she was married, and Jackie once had a crush on the now-successful businessman. 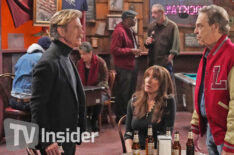 William H. Macy Is a Blast From the Past in 'The Conners' First Look

Along with building tension between himself and Dan, Smitty’s presence makes way for a mini Shameless reunion as Macy reunites with former costars Emma Kenney and Katey Sagal, who play Harris and Louise. As for what else fans can expect, Becky (Lecy Goranson) is asking Darlene (Sara Gilbert) and Ben (Jay R. Ferguson) for a big favor in the highly-anticipated installment.

Below, get a closer look at the episode, and don’t miss Kramer and Macy’s guest-starring appearances on The Conners in “Two More Years and a Stolen Rose.”