While major TV series crossovers have become an annual event for some shared universes, like Arrowverse and One Chicago, smaller events (like Chicago Med, Fire, and P.D. have done often) and unlikely ones (like Bones and Sleepy Hollow in 2015) are just as fun.

And now, it may not be as easy to have many (or big) crossovers, due to the new guidelines in place for filming in the midst of the coronavirus pandemic. Still, we're hoping to see some team-ups at some point in the near future. Hey, if Grey's Anatomy and Station 19 can pull it off for their fall premieres, why not these other shows? 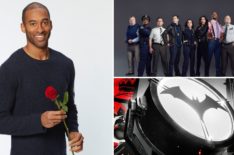 There's still a bit of time before these series return with new seasons.

So, we've gathered our dream crossovers below, from the probable (like something in the NCIS franchise and the connected series in that universe) to the least possible (like Prodigal Son and Brooklyn Nine-Nine). Bear in mind, we haven't included the obvious ones like the aforementioned One Chicago series or the Law & Orders.