It’s been a while since we last spent time with Jamie (Sam Heughan) and Claire (Caitriona Balfe) at Fraser’s Ridge, but Outlander fans are being given a brief solace in the form of a podcast.

Hosted by showrunner Matthew B. Roberts, The Official Droughtlander Podcast, features interviews between Roberts and special guests in which they share behind-the-scenes secrets. In the first episode, Roberts and fellow executive producer Maril Davis spilled some facts about Outlander‘s TV history, and more.

Below, we’re breaking down all of the interesting facts you might want to know more about.

Roberts revealed that early on in his career, he’d been tasked to read a few of the Outlander books. “I did a pass for this production house because they wanted to make a TV movie,” he said, adding that “you wouldn’t be able to get the richness of the novels in that short of time.” So, instead, Roberts walked down to Davis’ office, “I gave you the books and next thing you know, here we are.”

Starting From Scratch in Scotland

“When we first got to Scotland way back in 2013… there was nothing there,” Davis recalled. “Obviously, we wanted to film in Scotland because that’s where the books take place, but as you know,” she said to Roberts, “it’s very rare that you get to actually film something in the actual location.” 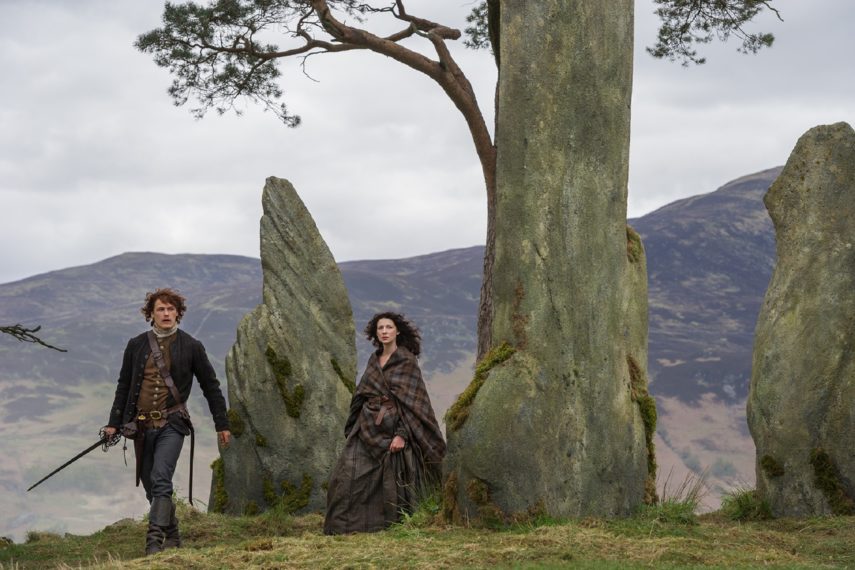 Luckily the production team was really driven despite the fact that Scotland didn’t have much of an infrastructure for filming. “We took an old cell phone warehouse,” Davis revealed, “and it was just gutted. I do remember walking in there and thinking, ‘how is this gonna become a studio?'” Ultimately it did, and the show’s production in Scotland has allowed for plenty of job creation and opportunities, they’ve even retained about 95 percent of their original crew since the show began.

When it comes to bringing Jamie and Claire’s story to life, “the more you continue, the more difficult it gets,” Davis shared. Adapting isn’t getting any easier as the story shifts to focus on more characters and follows them to new lands.

“Once you start traveling, once you start going away from Scotland for Scotland, then it becomes more difficult,” Roberts added. “Everything has to be prepared so far in advance and that to me is what’s harder to translate, because Scotland, as wonderful as an actress as she is, she has to play North Carolina now, and that’s no small feat.” As for choosing which moments will make the show or not, Roberts said when moments are “unproducable,” that’s when they’re cut from the show. Another challenge is when the cast is unavailable, one example the executive producers point out is Laura Donnelly who portrayed Jamie’s sister Jenny Murray. Since she’s a character who has recurred occasionally over time, securing a contract is difficult, and so storylines involving her might be harder to include in the show.

Most Difficult Scenes to Produce

Among some of the more difficult moments to capture on camera were “oddly enough, the buffalo scene from last season,” Roberts said. It was a challenge since filming had to take place partially on a buffalo farm, rather than at the Fraser’s Ridge set. He also shared that for Season 2 episode, “Prestopans,” they had to “build a huge marquee or tent” to create a controlled environment for the battle scene which featured foggy mist. One questioned posed to the producers included challenges with local wildlife and whether or not it has ever impacted filming. While Davis and Roberts didn’t have any specific issues with wildlife, actor Graham McTavish, who portrayed Dougal MacKenzie, did. “We were filming a scene by a lake with all the guys and there might have been some wild swans, and I believe Graham McTavish might have been scared by this wild swan,” Davis revealed, but added that she’ll have to confirm that detail with McTavish.

See what else the executive producers had to say in the full podcast episode, below, and stay tuned for more behind-the-scenes secrets as The Official Droughtlander Podcast continues.