Some soulmates express their togetherness by posting Instagram pics in his-and-hers pajamas. That kind of stuff is child’s play for rich-and-famous tech billionaire/narcissistic genius Byron Gogol, played by Billy Magnussen (Maniac) in this dark comedy adapted from the 2017 novel by Alissa Nutting.

His newest product: chips implanted in couples’ brains that allow them to meld minds and experience the world as one. When his pampered, bored wife Hazel, played by Cristin Milioti (Palm Springs) discovers he’s made her “user one” without her permission, she escapes their luxury compound (where computer generation makes anything possible) before he fully activates the devices. 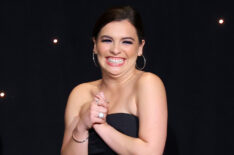 'Head Of the Class' Reboot Gets Series Order at HBO Max

The chase is on. And a hilarious one it is. Thanks to the chip, Byron and his team can track Hazel. They’re surprised at how quickly she readjusts to the real world — we learn she used to be a scrappy con artist — and she soon does some serious damage to the lackeys Byron sends to retrieve her. Hazel also finds a physical refuge, if not emotional one, in the humble home of her lonely, widowed dad, Herbert (Ray Romano, Everybody Loves Raymond) who’s in a dysfunctional relationship like no other.

When Byron refused to understand why anyone would have a problem with losing her individual identity, Hazel is incensed. Unable to agree, he considers darker means to resolve the situation.

TV insider chatted with Magnussen about the joys of working with Milioti and Roman, his feelings own feelings about love, and more.