The 2021 Golden Globes had plenty of memorable moments, from cringe-worthy technical mishaps to adorable exchanges and just about everything in between. The mostly virtual event may have seemed longer than usual, but it still entertained.

Below, the top 13 buzz-worthy moments. Golden Globes 2021: A Live Update of the Night's TV Winners

Things started off not so hot as the actor, who won for his role in Judas and the Black Messiah, had a tech mishap that kept us from hearing his speech. Thankfully, before the show cut his feed, the audio came back and Kaluuya had his moment in the sun.

Daniel Kaluuya wins the award for Best Performance by an Actor in a Supporting Role in Any Motion Picture at The #GoldenGlobes. pic.twitter.com/3xHF3KRccm

Catherine O’Hara’s Husband Plays Her Off the Couch

After winning the award for Best Actress in a Comedy TV series, Schitt’s Creek‘s Catherine O’Hara had her speech awkwardly cut off by her husband Bo Welch when he played applause and music from his phone. If it was a bit, we’re pretty sure it sounded better on paper.

Her favorite season is Awards. Catherine O’Hara wins the award for Best Performance by an Actress in a Television Series, Musical or Comedy at The #GoldenGlobes. pic.twitter.com/kjQynLMwfm

Mark Ruffalo’s Family Gets in on the Action

During the actor’s acceptance speech for his role in HBO’s I Know This Much Is True, Mark Ruffalo‘s wife Sunrise Coigney and kids showed their excitement on Zoom.

Mark Ruffalo wins the award for Best Performance by an Actor in a Limited Series or Motion Picture Made for TV at The #GoldenGlobes. pic.twitter.com/1ZrFIN8t7K There was scarcely a dry eye when TV icon Norman Lear accepted his special honor. In a sweet nod to the award’s namesake, Lear ended his speech with a knowing pull of his ear as a thank you to Carol Burnett.

What a career! Norman Lear accepts The Carol Burnett Award for outstanding contributions to television at The #GoldenGlobes. pic.twitter.com/gvGNGRKfFu

Don Cheadle Tells Jason Sudeikis to Wrap it Up

After winning for Best Actor in a Comedy TV Series, a seemingly stunned Jason Sudeikis thanked his Ted Lasso costars and then was at a slight loss for words. Fellow nominee Don Cheadle jokingly circled his finger, signaling the casually dressed winner to wrap it up.

Score! Jason Sudeikis wins the award for Best Actor in a Television Series, Musical or Comedy at The #GoldenGlobes. pic.twitter.com/AQHfuDHBXX

Poehler’s former Saturday Night Live colleagues Maya Rudolph and Kenan Thompson crashed the California stage in character as faux winners to gum up the works, according to Poehler’s introduction. That they did, perhaps unintentionally, as the sketch was not all that. Golden Globes 2021 Monologue: How Did Tina Fey & Amy Poehler Do From Opposite Coasts?

Celebs Get Some Medical Advice

Some of the night’s stars, including Lin-Manuel Miranda, Zoomed with real-life doctors to get some pop culture-related medical advice.

Jodie Foster couldn’t get over her win and the delayed reaction of her friends downstairs made for one of the nicest most authentically sweet moments.

Jane Fonda wowed during her acceptance of the Cecil B. DeMille award with a rousing talk about the need for diversity and the role artists play in advancing important causes.

Jane Fonda accepts The Cecil B. DeMille Award for outstanding contributions to the world of entertainment at The #GoldenGlobes. pic.twitter.com/TpHzoMs9yp 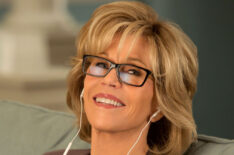 Lee Isaac Chung accepted the award on behalf of the Minari team with the help of a tyke-sized supporter in a heartwarming speech about family.

All Kids Know Who Chadwick Boseman Is

In what was by far the sweetest moment, when in a pre-taped segment a bunch of kids answered almost every question comically wrong, all were able to excitedly identify the late Chadwick Boseman — who won a Golden Globe for his work in Ma Rainey’s Black Bottom — as the Black Panther.

Everyone knows who the #BlackPanther is! #GoldenGlobes pic.twitter.com/1G4yxgNWIw

Kristen Wiig and Annie Mumolo, the stars of Barb and Star Go to Vista Del Mar, made a special presentation with a midwest twist.