It’s hard to believe it’s been a decade of hit TLC series Sister Wives. The Brown family made polygamy a household term (for better or for worse) while giving audiences a glimpse into what life is like with four wives. Well, life has lots of drama, apparently.

Patriarch Kody Brown lives in Flagstaff, Arizona, with his gang of sister wives, as permitted under the fundamentalist Mormon faith (and recently decriminalized in Utah). Wives Meri, Janelle, Christine, and Robyn have had their fair share of ups and downs raising a combined 18 children. Now, in the Season 10 premiere, it’s clear that some of the Brown family has had enough. Amid the COVID-19 pandemic, each wife and their respective children are living in separate temporary homes, and emotions are intensifying. Christine even threatens that she can’t “do marriage with Kody anymore.” 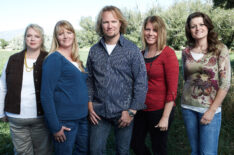 'I like marriage, and I'm a repeat offender,' Kody quips in the opening minutes of that first episode.

In the exclusive clip above, there is a glimmer of hope for the Browns: The wives are all. becoming grandmothers! The large family meets daughter Maddie Brown’s baby girl Evie with husband Caleb Brush. Evie was born with a rare medical condition that affects her limbs, and the family is ready to support Maddie during Evie’s surgery.

“I guess I’m just hopeful and optimistic that her little strong body and strong mind are going to prevail here,” Janelle confesses.

The sister wives also share their different titles for “grandma.” Baby Evie will have four times the love.