For 90 Day Fiancé fans, Shaun Robinson has been the long-time voice of reason during Tell All reunion episodes. Now, the Access Hollywoodalum is turning the tables and calling the shots with her own Discovery+ show, 90 Day Bares All.

The highly anticipated series launched on the streaming platform January 4, and has been grabbing headlines ever since. Robinson has placed current Season 8 couples in the hot seat, while reuniting past costars (and of course, exes) to rehash the drama and catch up. From 90 Day stars opening up about their sexuality to even poking fun at their partners — we’re looking at you, Rebecca and Zied! — Bares All has brought a late-night talk show approach to all our favorite former cast members. Streaming Service Spotlight: Everything You Need to Know About Discovery+

Find out where you can stream the reality-TV lover's dream. Plus, what shows are available.

Below, Robinson opens up about the origins of the “sexy” series, her favorite guests thus far, and how Bares All will handle highly-anticipated 90 Day spinoff The Single Life.

How did you first become connected with the franchise?

Shaun Robinson: I was on Access Hollywood for 16 years, at the time when it was the second of only really two premiere entertainment shows, and now people tell me the first time they see me is with 90 Day Fiancé! I’ve been a part of the TLC family since I was still at Access Hollywood [before leaving in 2015]. I hosted a couple of the other shows like My Big Fat Fabulous Lifewith Whitney Thore and the reunion show for My Giant Life. So when they asked me to do the reunion show for 90 Day Fiancé back in 2016, I said, “Well, send me some clips, because I haven’t seen the show.” They sent me clips, and I was like, “OK, this is kind of cute, but the show will probably last a couple seasons but that’s it.” And here we are! It expanded to Happily Ever After?, Before the 90 Days, The Other Way, and a whole bunch of others in between. It turned into something that I don’t think anybody ever predicted.

90 Day Bares Alltruly feels like your own talk show, and just the natural progression of the franchise. How does Bares All differ from hosting reunion episodes?

When Howard Lee, President of TLC, first came to me, we had this huge Zoom call and he was describing Bares All. He was telling me that it was content that viewers have not seen on linear TV — and not only have they not seen a lot of it, they could not see a lot of it, because there were certain things we could not show on regular TV. The Tell All brings these people together and they have some issues with each other because they’re in the same season. But Bares All brings everybody from the entire 90 Day universe together: people from past seasons, current seasons, people from behind-the-scenes that you didn’t see. Is there anyone in particular you’ve especially loved having on Bares All?

People ask me all the time, “Who’s your favorite couple?” and it’s kind of like saying, “Who’s your favorite child?” There are some who I have become a little closer to, like David and Annie Toborowsky. You can’t help but love David and Annie! It’s so funny because the relationship that I’ve had with them has changed over the years. At first, I did not like David at all. I felt Annie should go back to Thailand and just forget about this guy! But then, obviously, we see now that their relationship has grown and they really love each other. They are a perfect match, and they are so much fun together. 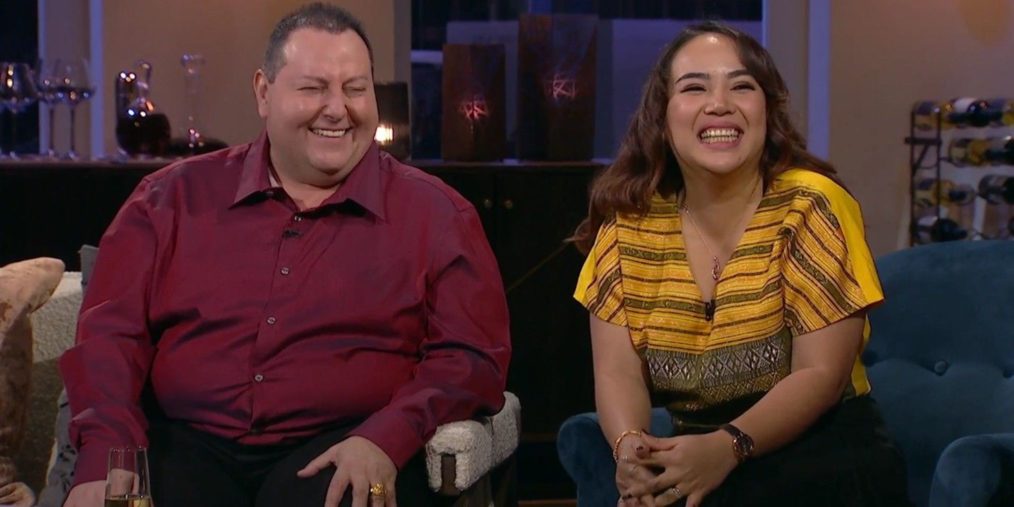 I love Angela Deem, and people may be shocked by that, but I really do. I see the soft side of Angela, and I tell her that I want her to behave — but I really do love her, and I love that she has found love with Michael [Ilesanmi]. They really love each other. And then Darcey Silva, she is so sweet. I want her to find forever love.

90 Day: The Single Life premieres February 21, while Bares All is still in production. Can we expect the cast of Single Life to appear on Bares All?

I’m looking forward to The Single Life! We have Molly Hopkins on Bares All. She did a bra fitting for Rebecca [Parrott], and Rebecca loved it. We showed a clip of Molly on The Single Life and she is hot, hot, hot. And then we have Big Ed. He’s a big personality. He played the piano for me, “Send In the Clowns.” I cannot wait for him on The Single Life. That is going to be very, very interesting because any woman…I just hope she’s watched his season before she goes out on a date with him. She’s got to know who she is dealing with because Big Ed comes with his big personality. And then I interviewed Colt Johnson. We know his dating and relationship history, so I can’t even tell you who’s going to be the perfect person for Colt. What do you want to say to those who haven’t tuned in yet to 90 Day Bares All?

You’ve got to prepare yourselves because this is racy! We don’t have the same rules as regular TV because we’re streaming, and you’re going to see it from the very first episode. If you blush easily, be prepared, because you’re going to hear things and see things you will not see on TV. It makes me blush sometimes.