Earpers, you fought and you got a proper conclusion to your beloved Syfy series.

Wynonna Earp, following the descendant (played by Melanie Scrofano) of Wyatt Earp as she fights the supernatural, will be ending with its current fourth season, the network announced. (This news comes after a nearly two-year hiatus between Seasons 3 and 4, during which fans campaigned passionately for its return.) The remaining six episodes will premiere on Friday, March 5 at 10/9c, with the epic finale set for April 9. Check out a photo from the return above. 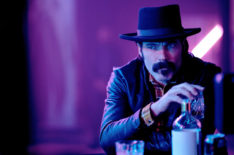 “I’d like to thank our wonderful cast and crew, all of whom were instrumental in bringing Wynonna Earp to our loyal and passionate audience,” creator, executive producer, and showrunner Emily Andras said in a statement.

But Andras also offered a bit of hope: “We couldn’t be prouder of these last six episodes on SYFY, and are thrilled to share them with our beloved fans, who have changed our lives forever. I have been honored to tell Wynonna and her family’s story, and along with Seven24, Cineflix and CTV Sci-Fi, are hopeful we can continue to share their inspiring tales in the future.”

“Every once in a while a show comes along with a powerful message that resonates beyond all expectations with its fans, and for SYFY that show has been Wynonna Earp,” Frances Berwick, Chairman, Entertainment Networks, added. “We are so grateful to Emily Andras and her incredible team who brilliantly brought light to real issues around identity and sexuality throughout the series’ four-season run.” After Wynonna Earp made us cheer for an official WayHaught engagement and ripped our hearts out with Wynonna and Doc’s conversation in the midseason finale, we’re not sure we’re ready for what is sure to be an emotional conclusion to the series.