Prepare to get lost in New Jersey’s mob underworld once more for The Sopranos prequel film The Many Saints of Newark.

Set to premiere on HBO Max and in theaters beginning Friday, September 24, the movie from original series creator David Chase is giving fans a first look at Tony Soprano back in action in a trailer mashup released by the streamer. Celebrating HBO Max’s same-day premieres, the segment offers teases for various big-name films arriving this year. 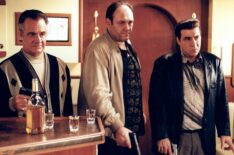 The film was previously slated for a March 2021 release via HBO Max.

As previously announced, HBO Max will debut every Warner Bros. Pictures movie on their platform the same day they release in theaters. Titles will stream for free to subscribers for 31 days following their premieres, and The Many Saints of Newark is just one of many on that list.

Written by Chase and Lawrence Konner, the prequel is set against the backdrop of the Newark riots and sees the rise of rival gangsters who challenge the DiMeo crime family’s hold over the New Jersey city. In the brief clip shown during HBO Max’s trailer mash-up, Michael Gandolfini steps into the role that made his late father James Gandolfini a household name.

Hotheaded as ever, Tony Soprano appears to engage in a street fight before the trailer carries onto previewing other films. No full trailer for The Many Saints of Newark has been released yet, but Chase did tease the film’s official premiere date with a photo of Christopher Moltisanti’s (Michael Imperioli) gravestone (above).

The tease suggests that not all parts of the film will be set in the past, considering Christopher died years after the events of the prequel’s storyline. Below, see a young Tony Soprano on New Jersey’s streets once again and stay tuned for more updates on The Many Saints of Newark in the months to come.

The Many Saints of Newark, Movie Premiere, Friday, September 24, HBO Max and Theaters