‘This Is Us’: Kevin Tries to Live Up to Jack’s Ideals as Madison Goes Into Labor (RECAP)

[Warning: The below contains MAJOR spoilers for Season 5, Episode 7 of This Is Us, “There.”]

It was worth the month wait since This Is Us was last on. The latest episode, “There,” clears up some of the unresolved drama and answers a big cliffhanger.

From Kevin’s (Justin Hartley) mad dash to meet Madison (Caitlin Thompson), who’s in premature labor, to reflecting on Jack’s (Milo Ventimiglia) fatherly influence, we’d say this episode was his. Below, we break down the major highlights, so beware of spoilers ahead. 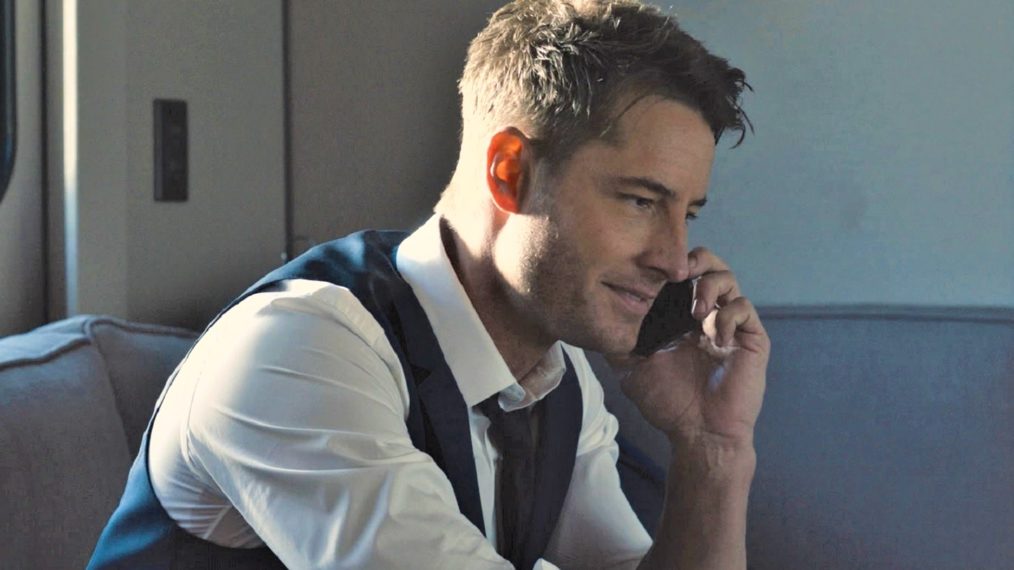 The episode opens with an ominous car wreck with Kevin’s driver’s license in the grass nearby. The tease suggests that Kevin had an accident on his way to reach Madison, but the show rewinds a bit and we see the real story.

Kevin is rehearsing for his movie in the set trailer when he receives a call from Kate (Chrissy Metz), who thanks him for a bouquet he sent to celebrate her and Toby’s (Chris Sullivan) birth mom, Ellie (Annie Funke), going into labor. Wishing his sister luck, Kevin hangs up the phone and heads to set for his first scene with supposed co-star Robert DeNiro. Moments before he makes it to the stage, Madison calls to tell Kevin she’s heading to the hospital with contractions that she believes is real labor and not Braxton Hicks (false labor). Kevin fills in the director on his situation, and Jordan Martin Foster (Stephen Friedrich) offers to work with Kevin before getting him on a plane from Vancouver to Los Angeles. But Kevin walks out, apologizing for the predicament.

Kevin calls Madison to let her know and zooms out of the lot, working his phone. He calls Miguel (Jon Huertas) for assistance, and Kevin’s step-father and mom Rebeca (Mandy Moore) do their best to find him the best possible flight home. Seeing something out of Seattle, Miguel promises to try and get Kevin a ticket for the next plane out. Kevin continues phone jumping and, distracted, has a few close calls on the road.

Next up? A call from Kevin’s agent Brian, who freaks out over his walking off set. But Madison buzzes him again. She tells him she’s at the hospital waiting for a room since her labor pains don’t seem too serious at the moment. Kevin, worried, says she should have a private room. He promises Madison he’s on his way, and answers Randall’s (Sterling K. Brown) call — the one seen in the last episode.

Adding to the growing tension, Foster calls Kevin next, begging him to turn the car around and return to set. Kevin’s had enough, he freaks out at the director and quits. Thankfully, another call from Madison eases Kevin’s nerves once he learns she’s settled in a room and being taken care of at the hospital. Miguel returns Kevin’s previous call, and says he’s secured him a ticket on a plane leaving Seattle in two hours. Believing he can make it in plenty of time, Kevin thanks Miguel, saying he would kiss the man if he could. Plus she gives an update on Season 5's production.

In another call, Rebecca attempts to give her son a pep talk until the poor cell service cuts their connection. Of course, nothing is ever as simple as it seems, and we soon discover what the car accident from the episode’s opening is. Kevin drives up on a scene in which a man careened off the road, the victim (played by Scandal and The West Wing‘s Joshua Malina) is injured, but Kevin does what he can to help before the car’s engulfed in flames.

The lack of cell service makes it impossible to call an ambulance so Kevin helps the man to his car, now planning for a detour on his way to the airport. When Kevin calls Madison, he reaches her voicemail and tells her he has a crazy story, it’s at this point his passenger recognizes him. Kevin tries to keep the man talking, so he shares his woes, worrying that he’s letting his twins down by missing the most important day of their lives, their birth. The man tells Kevin that it isn’t the most important day and that since he’s rich and famous, they’ll idolize him, but that doesn’t matter to Kevin who says what really matters is being there, which his dad Jack was all the time. With moments to spare, Kevin drops the man off at a nearby hospital and dashes to the airport. When he reaches the TSA agent at check-in, Kevin discovers that his ID is missing. He begs the agent to let him pass, but before we see whether he was successful or not, we return to Madison at the hospital. She tells a nurse that she’s scared, and mentions that she doesn’t have anyone to contact since Kate and Kevin are both busy. In the make-you-cry moment of the episode, Randall and Beth (Susan Kelechi Watson) call Madison to offer her any support she may need, even if it’s to stay on the phone and talk, since “they’re family,” as Randall says.

It’s a promising exchange that hints at hope for a near-future reconciliation between Randall and Kevin. Unfortunately we don’t see if Kevin makes it through airport security to board his flight on time. We’ll have to tune in to the next episode.

Father-Son Bonds of the Past Jack’s story involves a championship game with his little league team in which dad Stanley (Peter Onorati) puts serious pressure on him to succeed. Welcoming his son into the car with a 12-pack of beer on the seat, they set off for the field. When Jack returns to his dad on the sidelines following a losing game, the abusive behavior starts, and his father demeans him. Worried about Stanley’s ability to drive after downing all of the beers, he asks if they can delay their trip home. Instead, Stanley pressures Jack to get behind the wheel and drive them home. He manages to get there but not before telling Stanley to shut up on their ride home. The jaunt leads to a reassuring “not bad” from Stanley.

Meanwhile, in the ’80s, Kevin feels pressure to get his football drills down as he and Jack plan to join his coach at an Allegheny quarterback camp. When they arrive at their hotel, Jack and Kevin meet the coach and two Penn State quarterbacks in the lobby. The pride in Jack’s voice and promise that Kevin will deliver on the field the next day leads the boy to get sick in the bathroom once they settle into their room.

Noticing that Kevin is struggling, Jack asks his son what’s wrong, Kevin blames some sloppy joes they ate earlier in the night, but Jack doesn’t believe it. In an attempt to get his son to open up, they make a trip to a nearby bar for some cokes and NY strips with a side of onion rings. Kevin opens up and tells his dad that the coach calls him stupid all the time and he’s worried he’ll disappoint them at the camp. Jack tells Kevin in turn about his own experience with his dad and how he always swore he’d be better than Stanley. Kevin reassures Jack that he is, so when Jack notices Kevin’s coach in the back of the bar, he goes to meet the man in the bathroom. He threatens the man, warning him to never call Kevin stupid again, saying he’ll be watching the coach tomorrow. Intimidated by Jack, the man makes a swift exit and is startled by Kevin’s brief hello. When Jack returns to his son, Kevin asks if he said anything to the coach but Jack brushes it off. They end their night with some playful ball throwing in their hotel room, proving Jack’s promise to be better than Stanley. Can Kevin live up to the standards his own father set? Only time will tell.