Who knew Clarissa Mao (Nadine Nicole) was such a poet?

The ex-socialite (and, in the fallen Earth, ex-prisoner) tells Amos (Wes Chatham) about a little ditty she wrote while she was behind bars: “I have killed, but I’m not a killer. A killer is a monster, and monsters aren’t afraid.” And that, she said, was how she knew she wasn’t a killer or monster—because she’s afraid, all the time.

That poem—recited by firelight—is perhaps emblematic of “Tribes” as a whole: slower-paced but packed to the brim with meaning. While we don’t see every character this episode (and no one’s really in immediate danger), we do get meaningful developments for the two friends on Earth as well as Avasarala (Shoreh Agdashloo) and Drummer (Cara Gee), who’s forced to make a decision that goes against everything she stands for. Here’s how it happens.

A frazzled and unkempt Avasarala mourns her husband, who’s presumed to have been killed in the Free Navy’s attack. But while consumed with heartbreak, she’s also offered a chance for triumph. David Pastor, the new secretary-general and former minister of transportation, wants her to serve in his cabinet. She’s moving up in the world again…just as her world crumbles around her. It’s something of a Monkey’s Paw situation where she’s gotten her position back but (most likely) lost her husband.

Back to His Crew

On the thoroughly postapocalyptic Earth, Amos (Wes Chatham) and Clarissa fight for survival. Amos says they should head back to Baltimore, but they won’t be able to make it in one go. So, marooned in the snowy forest, they need shelter, fast—and “Peaches,” still suffering the side effects of her implant blocker, might not make it if they don’t find somewhere safe.

They wander through the wilderness and eventually, after some guidance from a fellow traveler, find a “crazy guy” with a heated home and food. After a standoff where the guy threatens to kill Amos, Clarissa uses her implant and kills him, and they find his “son” was nothing more than a cardboard cutout in the window. The two are safe, at least for now. But that doesn’t mean they’re okay. Clarissa’s having second thoughts about what they did, and she declares that they’re bad people. Amos doesn’t disagree—he seems to realize he’s lost a fair chunk of his humanity. “I need to get back to my crew,” he says. 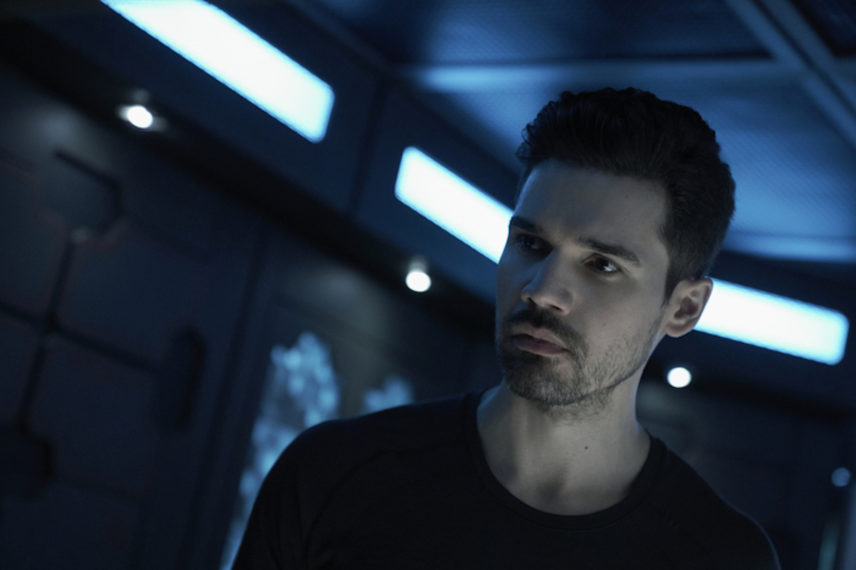 At Tycho, Holden (Steven Strait) and his crew prepare to take off for a second time. They’re caught by surprise when Monica (Anna Hopkins) boards the ship, saying she has a story to write. But that may not be the heart of why she’s there: “There could be more Inaros goons running around on Tycho,” she says, and she’d “rather take her chances” on the Roci. No one can talk her out of it, and the Roci heads out for a hunt. Holden then receives Naomi’s transmission from the first episode—you know, the one where she says, “If something goes wrong…” and then got cut off.

Alex (Cas Anvar) and Bobbie (Frankie Adams) survived! Yay! But a group of Free Navy goons are trying to board the ship and kill them! Boo! Thankfully, Bobbie, in her high-tech Martian suit, and Alex, with explosives, make short work of them. Obviously, Marco (Keon Alexander) is not happy Naomi (Dominque Tipper) managed to get a transmission to the Roci. He wants her spaced, and he asks his son what he would do if he were the leader in that situation. “Spare her life,” Filip (Jasai Chase Owens) responds. This displeases Marco, but he appears to let it go. For the time being.

Filip goes to see Naomi, and his reaction to her tips her off to the fact that Holden is alive. She’s relieved. Her son is surprised—and a little disbelieving—that Naomi was willing to die to kill Marco. “It would’ve been worth it—it’s the only thing left I can do to help you,” she tells him. It’s clear Filip is conflicted, but he continues to side with his dad.

A No-Win Scenario for Drummer

Meanwhile, Drummer boards Marco’s ship, having accepted his invitation. She and Marco trade barbs (“No throne?” she snaps as she enters the bridge), but he makes an offer that leaves her crew awestruck: He says if his plan is followed, the Belt will have the agricultural production of Earth…and surpass it. Drummer’s still not impressed, but Marco says he’ll give them some time to talk it over.

The crew is divided on the issue. Some think joining Marco makes them no better than he is, but others think joining him is worth it just to be protected. Eventually, the decision is made. The only choice left for them is to join him, or die in the war with the Inners. They go through with it and each trade one crew member as “tribute.” As Drummer leaves, she gives Marco a glare that could’ve melted the steel off his ship, and he glares right back. Allies? Sure. Friends? Not even close.

« EPISODE 5
Down and Out
EPISODE 7 »
Oyedeng