Ask Matt: Discovery+ a Minus? Plus: Game Shows, the Great ‘Kat’ Debate & More

Discovering the Reality About the Streaming Boom

Question: I’m really upset about Discovery Plus. Some shows I watch now say for new episodes to go to Discovery+. Does that mean the shows I see on the ID channel will now all be repeats? I resent having to pay for so much streaming when my cable bill is so high. I guess I won’t be watching many Discovery shows anymore! Is anyone else upset about this? — Carol

Matt Roush: Rule of thumb: If you have to ask, you should know you’re probably not alone in your frustration. I’m sure eyes rolled when the new Sex and the City reboot was announced as a property of HBO Max, not HBO linear (if you’re not streaming, you’re out of luck) — and most recently there was pushback from viewers about CBS All Access acquiring Coyote, which was originally produced for Paramount Network on basic cable. It’s the way the industry is moving, and it’s unclear where the tipping point will be, but big brands like Discovery see streaming as the future. This doesn’t mean everything on Discovery, HGTV, TLC, ID, Food Network, etc. is suddenly going beyond a paywall, although some established series and stars are putting new and special content on the site. (The volume of programming is enormous, and it’s beyond me to figure out what all is new and what’s being repurposed and what if anything is actually leaving the linear channels.) I still get plenty of releases about new and returning programs on the traditional networks, but it’s true they’re being somewhat drowned out by hype for the new streaming platform. There will still be plenty of originals on the channels you already watch, but enhanced versions and spinoffs and intriguing new concepts are likely to find their way to Discovery+ in hopes of getting another $5 or $7 a month out of the consumer. As technology continues making the old models harder to sustain economically, this trend is only going to become more pervasive.

Question: I heard you talking about ABC’s The Hustler on Cincinnati’s WLW recently. Craig Ferguson is a little over the top as host, but as far as the game play, I liked it. It’s a fun show. I was wrong guessing the Hustler both times in the first week, LOL. What do you think? – Scott Yee Matt Roush: “Fun” is an appropriate description. I prefer quiz/game shows that average more than 10 questions in an hour, but the real point of The Hustler is to try to figure out who’s the plant in the room who already knows the answers. My bigger problem is that in an hour, there isn’t enough time to get to know the players well enough to make us care who is or isn’t the Hustler, and the two eliminations along the way are never explained. (I’d like at least a moment towards the end to allow the Hustler, whether he or she is successful, to explain their strategy.) Craig Ferguson fits the show’s playful tone, but the only one of ABC’s new Thursday lineup I’m likely to watch regularly is The Chase. More on that below:

Question: I wrote to you a while back about my love of Brooke Burns and why she would be a great host for Jeopardy! I watched the new ABC version of The Chase with a lady named Sara Haines as host. She was OK. She read questions too slow and wasn’t real personable. In other words, she was no Brooke Burns. (To be fair to her, Ken Jennings was no Beast.) Do you have any insight as to why the producers chose their host over Brooke? Why 'The Chase' Will Never Match 'Jeopardy!'

On a different subject, having just read your most recent column and comments on Call Me Kat: I’ve never seen Miranda. Having nothing with which to compare Call Me Kat, I loved every second of it. I laughed so much. This show and Mr. Mayor are the two shows of all the new stuff that have made me laugh like that. If I wasn’t already hoping for an early renewal, I’d be begging for it simply because of the adorable Leslie Jordan! — Mark

Matt Roush: Let’s start with The Chase. I hesitate to say you didn’t approach the host with an open mind because of your fondness for Brooke Burns, but Sara most likely landed the job in part because of her high profile on ABC’s daytime schedule, including The View. I thought she was fine and showed the right amount of humor and encouragement to the contestants in a challenging format that’s so fixed to a ticking clock. (Another of my correspondents wrote to complain about the players answering questions before they were completely read, and given the time pressure, I couldn’t blame them.) 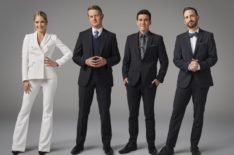 Now on to the new network comedies, Call Me Kat and Mr. Mayor. This is where I point out, as I do every so often, that nothing is more objective than comedy on TV, and for everyone who embraces a show, there are those who deplore it. It’s rare to find consensus. (Studio laughter and laugh tracks, which have been with TV from the start and often accompany TV’s most popular sitcoms, are a special point of contention.) One of the reasons I most enjoy presiding over this forum is to see just how disparate people’s tastes can be. Every comment I got last week regarding Call Me Kat was negative, until last week’s column was published, at which point the defenders came out in force (see below). For me, it’s just OK, a bit too bland, although the supporting cast — including the invaluable Leslie Jordan — is doing its best.

Comment: This is more of a comment than a question regarding Call Me Kat. I tried Miranda when it was first aired and could not watch it. A bit too broad for my taste. I watched the second episode of Kat Thursday night and loved it. The first episode was forced but this seemed more natural, in its own peculiar way. I am a big fan of UK programming but also find room for U.S. shows I like. I guess you can’t dispute taste. — Melinda G Matt Roush: You said it. And it’s always fair to defend one’s taste, even when we choose to agree to disagree.

Question: Is it me, or is Mayim Bialik supposed to look like Miranda Hart in the U.S. version of her show, Miranda? Thanks to you, I watched the first episode of Miranda on Hulu and both have the same hair style. Of course, Mayim is shorter than Miranda, but watching both first episodes (Call Me Kat and Miranda), they had the same story on how they lied to Max (and his U.K. counterpart, Gary) about being married with two children. Of course, Miranda wins, because of who plays Gary (Tom Ellis, currently Lucifer on Netflix). Call Me Kat does have Kyla Pratt, but seeing Tom was great. I do like Call Me Kat better than Mr. Mayor with Ted Danson. I thought the first episode was terrible. After The Good Place, I loved Ted until Mr. Mayor. Any thoughts would be appreciated. — Kathy Matt Roush: One of my other issues with Call Me Kat is how closely it’s aping Miranda in some aspects of style if not tone, almost always to its detriment. As NBC’s The Office learned after its rocky start, this show will likely improve the further it distances itself from the source material and becomes its own entity. As for Mr. Mayor: Again, different strokes and all that. As I noted in my initial review of the new comedies, I don’t find Mayor‘s premise all that exceptional, and the satire leaves much to be desired — getting the mayor high in the second episode was, to put it mildly, uninspired‑but that cast and the writers’ facility with absurd jokes and gags keep me hopeful. It’s early days for these shows, so we’ll see which improve and which don’t.

And here’s the final word for now on the subject:

Comment: “I LOVE Call Me Kat. I laugh through the whole show and Mayim Bialik has a better personality on here than she did on The Big Bang Theory. I also get a kick out of her talking to us! I hope it gets to stay on, as to me it’s not a silly empty filled-with-the-fake-laugh after every sentence.” — Sally

The Waiting Game Is Pure Evil

Question: Just got through reading the TV Insider article about the second season of Evil, and now I’m really, really jonesing for its return. It seems to me that every show I watch has either premiered or has a premiere date but Evil. What’s the holdup with that? What is CBS’s plan here? Are they waiting for more people to discover it on Netflix or maybe the powers that be at CBS just enjoy torturing us? — Justin Matt Roush: The Netflix exposure is just the lifeline Evil needed, and I’m an eager as you to see new episodes. But if this season reminds us of anything, it’s the need for patience as shows struggle to carry on during the COVID-19 crisis, and Evil reportedly got a relatively late start in production in late fall, so I’d expect we may see the second season sometime in the spring. The first season was only 13 episodes, so leaving us wanting more is built into the show’s DNA.

Question: I would like to know why Netflix believes it’s okay to call 10 episodes of a show like Virgin River a “season” when clearly that’s ridiculous?! — Unsigned

Matt Roush: Is it? Get used to it, because it’s the new normal. And is 10 that much less than a 13-episode run, which was Netflix’s average when they began creating original series, and 10-13 is pretty much what you get with most cable series — and even on legacy networks at times. Many creative types have been pushing for some time to reduce the number of episodes per season on certain shows, arguing that a lesser quantity can improve quality, and economically it’s also generally more feasible unless the show is a monster hit. With few exceptions, I’m of the “less is more” camp, especially when it comes to binge-watching, and TV (including Netflix and its algorithms) is all about leaving us hungry for more. But I’d be lying if I didn’t acknowledge that this is an increasingly common complaint. That’s all for now — and because of the approaching holiday weekend, there won’t be another column until late next week. Remember that we can’t do this without your participation, so please keep sending questions and comments about TV to [email protected] or shoot me a line on Twitter (@TVGMMattRoush), and you can also submit questions via the handy form below. (Please include a first name with your question.)