‘Tales From the Hood 3’: Rusty Cundieff on the Horror Flick’s Topical Immorality

Tales From the Hood is back with a third movie this Halloween season on Syfy, and fortunately, we didn’t have to wait another 20-something years since the previous one. (The first was released in 1995, the second in 2018.)

Here, Cundieff takes us inside the new Tales.

From your perspective as an executive producer, writer, and director, what not only resonates about Tales From the Hood, but keeps fans wanting to see more?

Cundieff: I probably would have had a different answer to that very same question a few years back because we’ve always had a pretty good fan base for the film, but I think today, with everything that’s going on in our world, it seems like a lot of what was in the first movie is still sadly very relevant. Police issues, politics, family issues, they’re all still there.

I do think the fact that Tales was so focused on the morality that takes place in the stories, or the immorality, I guess, people seem to like that, [also] the fact that the supernatural [beings] were actually a good thing coming after the humans, who generally were bad. Usually, that is reversed in horror films [where] we’re rooting for the person to get away. In Tales, oftentimes, we’re rooting for the person to get caught.

Set up Tales From the Hood 3. What did you want to showcase in it?

In this story, there are some things that deal with landlord abuse, people who are living in situations where you’re dealing with slumlords, or folks who are trying to push you out for new development but not giving you a good option of where to go. We have that. We always deal with some sort of racial issue. And then we also some stories that are just people behaving badly, that are not maybe as topical as some of the other ones. I don’t want to give too much away, but there’s an interesting twist in our wraparound story this time and how we’re dealing with the devil. Speaking of that wraparound story, let’s talk about the casting: Tony Todd (Candyman), of course, has that amazing presence about him, and newcomer Sage Arrindell is phenomenal, too. Where did you find her?

Yes, she’s just this great little actress our casting person found, and she’s so sweet and wonderful, and she’s really good in the film. I will say that probably directing her in that final scene, because even though we replaced the words she said, was probably the most difficult thing for me, having someone so young and so innocent say some of the things the script required, but her mother was on set with her and we did all the best things we could to make sure everything was OK.

It was 23 years between the first two Tales and now only two years between the second and third. Was the third from completely new material you came up with specifically for it, or additional ideas that were on the backburner?

Surprisingly, it was pretty much completely new material. There were a couple of stories we’ve had for quite some time that we’ve wanted to do, but you have to take so many things into account — accommodation of budget, where you’re shooting, who you can cast. Even though one [tale] was originally going to be in this film, we didn’t feel like we had the right resources to truly pull it off the way it needed to be, so hopefully, we’ll get a chance to do that one a little bit further down the road.

Can you talk about balancing the jump scares with the psychological horror in Tales From the Hood and how you went about doing that for this installment in particular?

Yeah, jump scares are good, but I think we’re always trying to find things that dig a little deeper than just the scare factor. We look at Tales From the Hood less like a horror film and more as you might look at The Twilight Zone. Obviously, we have scares that are in there, and there were some episodes of The Twilight Zone that were a little creepy — [though] never a jump scare, I don’t think. But we definitely look at it more in the old Rod Serling Twilight Zone sort of way or perhaps even Night Gallery, another one of his shows, where what you’re really focusing on more than trying to scare or titillate is how people behave and what the consequences are for that behavior. As one of the innovators of the Black horror subgenre, what are your thoughts on what you’re seeing in recent years? Did that inform any of what you did with this movie?

I think all these new voices that are out there, Black voices and not just Black voices — there’s a lot of voices in film, horror included, that we’re starting to see from — more women, more ethnicities that are coming to the attention of the American audience, when you look at some of the films coming through. First, I’d just like to say that’s wonderful and it’s long overdue.

And then in terms of influencing how we approached Tales From the Hood, I don’t know that it influences it as much as it just makes us happy that there are other things out there. We kind of look at Tales as it is what it is, it has a certain format and a certain style that we try to adhere to most of the time anyway, and so I don’t think we’re very reactionary to what else is out there, for better or worse.

Spine-chilling tales of poltergeists and demons with a creepy mix of buzzy new specials, boldfaced names, and returning favorites.

You tweeted that the DVD version has a few things you had to lose for TV. Can you share any specifics?

It’s just all nastiness. [Laughs] The second tale, the bunker tale, gets a little crazy. I don’t particularly want to say how. Probably, if it were released, it would fall in the rated R territory. And of course, there’s some language that doesn’t come through, but things like that. I would say if you’re watching it on Syfy, you’re still definitely getting the true gist and meaning of the tales, and then if you want to go and check out the Blu-ray or stream it someplace else, you’ll see some of the other naughty things. Any specific plans for a fourth Tales?

Not as of yet. We’re hopeful. If it was up to me and my writing partner, Darin [Scott], we would make them from now until the end of time, but as is often the case, the title is not owned by us, it’s owned by Universal, so hopefully, they’ll want to do some more and this will perform well enough for that to happen. 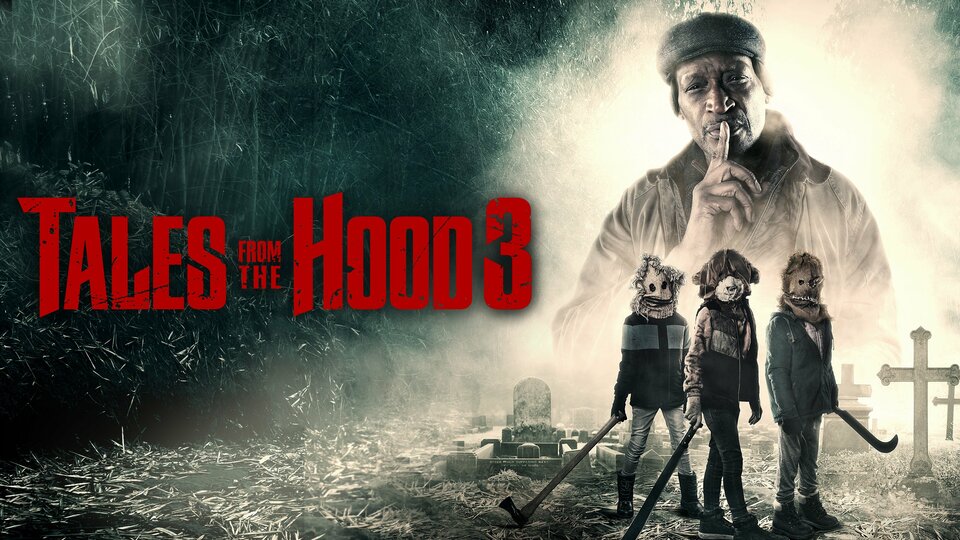 Tales From the Hood 3 where to stream

Tales From the Hood 3