William Shatner spent years as the spokesman for Priceline.com, enthusiastically encouraging us to broaden our vistas and travel the world like mad fools. But he never mentioned the cow penis soup.

They dance in the streets of Hong Kong, commune with elephants in Phuket and cram themselves into one of Tokyo’s insanely small “tube” hotels. Along the way, they get lost a lot, fart a lot, booze a lot. And the nudity factor is off the charts. Bradshaw, in particular, exposes his privates with stunning regularity—sometimes it’s accidental, but most of the time not. Yes, this is one crazy, boisterous program with a message that is loud and hilariously clear: It’s never too late to get your saggy old ass off that couch and live life to the fullest! “Being open to new experiences and ideas is the greatest way to stay young—and that includes trying such delicacies as fried bugs, chicken vagina and mice-infused wine,” says Shatner. “A lot of people travel abroad but look for the safe and familiar: ‘Where’s the nearest McDonald’s?’ ‘Where’s Starbucks?’ But the true thrill comes when you abandon yourself totally and give in to a new culture.”

All good in theory, but this scared the hell out of Winkler. “The concept of spending 35 days with guys I don’t know in countries I don’t know where they speak languages I don’t know just petrified me,” he says. “But now I see it as an opportunity that fell out of the heavens and into my lap. I came back feeling electrified.”

The cast was pulled together boy-band style—Winkler and Shatner knew each other only slightly, and neither had ever met Foreman or Bradshaw—so chemistry was hoped for but by no means guaranteed. And none of the oldsters knew the fifth member of the expedition, 33-year-old comic and MTV host Jeff Dye (NumbNuts), who is clearly on board to lure the younger demo. After all, the peeps at the Peacock don’t want us thinking this series is strictly aimed at the “Hey, you kids, get off my lawn!” crowd.

“At first I was starstruck,” Dye admits, “but then things got very real and very human. I’d been put together with all these incredible father figures, each teaching me the most amazing life lessons. If young people give this show a chance, they will love it a lot.” The boys share a meal and a laugh in Tokyo.

Though the five got along like cheese and crackers most of the time, they did have their disagreements. “Better Late Than Never is like a buddy comedy about four national treasures and a sidekick who are learning to love one another and not always succeeding,” says executive producer Jason Ehrlich (The Bachelor).

Shatner, the self-appointed group curmudgeon, likens the show “to a five-way shotgun marriage, and I took the betrothal very seriously. Some did not.” He claims there were times his fellow travelers would get jokey and disrespectful about certain foreign customs and ceremonies. “That really bothered me,” Shatner says. “I didn’t want us coming off like ugly Americans.”

Winkler is having none of it. “I find Bill lovable and inspiring, but a little prickly,” he says. “The guy has read every book on the planet and wants you to know what is on every page. And he won’t let up. He’s always like, ‘Henry, you must embrace the culture!’ And I’d be like, ‘F–k you, Bill! I am not eating the cow penis!’”

Such expletives did not go over well with Foreman, who is now an ordained minister, or Bradshaw, who, despite his weenie flashing, is the pearl clutcher of the group. Says Winkler: “I’d drop an F-bomb and Terry would start praying, ‘Oh, dear Lord, please come down here and save Winkler!’” There were other comfort-zone issues. “George, who got in the ring with Muhammad Ali, didn’t want to ride a roller coaster,” says Dye. “And Terry seemed to be afraid of everything—heights, animals, food, you name it.” Surprisingly, Winkler was recognized during the trip more for his 1998 Adam Sandler movie, The Waterboy, than for Happy Days. Few in the Far East knew Bradshaw or Foreman. “But everyone knew Shatner,” Dye says. “People were even coming up to him dressed as Star Trek characters. Bill’s relationship with George Takei was pretty toxic, so it gave him weird flashbacks to see Asian people in Starfleet uniforms.”

If the series is a hit, are the guys up for more adventure? “Absolutely!” Winkler says. “Only next time I think we should maybe try Ohio.” Shatner is also on board—on one condition. “We have to bring more diuretics,” he says. “I have no plans to actually watch Better Late Than Never because the trip involved a lot of fatigue and oppressive heat and way too much salt. I mean, who wants to look at yourself when you’re having water retention?” 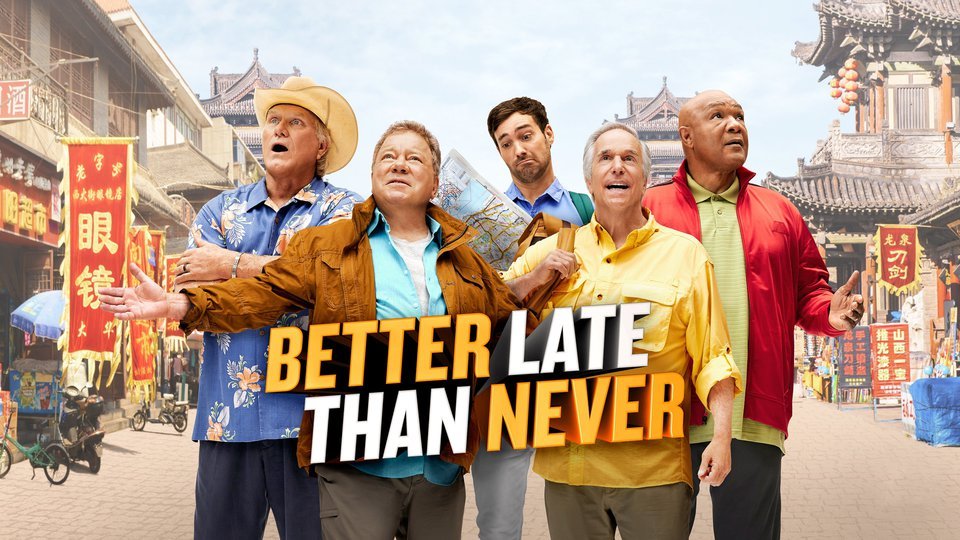 Better Late Than Neverwhere to stream