The Beverly Hilton ballroom didn’t exactly turn into an Oval Office Thursday when ABC took the stage at the TV Critics Association press tour, but presidential matters were all the rage—in a weird coincidence, all taking place on President Obama’s 55th birthday.

First came the introduction of Tom Kirkman, the accidental president who represents 24 star Kiefer Sutherland’s TV comeback in Designated Survivor, airing Wednesdays at 10/9c. Described by its producers as a blend of The West Wing (idealized presidential drama), Homeland (terrorist thriller), House of Cards (political power-play melodrama) and family affair (though no one brought up ABC’s short-lived Commander in Chief), this gripping show is one of the fall’s few seemingly sure-fire prospects, which is probably why ABC chose to start its day with that panel.

RELATED: A Star Wars Series For ABC is Far, Far Away

“Television has a responsibility to confront what’s happening in the world,” says Sutherland of Designated Survivor‘s grounding in political tragedy, when a devastating attack on the U.S. Capitol during the State of the Union address suddenly elevates milquetoast cabinet secretary/family man Kirkman into the most powerful leader of the free world. “We’re looking at [the presidency] from a human point of view,” says Sutherland. “He’s got a very strong sensibility of what he believes is right and wrong.”

Beyond all of the who-blew-up-the-government intrigue, Designated Survivor has a “sort of Frank Capra [Mr. Smith Goes to Washington] aspect,” says executive producer Simon Kinberg. “There is an actually patriotic wish-fulfillment aspect to it in the same way that in The West Wing we had a sort of idealized president, there’s some of that to (Kirkman] as he is on this learning curve. He is an innocent person, uncorrupted, at least at the very beginning of his term.” And while Kirkman is every inch the anti-Jack Bauer, it will be fun to see Sutherland once again try to save the world each week. And possibly revive ABC’s fortunes while he’s at it. 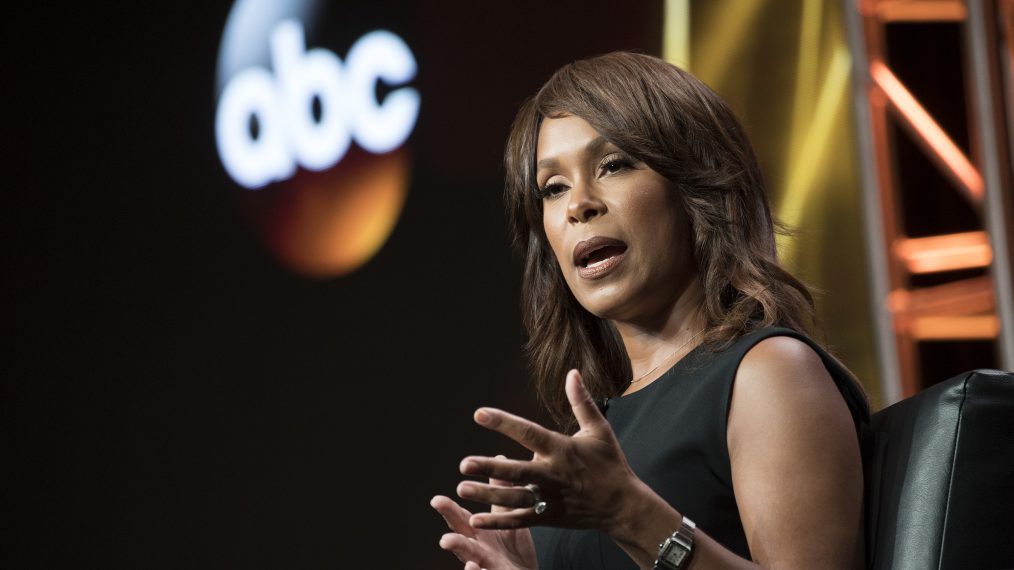 The Designated Survivor panel was followed by the press-tour debut of another new president, currently overseeing ABC Entertainment: Channing Dungey, promoted to the post in February after heading the drama division. She embodies her network’s reputation for diversity (from Shonda Rhimes’ dramas to the Emmy-nominated black-ish) by being the first African-American entertainment president of a broadcast network. Downplaying the significance of her appointment with unaffected poise, Dungey focused on her specific challenges in her first year: strengthening ABC’s position at 10/9c— Designated Survivor should be a key element there—and expanding their brand of family comedy, including a new two-hour block on Tuesdays anchored by the long-running The Middle at 8/7c.

Taking up residence on Wednesdays between The Goldbergs (now at 8/7c) and Modern Family will be ABC’s most distinctive and promising new family sitcom. Speechless displays a similar irreverence and fresh attitude as it introduces another offbeat family, one that rallies around its eldest son: JJ, a teen with special needs. (He’s played by Micah Fowler, who like his character has cerebral palsy and uses a wheelchair, and is possessed of great spirit and humor.) Minnie Driver plays his overbearingly protective mother, Maya, and says the show’s title works two ways: to describe JJ, who uses a keyboard and an aide (Cedric Yarbrough) to communicate, and his ferocious mother, who “renders people speechless with the stuff that she says.” Driver uses her natural British accent to deliver Maya’s impassioned rants because “you can get away with a lot more when you speak with a British accent,” she jokes. “You can say very rude things and make them sound charming. And you can offend people, and they will smile at you, and only subsequently realize how offensive you were.”

Dungey loves that Speechless “does not feel earnest at all. It feels very real.” This is no accident. Show creator Scott Silveri (Friends, The Grinder) grew up with a brother with special needs and has wanted to write on this subject for years. “If you just hear the logline of a show with a kid with a disability, it suggests that AfterSchool Special-ness, and that’s why we were really vigilant about doing everything we could to subvert that,” says Silveri. The show shirks navel-gazing “woe is me” self-pity—”because that’s not what the experience is”—or “inspiri-porn” life lessons. “We never ever want to be manipulative.” And yet there’s powerful comedy to be mined in its unforced and often hilarious realism.

With Designated Survivor and Speechless, Dungey has strong new building blocks for the fall. The rest of the new lineup is a decidedly mixed bag.

A NOT SO DESPERATE HOUSEWIFE: There’s no way not to like Katy Mixon, who four days after exiting her sister gig on Mike & Molly read for and landed the title role of American Housewife (Tuesdays at 8:30/7:30c), which was originally pitched as The Second Fattest Housewife in Westport. And there’s the rub. While Mixon is more than comfortable in her skin—”I’ve never let the media dictate my identity,” she said, instantly charming the TCA audience—the show’s obsession with body image is off-putting, as it situates the attractively zaftig Mixon and her kooky brood (including The Drew Carey Show‘s Diedrich Bader as her still-smitten husband) against an oppressively upscale Stepford town populated by judgmental fitness freaks. The American Housewife panel at the 2016 TCA Summer Press Tour.

“She’s an authentic woman living in an inauthentic world,” Mixon says of her character, also named (though spelled differently) Katie. Sadly, beyond its star, American Housewife is mostly lacking in authenticity, pushing the quirkiness too hard—and sometimes with too familiar results, including a “capitalist pig” son who’s the embodiment of a millennial Alex P. Keaton.

THE VERDICT IS OUT: With Castle now history, its Monday time period (10/9c) will be occupied in the fall by Conviction, which serves Dungey’s desire for “the perfect next iteration of the ABC procedural … featuring a closed-ended case every week.” One of several dramas overly influenced by the Shonda Rhimes template of sexually charged fast-talkers—though one producer likened the banter here to Howard Hawks and Adam’s Rib (fat chance)—Conviction tells the self-contained stories of the Conviction Integrity Unit, which much like a TV production schedule only gets five days to investigate past cases that may deserve to be overturned. (The first one is solved in a hokey “eureka” moment worthy of Perry Mason.) The Conviction panel at the 2016 TCA Summer Press Tour.

The show brings Agent Carter star Hayley Atwell back to ABC in the preposterous role of Hayes Morrison, a scandal-plagued former First Daughter who becomes the team leader, a bad girl reluctantly doing good. Her boss and sparring partner, D.A. Conner Wallace, is played by CSI: NY alum Eddie Cahill, who says of their fractious rapport: “We give each other mental orgasms.” Oh, Shonda Rhimes, what have you wrought?

THE REAL SCANDAL: Should you find yourself wondering where all those high-pitched “TGIT” promos have disappeared to come fall, the culprit is the void that Scandal has left in the 9/8c time period on Thursdays, thanks to Kerry Washington’s pregnancy pushing Season 6 back to the new year. TGIT “has become very closely identified with several of Shonda’s shows, I think Scandal in particular,” says Dungey. “So it did feel that it made the most sense to us to wait to bring ‘TGIT’ back until Scandal comes back in January.” The Nototious panel at the 2016 TCA Summer Press Tour.

In Scandal‘s place (9/8c) is a poor substitute, bluntly titled Notorious, a blatant Shondaland clone starring Covert Affairs‘ Piper Perabo and Rescue Me‘s Daniel Sunjata as hyper-verbal, oversexed professionals—she’s a TV-news producer, he’s a high-powered lawyer to the rich—who shatter every rule of journalistic and legal ethics as they manipulate each other during a celebrity murder case.

The show is based on the real-life exploits of former Larry King Live producer Wendy Walker and lawyer to the stars Mark Geragos, whose clients have included Chris Brown and Scott Peterson of the (yes) notorious wife-murder case which helped inspire the Notorious premise. Explains Walker: “Mark is a master manipulator of the press. Nobody does it better than he does, and he really used me, used our show to get his point across to try to get sympathy for Scott. And of course I looked at it as an opportunity for great ratings … So I used him, and I owned that story because of my relationship with Mark, and he kind of owned my show.”

If this sounds like boasting, it is. If Notorious sounds toxic, it is.

Conviction where to stream