How ‘The Flash’ Is Writing Out Ralph in Season 7 — Plus, Will Sue Return?

Hartley Sawyer, who was fired after his past racist and misogynistic tweets were brought to everyone’s attention, isn’t returning to The Flash for its seventh season but his character, Ralph Dibny/the Elongated Man, will wrap up his story. And apparently there’s an easy way to handle that and the character’s subsequent exit.

As happens in comics, characters “come and go,” which will be the case for Ralph, showrunner Eric Wallace told Entertainment Weekly. First, however, they will “honor the character” during the resolution of one of the Season 6 finale’s cliffhangers: Eva McCulloch/Mirror Mistress (Efrat Dor) killed her husband and pinned it on Sue Dearbon (Natalie Dreyfuss). (Many suspected that Sue would go on to become Ralph’s love interest and eventually his wife, based on their story in the comics.)

As we’ve seen before, Ralph’s ability—to stretch his body—allows him to take the appearance of other people, so there’s already a built-in, in-universe reason for him to look different when they recast the role. Perhaps Ralph too will become wanted in connection to the investigation and be unable to look like himself?

“Without giving any spoilers away, there are a couple of ways that we can have Elongated Man still appear in at least one episode this season to wrap that storyline up,” Wallace teased, adding the way the “recasting” is being done “honors the spirit of the character and provides not only a satisfying conclusion to Sue’s murder mystery, but also it’s done with some humor.” And the showrunner hasn’t ruled out seeing Ralph again in the future. “We just don’t know when he will return, or in what form he will return.”

Dreyfuss will continue to play Sue in Season 7 “on her own, making appearances, and helping Team Flash in an unexpected way,” Wallace said, confirming her name will be cleared (so those appearances won’t take place behind bars). They’ll also “expand her character and give her more backstory and more growth in ways that we hadn’t initially planned” and “help us out with, [specifically] with one of our villains this season that we would have never gotten to had not the circumstances changed,” he added. 'The Flash' Season 7 Trailer: Iris Is Seeing Double, Plus More Trouble for the Team (VIDEO)

Another storyline that has changed is one planned for Ralph and a series regular, “a two hander journey—a season-long [arc] that would have involved a whole bunch of twists and turns that would have played into the season’s big bad,” Wallace revealed, and now that other character “gets to go somewhere that we never imagined they would until many seasons down the line, but we just pulled that up.”

Sawyer was fired in June after screenshots of his since-deleted Twitter account revealed his offensive posts from years past. “In regards to Mr. Sawyer’s post on social media, we do not tolerate derogatory remarks that target any race, ethnicity, national origin, gender, or sexual orientation,” The CW, Warner Bros. TV, Berlanti Productions, and executive producer Eric Wallace said in a statement at the time. “Such remarks are antithetical to our values and policies, which strive and evolve to promote a safe, inclusive and productive environment for our workforce.” 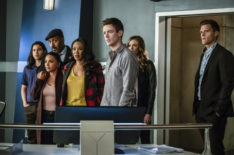 Sawyer, who began appearing on The Flash in 2017, apologized on social media. “My words, irrelevant of being meant with an intent of humor, were hurtful, and unacceptable. I am ashamed I was capable of these really horrible attempts to get attention at that time. I regret them deeply. This was not acceptable behavior,” he wrote. “I am incredibly sorry, ashamed and disappointed in myself for my ignorance back then.”