‘Leverage’ Revival: What We Know So Far About the TNT Drama’s Return

Everyone’s favorite grifter, hitter, hacker, and thief are back for more on IMDb TV.

Four original cast members from the TNT crime drama Leverage (which aired from 2008 to 2012) are reprising their roles in a reimagining of the series, and we can’t wait to see what they steal next.

“Since the day it was cancelled, I’ve longed to return to the world of Leverage. The show, the characters, the cast and the people who made it happen all hold a very special place in my heart,” returning executive producer Dean Devlin said when the series was announced. “Our new series with Amazon Studios and IMDb TV is a re-imagining of the original premise.”

While we wait to find out when we’ll get to see our favorite bad guys who make the best good guys, we’re keeping track of everything we know about the revival.

Beth Riesgraf (thief Parker), Gina Bellman (grifter Sophie Deveraux), Christian Kane (hitter Eliot Spencer), and Aldis Hodge (hacker Alec Hardison) are all back. (Hodge is recurring, while the rest are series regulars.) Timothy Hutton will not be reprising his role as Nate Ford, the mastermind of the team in the original series. 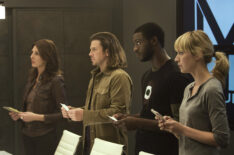 Noah Wyle, who worked with Devlin and Kane on The Librarians, is the new cast member. (He’ll also direct two episodes.) John Rogers (original series co-creator and back as a consulting producer) has described his character as “conflicted.”

Yes, it has (on August 10 in New Orleans), and Devlin and the cast have shared behind-the-scenes photos from the table read and set.

STAY SAFE! Protect others and take care of your gang! 🌈 pic.twitter.com/SbLMQ9MltF

We can’t mask our excitement about making #Leverage2

Ok… Now I believe it… We’re back folks. #leverage Two filming days already in the can. Didn’t wanna jinx anything but I now believe!!! @officialdeandevlin

When will it be released?

A release date has yet to be set, but we’ll keep you updated as we hear more. It’s likely it’ll be some time in 2021.

How will the revival differ from the original?

The series will still see the reformed criminals “using their unique skills to right corporate and governmental injustices inflicted on common citizens.” However, “while Leverage centered on a crusade to avenge the death of a child, this series is propelled forward as a redemption story of misdeeds that need amends,” Devlin has said.

How will you be able to watch the revival?

Is the original series streaming?

The original series is available via IMDb TV (for free, with ads).