Worth Watching: ‘Helter Skelter’ on Epix, the Return of ‘Wynonna Earp,’ Perry Mason in the Courtroom

Helter Skelter (Sunday, 10/9c, Epix): Originally scheduled for June, this exhaustively researched six-part docuseries revisits the murders committed by cult leader Charles Manson’s “family” in 1969. This crime spree, which paralyzed Los Angeles, continues to chill a half-century later, and with testimony from former Manson groupies and journalists, borrowing from a wealth of news footage and recorded interviews, no detail is too small. It’s fascinating to learn (from much-quoted author Jeff Guinn) that Manson used Dale Carnegie techniques to woo wayward youth, most of them girls, into his tribe. But was it necessary to know they all watched the moon landing in awe? Obsessives will appreciate this deep dive, but others may see it as overkill.

The actors tease what to expect after a two-year wait and thank the fandom of Earpers for the Syfy series' fourth season renewal.

Wynonna Earp (Sunday, 10/9c, Syfy): Cult alert! The wild supernatural horror Western returns with the first six episodes of the fourth season. (Filming the remaining six was suspended because of the pandemic.) Our favorite Wild West demon hunter (Melanie Scrofano) has her work cut out for her, seeking a way into the Garden of Eden — located in the demon-filled Ghost River Triangle — to rescue sister Waverly (Dominique Provost-Chalkley) without the help of her mystical gun Peacemaker. From relationship statuses to who's where, catch up before the series finally returns. Perry Mason (Sunday, 9/8c, HBO): Turns out this new twist on the Perry Mason legend isn’t just an origin story, it’s also very much an underdog story. And now that Perry (Matthew Rhys) is taking his first case into the courtroom as a lawyer, it’s immediately and abundantly clear that he’s a far cry from the legal superstar we knew from the original series. Green and seemingly outmatched‑although what a treat to see Justin Kirk as his mentor (and future nemesis?) Hamilton Burger — Perry laments, “If I make a mistake, someone dies.” The stakes are high as the series evolves into the high-stakes legal melodrama many might have expected from the start. Kudos to HBO for giving the show an early season 2 renewal. 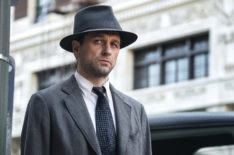 I’ll Be Gone in the Dark (10/9c, HBO): The penultimate episode of the gripping true-crime docuseries is beyond bittersweet in the wake of Michelle McNamara’s tragic and unexpected death. While Paul Holes, chief of forensics in Contra Costa County, continues following leads in the Golden State Killer case, researcher Paul Haynes and crime writer Billy Jensen work to complete Michelle’s manuscript with the cooperation of her grieving husband, comedian Patton Oswalt. The book is an instant hit, but it came at a terrible psychological and physical cost to its author. 'I'll Be Gone in the Dark': What to Know About the Golden State Killer & Michelle McNamara

Before the HBO series premieres, bone up on the details of the decades-old serial killer case and Michelle McNamara’s investigation.

Inside Weekend TV: Filmed over three years, and narrated by the ubiquitous Sir David Attenborough, BBC America’s Wild India (Saturday, 8/7c) celebrates the wildlife of the state of Karnataka in Southern India, a region that is home to a quarter of the nation’s animal population — with more wild tigers and elephants than anywhere else on Earth… The 16th season of Animal Planet’s Pit Bulls and Parolees (Saturday, 9/8c) opens with some very special dogs coming to the attention of New Orleans’ Villalobos Rescue Center, including Sweetcakes, who is returned soon after being adopted… BritBox, the exclusive U.S. streaming home of cult sci-fi comedy Red Dwarf, presents a 90-minute reunion movie Red Dwarf: The Promised Land (streaming on Sunday), which flashes back 3 million years when David Lister (Craig Charles) was put in suspended animation for smuggling a pregnant cat about the titular mining ship. The cat’s litter evolved over these millennia into humanoids who now worship Lister as their god… The battle in the latest episode of National Geographic’s Wicked Tuna: Outer Banks (Sunday, 9/8c) is against Mother Nature, as the fleet faces extreme weather conditions in the form of 20-foot-high swells as they go out for more Bluefin tuna.