From ‘Tusks to Tails,’ Dr. Evan Antin’s New Show Has Animals Down to a Science (VIDEO)

One upside to all the shutdowns over the last few months is that many people are able to spend more time at home with their pets. But how much do we really know about Fido, Whiskers, and their wild kingdom kin? And how come all vets aren’t as hot as Dr. Evan Antin?

Named the Sexiest Veterinarian (twice) by People Magazine and Forbes, the Kansas native — who was clearly created in the same lab as Henry Cavill — is a massive Instagram favorite, as well as a devoted animal-care expert. Antin, a one-time Animal Planet personality, recently partnered with Seeker to create Tusks to Tails, a Facebook Watch series exploring the scientific side of creatures great, small, and fowl that is pretty mind-blowing. 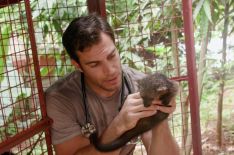 Even experts get goofy around adorable animals.

Along the way, his own pets — including Chihuahua mix Henry — make appearances in various episodes. Because let’s face it, if ya got ’em, flaunt ’em.

We Zoomed the L.A.-based Antin to talk about Tusks to Tails, his love of “underdog” animals, and his upcoming book, World Wild Vet: Encounters in the Animal Kingdom, which is set to drop in October. So grab your four-legged pals and check out our chat above.