‘HTGAWM’ Series Finale: Who Died? Who Went to Prison? Who Killed Annalise? (RECAP)

[Warning: The below contains MAJOR spoilers for the series finale of How to Get Away With Murder, “Stay.”]

Happiness was hard to come by for the characters of the ABC drama over the years, so why should the series finale be any different?

How to Get Away With Murder says goodbye with a finale that answers burning questions, kills characters, and even offers glimmers of joy. And as for the title, well, it’s not a good sign when someone utters the word “stay.”

Here, we break down the major moments of the finale.

It’s not looking good for Annalise (Viola Davis) after both Jorge (Esai Morales) and Governor Birkhead (Laura Innes) testify. Annalise is the one conspiring (against him), he says, and she insists she doesn’t have a relationship of any sort with any of the Castillos.

But after learning the truth about who he is, Frank (Charlie Weber) does a deep dive for information on Hannah and presents a flash drive to Annalise. After, Annalise plays a recording of Hannah telling Xavier she wanted Annalise to go down for her brother, not hurt other people, and the two spoke “intimately” about Birkhead, Annalise notes. On the stand, the governor insists she doesn’t know why. 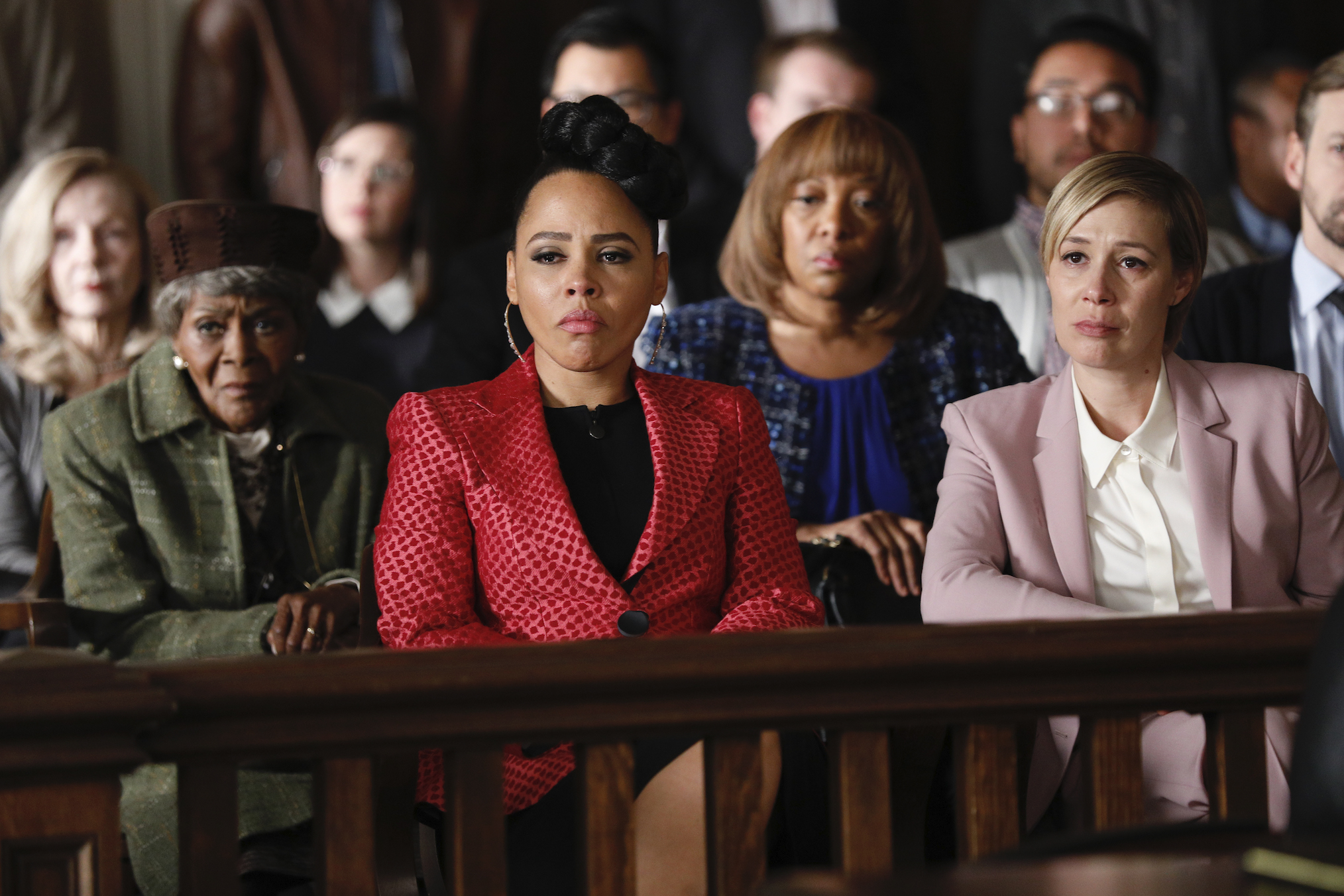 Suspecting the next surprise witness taking the stand against Annalise is Gabriel (Rome Flynn), Frank pays him off (and reminds him his dad wasn’t such a great guy). “Take the money, get away from all this, or Sam’s going to destroy your life like he’s done everyone else,” Frank warns him. And if anyone would know…

Then Nate (Billy Brown) takes the stand and says that Hannah framed him for Sam’s death, using the Castillos and the governor. He also reveals that an FBI agent working for the Castillos killed Asher. “Why?” Annalise asks later. While he hated her for a long time, he realized he was at fault, too. He made the first move at the bar, and now, he’s looking to truly move on.

But before her closing argument, even Annalise wonders if she deserves to lose. “God is the only one who can look at the whole picture and decide who deserves what,” her mother tells her.

With that in mind, Annalise takes off the mask she’s worn “every day of [her] life” in front of the jury. While she’s “done many a bad thing,” she’s being tried for murder — “And I am no murderer. What I am is a survivor,” she continues, detailing what she’s been through. “Am I a bad person? Well, the mask is off, so I’m going to say yes, but am I the mastermind criminal who pulled off a series of violent murders? Hell no.”

“Who I am is a 53-year-old woman from Memphis, Tennessee, named Anna Mae Harkness,” she concludes. “I am ambitious, black, bisexual, angry, sad, strong, sensitive, scared, fierce, talented, exhausted, and I am at your mercy.”

After, Tegan (Amirah Vann) is emboldened to take off her mask, too, and admits she’s in love with Annalise. “I can make you happy,” she says. But Annalise can’t promise the same and instead encourages her to find someone who can. As for the verdict? Annalise is found not guilty.

Who goes to prison?

While Michaela (Aja Naomi King) is more than happy to move on with her life — “I already went to prison,” she tells Connor (Jack Falahee), “It’s called my childhood” — Connor can’t. Oliver (Conrad Ricamora) tries to persuade him to try to get her deal, but he refuses.

“I want to go to prison!” Conrad finally exclaims. He is the one who, earlier, thought one of them should “tell the real truth” to get rid of the “guilt about the lies.” His husband wants him to fight because he still loves him even after what he’s lost for him (his job, his morals), or he wants a divorce. But when Connor finds out that Oliver got him Michaela’s deal in exchange for agreeing to testify against Annalise, he tells him he wants a divorce. “I’ve turned you into a criminal,” Connor says, blaming himself for showing up at Oliver’s door the night of Sam. “That’s the only thing keeping us together: death, murder, and trauma, and that’s going to follow us always, if we stay together.” He even goes so far as to give Oliver what he needs: telling him he doesn’t love him.

But when it comes time for Connor to go serve his sentence, he thanks Oliver. “Now I know how to love,” he says. Is there hope?

Well, there isn’t for Michaela, who tries to reach out to Oliver after Connor’s taken away only to be given the cold shoulder. “It should’ve been you,” he tells her. And when she tries to call Laurel, her friend’s phone has been disconnected.

Who’s shot at the courthouse?

The finale opens up with someone getting shot on the steps of the courthouse, and inside, Ophelia worries it was her daughter. Frank spends most of the hour coming to terms with the truth about himself. “Why would I kill Hannah?” he asks when Annalise checks if he did it. Instead, his focus is on her. “All I want to do now is make you happy,” he says.

But he can’t get a handle of “what’s in [him],” he tells Bonnie (Liza Weil). While it doesn’t need to mean anything for them, “It does to me, and it’s all bad,” he continues. Annalise was right not to tell him, and he wishes Bonnie hadn’t either. “Stay,” she pleads. “I’ll forgive you, I will, just not right now,” he promises before kissing her goodbye.

And after Jorge is stabbed in prison, we find out what happens at the courthouse. Bonnie sees Frank walking up the steps, towards the governor. She tries to stop him, but he shoots Birkhead and is then shot himself. “Stay here with me,” Bonnie begs him. “I had to make it right,” he says, and Annalise joins them as he dies in Bonnie’s arms.

But then Annalise realizes that Bonnie, too, was shot, and it’s her turn to beg someone, to no avail, to “stay.”

After a season of wondering, the answer is no one. She died an old woman. And Eve — whom she called her first love earlier — is the “special speaker who has known Annalise for a long time.”

“I never loved anyone the way I loved Annalise. I loved her even when she didn’t choose me,” Eve admits. “But those moments when she did choose me, I would feel seen. I think we all seek that person in our lives, someone who shows us it’s possible to survive whatever good or bad is thrown at you.”

“That’s not to say Annalise was easy to love, but then when you thought of that young girl from Memphis, you forgave her for everything. I think that’s why so many of us are here today, to remember her, yes, but also to forgive her,” she continues. “For better or worse, we were all chosen by Annalise, and despite the demand she put on us, we know she taught us something,” she finishes. “I know many people find it hard to be around a person like this. It’s easier to choose nice, even if that means settling. But the rest of us know this: when the sun shines on you, you’re a fool to turn away.”

It’s during the funeral that we see how everyone turned out. Nate broke ground on the Lahey Justice Center, “providing opportunities for the incarcerated and their families.” Connor and Oliver are at the funeral, together. Michaela had a successful career.

How is Wes back?

He’s not. Instead, Alfred Enoch plays the grown-up Christopher, with his mother at Annalise’s funeral. While Laurel doesn’t want to speak, she tells Christopher he should. 8 New Couples We Could See in the Next TV Season

The final scene reveals why, after we see Christopher on a bike on the Middleton Law School campus. “Everyone take your seats,” he greets his class. He even briefly envisions Annalise in an empty seat. “It’s your first day of law school, which means we’re already behind,” he continues. “I’m Professor Christopher Castillo. This is Criminal Law 100, or as my mentor liked to call it, ‘How to Get Away With Murder.'”