Ask Matt: ‘Tommy’ and Other Cancellations, ‘I Know This Much’ Is Too Much, ‘Batwoman’ & More

Tommy, We Hardly Knew Ya!

Question: I just read that CBS has pulled the plug on Tommy after a single season, right after watching what I hoped was only the season finale and not the series finale. It did wrap up a lot of the loose threads, so maybe they saw it coming — but I’m still disappointed. I really was starting to like this one. Now I can light all my candles for Stumptown to get renewed. Any word on that one? — Michael

Matt Roush: I’m getting quite a bit of mail, not surprisingly, about Tommy being axed after just one season. (Prompting the go-to joke anytime CBS pulls this sort of trick on a procedural that dares to be a little different: Why didn’t they just call it NCIS: Tommy?) This is discouraging, as many cancellations tend to be this time of year, but I was glad the season ended with actual resolution, an upbeat finish and a smart tease that indicated where the show would have headed if given a chance. As for Stumptown: It’s still in limbo, as far as I’m aware, while we wait to hear from ABC about any of its fall programming plans, which like many have been disrupted by the shutdown of production (including of pilots) during the pandemic. It’s also possible that, if ABC does manage to cobble together a fall schedule like Fox just announced (which included premieres of shows originally planned for this midseason and acquiring a series from an outside source, Spectrum Originals’ L.A.’s Finest), we still may not know for a while the fate of some renewals. (Fox’s announcement had no news about Prodigal Son, for instance, which many expect to be renewed, but not while so little is known about when production can resume.)

Question: Is there any chance that Tommy will be picked up by another network? We really enjoyed the story lines and especially Edie Falco‘s role. We were happy to see that she got her job back in the final episode and look forward to seeing the results of the storylines about the mayor and Tommy’s love interests, among others. — Alan Matt Roush: Variations of this question are asked almost any time a show is canceled prematurely, and most often the answer is: Unlikely. That’s the case here as well, because the network’s own studio produced the show, along with Amblin, and unless Amblin can find another partner or buyer — and this probably isn’t the best time to be making these kinds of deals — it’s probably history. Especially with only one short season under its belt.

Question: Is there anything in the way of a petition to reinstate Tommy on CBS? I think they pulled the plug too early. Thoughts? — Cindy

Matt Roush: Agreed on the “too early” part. There appears to be a petition on change.org on behalf of Tommy, and you might find other fan campaigns through social media. But I’ve often found the most effective tool can be writing a personal letter directly to the network, explaining why the show matters. It may not help, but it can’t hurt, and you’ll get something off your chest. (A procedural with a female lead is still fairly rare, although next season, whenever that may be, CBS is planning new series built around pre-existing characters: The Silence of the Lambs‘ Clarice Starling and a female version of The Equalizer starring Queen Latifah.) Blink and You Missed Them

Question: I am extremely disappointed that two new shows this season have both been canceled. Deputy, on Fox, was about the L.A. Sheriff’s Department. Tommy, on CBS, was about the LAPD. Both were well-written, fast-moving, action-filled but also had very in-depth multilevel story lines and exceptional casts. They had grit, passion, tenderness and intensity. It was a pleasure to finally have some new, exceptional TV to watch. What happened? Not everyone wants to watch hours and hours of fake “reality” shows. We get two new really good shows, and in a blink, they are gone. If this is what I can expect from the networks, then I might as well turn in my remote and go back to reading books. — Debra

Matt Roush: This is the time of year that tests the resolve of many a TV watcher, and yet, when a fresh crop of shows emerges in the fall (or this year, whenever), most will be back to see if there’s something new to pique the interest. (The aforementioned Clarice and Equalizer have potential, I’d think.) I actually expect a bit less churn from last season to next, but there are always going to be painful casualties. Coincidentally, both Deputy and Tommy aired on Thursdays, which is turning out to be a tough night to launch new dramas.

I Know This Is Too Much

Question: Why would HBO or any network broadcast a program as disturbing as I Know This Much Is True at this time? Don’t we have enough upsetting news every day concerning the coronavirus? — Roberta

Matt Roush: I also used the word “disturbing” in my positive review of this limited series — as well as “harrowing” and “heartbreaking,” judging the show on its quality (especially Mark Ruffalo‘s dual performance) more than its timing. And while I get that something this emotionally grueling won’t be to everyone’s taste, especially during a time of global trauma and tragedy, this is based on a very successful novel that’s likely to be of plenty of interest to those looking for some actual dramatic substance instead of pure escapism — which has its own value, to be sure, and we could use more of it. Roush Review: Mark Ruffalo in 'I Know This Much Is True' Is Emmy-Worthy

But to answer the “why” of the timing: HBO is one of several networks which moved previously scheduled shows out of May until later in the year, either for production reasons or to ensure that there would be new material to air in the fourth quarter. HBO could have moved I Know This Much Is True as well — it was originally scheduled to premiere a few weeks earlier — but I’m betting HBO saw the Emmy potential in Ruffalo’s painstaking work and chose to present it now so it could qualify for awards, which he richly deserves. And while I empathize with everyone who wishes only to be entertained and uplifted by TV right now, there should also be room for dramas that move and challenge the audience. (Although the suffering is so extreme in this series at times, I even made a joke about Job in my review.) After all, no one’s forcing you to watch, and there’s plenty of feel-good TV out there.

Question: I understand that Food Network’s Worst Cooks in America is done somewhat tongue-in-cheek. But as in many shows, it’s tiring to see the use of “star” and “celebrity” in titles and even news stories. I clicked on to the 2020 Celebrity Edition and truly said “WHO are these people?” Isn’t it time we used terms like “celebrity” a little more carefully? — Ralph Matt Roush: And maybe think about renaming Dancing with the Stars while we’re at it, right? We are getting to the point where it’s harder to find household names at a time in a culture where people can become “famous” (in their own minds, anyway) simply by appearing on reality TV. I admit I had to look up several names in this year’s Worst Cooks cast. Dave Coulier (Full House) and Robin Givens are fairly high-profile, and Bridget Everett is familiar to me from her comedy and cabaret work, and Brian Posehn may not be a “name,” but he’s a familiar face from sitcoms — including recurring on The Big Bang Theory. But the others, not so much. And it reminds me that I wouldn’t recognize a Real Housewife if she came into my own kitchen.

Question: Doesn’t anyone in Gotham City pay their electric bills? It seems the number of well-lit scenes per episode of Batwoman seems to grow fewer and fewer. Granted, bats find their prey through echolocation, but even in the comic books there were times when Batman, Robin and Batwoman fought villains in broad daylight! What gives? I know there are some filmmakers who like to use darkness. But, in some cases, less is more. Batwoman is one of those cases. — Leo Matt Roush: Second only to loud background music, dark lighting on TV shows is the most frequent complaint in my mailbag, though rarely this specific or cleverly put. While it’s a fact that producers and directors often feel dark cinematography enhances mood and suspense, it’s even more the case that viewers get annoyed when they can’t see or tell what’s going on.

Question: What was the final body count on How to Get Away with Murder? I lost count. — Jeanne

Matt Roush: I stopped counting after the second season, when I realized it wasn’t worth the effort trying to make sense of this nonsense and bailed. (Gotta draw the line somewhere.) But they sure did get away with a lot on this show. 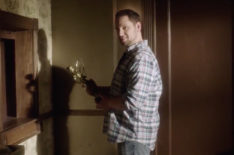 And Finally… A Recommendation!

Question: I’ve become a big fan of the British show Grand Designs on Netflix. It’s like This Old House on steroids and they end up with a finished product in less than an hour. Where else can you see a mid-1800s multistory water tower in downtown London turned into living quarters with an observation room at the top that anyone would die for? Or a 1930s movie theater become a home? And the host is great! — Jim

Matt Roush: In my desire to end these columns on a positive note whenever possible, I’m happy to pass on this recommendation. (As I’ve explained before, it’s impossible to cover or even discover everything on a bottomless service like Netflix, especially when it comes to imported series they don’t tend to promote as heavily as their originals.) This sounds like great fun, and I’ll check it out when I get a breather. Maybe by 2027.