[Warning: The below contains MAJOR spoilers for the Season 2 finale of Manifest, “Icing Conditions.”]

So much happens in the Manifest Season 2 finale that has implications moving forward for the 828ers and everyone in their lives. 8 Burning Questions We Have for 'Manifest' Season 3 (PHOTOS)

Meanwhile, Saanvi (Parveen Kaur) tries to get the cure from the Major (Elizabeth Marvel), only to accidentally kill her — and learn that the Major’s scientists had been working on weaponizing, not curing, the anomaly.

Finally, fishermen discover the tail fin of Flight 828 in the ocean. Yes, the plane that brought the passengers home.

Here, showrunner Jeff Rake teases what’s next if Manifest is renewed for Season 3.

Those men found what looks like part of the plane. Is it actually the plane?

Jeff Rake: That’s going to be the first order of business in Season 3. By the first episode, the entire globe is going to have eyes and ears focused on this tail fin, and that is going to obviously be the investigation because it would be a metaphysical impossibility if this is a part of the same plane. We saw it land. We saw it blow up. How could it also be at the bottom of the ocean? When the scientists, the great minds of the world, come to do their materials testing and discover that this is the identical plane part, that is going to reignite global scrutiny and also global fears of Flight 828 and its passengers. If that’s the same plane part, what does that say about the passengers of 828? If they’re not, in fact, the passengers of 828, who are they? What are they?

All of the fear, the paranoia, the scrutiny moving forward from the pilot episode is going to reignite on acid, and that’s going to make an already very difficult existence for our heroes become all the more impossible.

How will the 828ers deal with that psychologically? On the flip side, the passengers do come out of Season 2 with some seeming good news, and that is with Zeke’s survival. Ben and Michaela prognosticate in the garage, “Follow the Callings, survive the death date.” That’s a very clear and optimistic directive for them to be taking to all of the passengers at the top of Season 3.

The answer’s going to be more complicated than that, and we’re going to learn what that complication is in the middle of this next season, but my point being, there’s a lot of scary stuff happening at the top of Season 3 because of that tail fin, but there’s also things for the passengers to be optimistic about. Their psychology will balance out between the good and the bad.

Did Zeke truly survive his death date or could he be living on borrowed time?

Zeke survived his death date, but let me just point out, no one should be under the optimistic assumption that means he is somehow bulletproof. He’s still flesh and blood, just like everyone else. Any of the passengers’ lives could be taken at any time. … [The passengers’ death date] is going to be closer to four years when we get back. 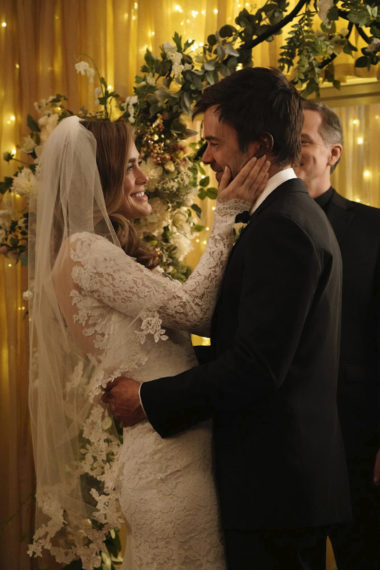 We’re going to learn more mythologically about what it means for Zeke. Does he still have his Callings? What is his day-to-day life look like? What is his mythological significance going forward? All those questions will be answered.

Michaela and Zeke thought they had limited time together. What does his survival mean for them?

We saw them ride off into the sunset together, metaphorically-speaking, and now, there’s the happy news that Zeke has lived. This marriage, therefore, has a chance to actually play out and flourish. There’s an opportunity here for the two to have their happily ever after, but at the same time, Jared is still there.

Did Michaela really fall out of love with Jared? I don’t think anybody thinks that. Did Michaela only marry Zeke because he had a limited time to live? I don’t think anybody thinks that, either. She’s in an impossible emotional dilemma, and now Season 3 is about what this triangle can look like. These are three adults. They love and respect each other. Jared and Zeke made peace with each other. The question moving forward is, can Michaela find a way to love both of these men in different ways? Can these two men be adult enough to maintain a friendship even while they both love the same woman?

Saanvi might have had the toughest season of them all, with descents into almost madness and darkness and her desperation that led to the accidental murder of the Major. How is she going to handle all of that? Is there happiness coming her way?

The plan in the writers’ room is for Saanvi to have a sliver of happiness on the romantic front. It might not be what people expect that to be.

But if there’s 2% of happiness for Saanvi, there’s 98% of angst. There’s a two-pronged journey that’s been triggered by the accidental killing of the Major. The first is very real world. She has committed a terrible crime — whether it’s murder, manslaughter, that’s for the lawyers to decide, but regardless, she’s taken a life — and in Season 3, that criminal investigation begs all sorts of questions. Is Vance going to be willing to try to cover up this crime? Is Vance going to be able to cover up this crime? Are any of the cops that we know and love going to get involved in that and are they going to find out the truth? What are they going to do with the truth when they learn about it? Then there’s the mythological side of the equation. We come out of Season 2 believing, “follow the Callings, survive your death date.” Not that Saanvi defied a Calling in killing the Major, but she certainly was the perpetrator of a heinous act, and if the Callings are in some ways representative of good, the fact that Saanvi starts out Season 3 with such a terrible, heinous crime on her metaphysical list of naughty or nice is an incredible problem for her. The question going forward is, will she ever be able to overcome that? And how is that going to impact her looming death date?

And how will her final conversation with the Major and what happened to Zeke affect her search for a cure?

Saanvi comes into Season 3 armed with that knowledge [that the Major was trying to replicate the anomaly], which means if anyone is going to come up with a cure, it’s back to the drawing board for her, and she’s not going to have any luck by trying to find out what the Major and her scientists were up to.

On the other hand, we now have learned, even though the Major is gone, there are some scientists out there who were working for the Major who apparently were moving forward trying to replicate the anomaly and what is that going to look like? That’s also a looming scientific threat going forward for Saanvi.

Jace, Pete, and Kory’s bodies were never found, so they’re presumably still out there. How worried should Michaela and the rest of the Stone family be about that?

They should be incredibly worried, and as soon as Episode 1 of Season 3, we’re going to see that story come to life. Those characters are incredibly important to our Season 3 mythology. It’s not the first time we’ve seen someone other than the passengers die and come back. We saw it with Zeke, with Griffin, and Jace, Pete, and Kory are the next characters on that same trajectory. Their fate, as it plays out in Season 3, is going to have probably the most significant mythological impact on the rest of the series than anything else to date. Drea and Captain Bowers were on board with Michaela and the Stones’ plan in the finale, and Michaela worked with both throughout the season. But they’re still in the dark. Is that going to continue or might it change? Could either be playing the long game?

I don’t want to spoil either of those. The audience should be keeping an eye on both. I pay a lot of attention to the social media feedback, and I know a lot of people had their suspicions early about Drea, then later in the season about Captain Bowers. I will say that right now, both of them are on the side of good. They are both well-intentioned.

But there’s hopefully many seasons left. As we’ve seen with Jared and others, not everyone who is good stays good. I’m not hinting anything, and I’m not just speaking about Drea and Bowers. Just like in real life, there’s a fine line between heroes and villains. The Stone family had a really tough season. Olive dealt with the others, including Grace, all having the Callings and being on the outside. How is the family going into Season 3?

In Season 3, they’re going to be challenged all over again. The challenge starts differently in Season 3. There’s a two-fold threat against the Stone family, and it ties into some of the other themes. On the one hand, that idea of global paranoia and global scrutiny being triggered because of the tail fin. That makes the entire family have their guards up, just as it does for the rest of the passengers.