The Voice (8/7c, NBC): Joining the roster of pop stars who’ve sat in those spinning chairs: Nick Jonas, whose brothers’ band made a successful comeback last year. He’ll sit alongside multiple champs Blake Shelton and Kelly Clarkson (last season’s team winner) and John Legend to build teams of worthy singers during what is always the most entertaining part of any season (and this is the 18th): the Blind Auditions.

Daly also talks about how he 'genuinely cares' for the contestants and teases what's in store for Season 18.

Better Call Saul (9/8c, AMC): Moving into its regular time period for its fifth and next-to-last season, Better Call Saul positions the rechristened Saul Goodman (Bob Odenkirk) as the life of the courthouse, an irreverent courtroom cut-up who’s king of the lowlifes with 45 clients from his 50%-off promotion. Kim (Rhea Seehorn) is none too pleased, but as Saul notes: “Life’s rich pageant, who are we to judge?” In a more serious subplot, Nacho (Michael Mando) is caught between the Salamanca family drug trade and Gus Fring’s (Giancarlo Esposito) operation, a very dangerous place to find oneself.

The Good Doctor (10/9c, ABC): How will Dr. Shaun (Freddie Highmore) rebound now that Carly (Jasika Nicole) has dumped him, wisely intuiting that his feelings run deeper and more genuinely for Lea (Paige Spara)? Much depends on how Lea responds to his emotional confession. But does any of this explain why Shaun has become obsessed with performing an autopsy on a Jane Doe? 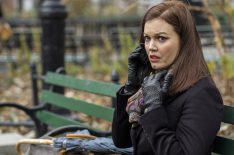 Inside Monday TV: Smithsonian Channel’s Black in Space: Breaking the Color Barrier (8/7c) is an enlightening documentary about NASA’s long struggle to catch up to the civil-rights movement and recruit astronauts of color… To see how it all began on one of my favorite freshman series, Fox’s twisted Prodigal Son (9/8c) repeats its pilot episode, setting up the odd relationship between NYPD profiler Malcolm Bright (Tom Payne) and his notorious serial-killer father, the incarcerated Martin “the Surgeon” Whitly (Michael Sheen)… Mysteries galore on Acorn TV, as the delightful Agatha Raisin concludes its third season of TV-movies with As the Pig Turns, in which Carsely’s Winter Fayre turns into a gruesome crime scene; and the long-running Murdoch Mysteries marks its 200th episode with a fanciful crisis, when Nikola Tesla and Marie Curie vanish from a conference of early 20th-century innovators.