10 Fun Facts About ‘As the World Turns,’ Canceled 10 Years Ago

It ranked as the No. 1 daytime soap for 20 years in a row. It racked up 43 Daytime Emmy Awards. It launched the Hollywood careers of Julianne Moore, Meg Ryan, Marisa Tomei, and Amanda Seyfried. But As the World Turns could not survive the decline of the daytime soap genre, and CBS announced its cancellation 10 years ago, on December 8, 2009, and the show left the airwaves nine months later.

“Can we be surprised?” The Atlantic’s James Parker lamented as the final episodes aired. “The mesmeric hold of the soap, the spell of its simmering close-ups and spiraling plotlines, has been broken. The deaths and births of these made-up communities no longer fill our hearts. Kim Kardashian, Brangelina, the kids from The Hills: these are the people we care about now. Meanwhile every man tweets his own serial narrative, from the line at Starbucks.”

Despite these cultural shifts, however, the show’s legacy lives on, especially in the minds of the millions of viewers who tuned in to CBS on weekday afternoons during As the World Turns’ 54-year run. 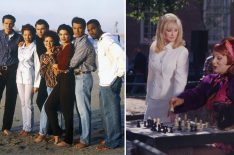 Below, find 10 trivia tidbits about the history-making series.

1. As the World Turns and The Edge of Night, which both premiered on the same day in 1956, were the first two daytime soap operas to be 30 minutes long. Prior to their premieres, serials were 15 minutes in length. Rosemary Prinz (as Penny Hughes), Don Hastings (as Bob Hughes), Helen Wagner (as Nancy Hughes) and Kathryn Hays (as Kim Hughes) on As the World Turns in 1985 (CBS via Getty Images)

4. Wagner died on May 1, 2010, less than two months before her costars filmed the series’ final episode. Don Hastings, as Bob Hughes, spoke the last line of the show—“Good night,”—in her stead. 5. The show expanded to an hour-long format in 1975, the first CBS soap to do so. It took over the half-hour timeslot previously occupied by The Edge of Night, which decamped to ABC.

7. Ten minutes into the November 22, 1963, broadcast of As the World Turns—as the Hughes family discussed their Thanksgiving plans—Walter Cronkite cut in to report the shooting of President John F. Kennedy. The cast, performing the episode live, found out the news after filming had wrapped. 9. Legendary comedy The Carol Burnett Show, another CBS series, featured a recurring sketch parodying As the World Turns, titled “As the Stomach Turns.”

10. In 2006, CBS launched the digital reality competition InTurn, the winners of which would get an As the World Turns acting contract. The victor of Season 2 was future Million Dollar Listing star Ryan Serhant, who appeared in 19 episodes of the soap.