The Truth Is Set Free in ‘Watchmen’ Episode 5 (RECAP)

« EPISODE 4
If You Don't Like My Story, Write Your Own
EPISODE 6 »
This Extraordinary Being

[Warning: The below contains MAJOR spoilers for Watchmen, Episode 5, “Little Fear of Lightning.”]

Damon Lindelof has mastered the art of the single-character focused episode. It’s a skill he first developed in Lost, where the show’s flashback construct allowed each episode to spotlight a specific character’s backstory. He then further perfected this conceit in The Leftovers, with the stunning “Two Boats And A Helicopter” and “Guest,” fable-like episodes told from the perspective of one individual character.

It makes sense then why Lindelof would be attracted to a project like Watchmen. The original comic book was groundbreaking for the way it played with narrative structure, especially how character perspectives would jump around from chapter to chapter. The TV series has given us a taste of this, specifically in the third episode, which introduced Laurie Blake (Jean Smart). Still, even that wasn’t as singularly focused as this week’s episode.

“Little Fear of Lightning” (written by Damon Lindelof & Carly Wray) revolves around the mysterious mirror-masked cop, Wade, aka Looking Glass (Tim Blake Nelson). As someone who has been begging for weeks for more Looking Glass, this origin story might be my favorite episode of the season so far. It shares a similar quality to those incredible Matt Jamison focused episodes of The Leftovers, not just in structure but in tone and theme. The action opens in Hoboken, New Jersey, 1985, where an Oklahoma school bus full of Christian missionaries pulls up outside of a busy funfair. The flickering lights of the fair illuminate the trash-filled sidewalks. Young couples are french-kissing in the street. Leather-clad goths lean against back alley walls smoking cigarettes. Newspaper headlines warn of impending nuclear apocalypse. This is 1980s metropolitan America — and also the night the world will change forever.

Timidly tiptoeing through this “whore’s den” is a young Tulsa man hoping to spread “the truth” and offer sanctuary to the denizens of New Jersey. That young man is Wade, and what happens to him on this godforsaken night will come to define him. Firstly, a pretty goth girl with crucifix earrings lures him into a funhouse and leaves him butt-naked and stranded in the hall of mirrors. At the same time, a giant squid monster lands on New York City, killing millions and sending a psychic shockwave through the neighboring cities and states. Wade wakes up amongst the shards of shattered glass, bloodied, humiliated, and confused. As he exits the funhouse, he’s greeted by a real-life nightmare. The streets are paved with the bodies of the dead and injured — blood streaming from their eyes and ears. “What happened?!” he yells as the camera pans across the Hudson River to a burning New York City, where the tentacled abomination sits atop a crumbling skyscraper. Once again, Lindelof delivers a hell of an opening.

In the 30 plus years since those events, Wade — or Looking Glass as he’s now better known to his colleagues (or “Mirror Guy” if you’re Laurie) — has replaced his Bible with a badge. Like many other Watchmen characters with traumatic pasts, Wade took to law enforcement as his outlet of choice. Where there was once a wide-eyed and stammering, shy, young boy, now stands a hardened and cold-hearted man. Or at least that’s what it might look like on the surface.

The truth is, Wade is just as frightened and bewildered now as he was three decades ago. In his mind, the end of the world is always just a tick of the clock away. He lives in fear of a repeat event and has essentially turned his home into a bomb shelter, rigged with security defenses and stocked with supplies. He attends a bi-weekly therapy group for sufferers of Extra-Dimensional Anxiety. Even his reflective foil mask is a preventive measure in case of another psychic blast.

This fear has become an obsession for Wade at this point. It’s difficult to maintain a healthy life when you’re performing apocalypse drills every night and investigating squid-fall by day. He doesn’t have any friends to speak of. And his paranoia ruined a seven-year-long relationship with the woman he still seems to pine for, Cynthia (Eileen Grubba), who it appears his now remarried, given her change in surname. “For seven years I tried to convince you I wasn’t gonna run off with your clothes and leave you naked,” Cynthia tells him. The worst thing about this, though, is that Wade doesn’t own his fear. Early in the episode, as part of his cover job as a market researcher, Wade secretly watches a focus group for a New York City tourism company. Despite the group’s positive feedback to the commercial, Wade tells the ad execs that they didn’t really like it. “People don’t want to admit they’re scared,” he says. “All your ad does is remind folks that 3 million people suffered a horrific, traumatizing, and inexplicable death.”

Wade is obviously speaking from experience. Of course, he doesn’t want to be anywhere near New York, but he also doesn’t want to admit that he’s scared. At a group therapy meeting, he even claims that he’s no longer afraid — that he’s reached the light at the end of the tunnel. But that is a lie, one that is quickly picked up on by a new woman (Paula Malcomson) that enters the group. “I bet you’re just as bats**t as the rest of us,” she laughs.

She’s right; Wade is still that scared little Christian boy lost in the hall of mirrors. That’s why he so carelessly falls into a familiar trap. Once again, he’s strung along by a pretty woman, and this one turns out to be a member of the Seventh Kavalry. He’s lured into an abandoned department store, where the 7K is attempting to open an extra-dimensional portal. “I brought you here to show you the truth,” the woman tells him.

The truth is a bombshell, but not the nuclear variety. Wade is shoved into a room where he’s greeted by Senator Joe Keene (James Wolk). It turns out Keene has been working from inside the 7K all along. He claims to have taken over the leadership role from Chief Crawford and that his goal is to keep the peace — to prevent the 7K from carrying out another White Night. But to do that, he needs Wade to “serve up” Angela (Regina King) because her cover-up of Crawford’s murderer and her investigation into the 7K is going to cause problems. In exchange for his cooperation, Keene offers Wade the truth that will set him free. “Call it squid pro quo,” he says. That truth comes in the form of a pre-recorded video message from one Adrian Veidt (Jeremy Irons). In the video, recorded in 1985, Veidt addresses future President Robert Redford and confesses to staging the giant squid drop. It was all an elaborate hoax to save the world from nuclear destruction, a trick to unite the U.S. and Russia against a common enemy. Veidt promises to make Redford president and to work together in building a utopia.

It’s nice to see the TV series confirming Veidt’s involvement in the squid disaster — and briefly showing it at the start of the episode. The Zack Snyder movie completely sidestepped the squid, which was a shame, given that it’s a significant part of the comic book (which I’ve been reading alongside the series). Although I will say, the Matrix Reloaded Architect style exposition dump is a little bit disappointing. There are beautiful moments of inspiration in this series (like the entire intro to this episode), but every now and then, there are these scenes where characters just explain things.

Speaking of Veidt, the billionaire playboy turned mad scientist finally succeeds in catapulting himself out of the castle grounds and into… outer space? He lands on the outskirts of some sort of planet, and I assume it’s Mars? Wherever it is, he attracts the attention of an orbiting satellite by constructing an SOS sign out of the frozen body parts of his dead clones. But there is no escape just yet, as he’s dragged back to exile by the Game Warden, who, as I suspected, is yet another clone of Mr. Phillips (Tom Mison). 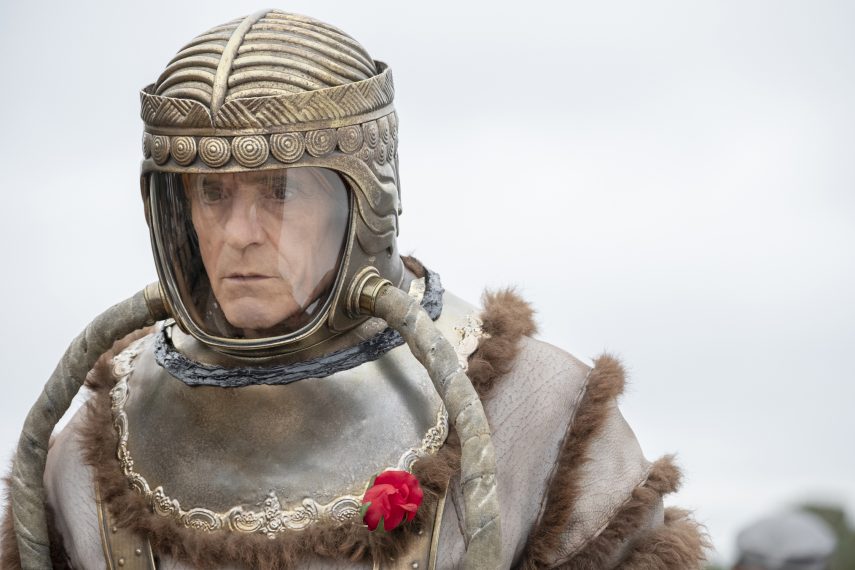 I couldn’t tell you what is going on with this Veidt storyline. I have so many questions. Who is Veidt sending his message to? Did he create the Game Warden? If so, why would he allow himself to get arrested? If this is Mars, then perhaps Dr. Manhattan created the Game Warden. Maybe? The Warden does talk about how “our god abandoned us,” and there is no more god-like figure in the Watchmen universe than mister blue balls himself. It’s fascinating stuff but confusing as hell.

Back on earth, Wade is rocked by the Veidt revelation. “Is anything true?” he wonders. Knowing that Angela’s life is in danger if he doesn’t cooperate with the 7K, Wade sets her up, leading to her arrest for covering up her grandfather’s involvement in Crawford’s murder. But if Wade thinks he’s now free, he is sorely mistaken. The episode ends with a gang of Rorschach masked heavies breaking into Wade’s house, which tells me that he’s yet again fallen into another trap.

-The pills that Angela’s grandfather Will (Louis Gossett Jr.) left in her car turn out to be Nostalgia. According to Wade’s ex, Cynthia, Nostalgia was outlawed “because it turns out, putting memories into pill form leads to psychosis.” Before she’s put in cuffs, Angela swallows the pills. Also, in the comic book, Nostalgia is the name of a Veidt company fragrance.

-Cynthia works at Forever Pet, a company that clones animals so that a person never has to be without their pet. There is a hilariously bleak moment when Cynthia incinerates a dog because it was slightly disproportionate in size.