5 Things We Loved About the ‘Supergirl’-‘Flash’ Crossover

Two heroes are better than one and the fabulous Supergirl was better than ever Monday night when Barry Allen (Grant Gustin) of The CW’s The Flash sped over to CBS for the long-awaited and so-not-disappointing crossover between TV’s sunniest superheroes. It reminded us how much fun television can be and inspired us to list the top reasons why the episode was as out of this world as both the universe-jumping Speedster and the alien Girl of Steel.

Even Star Labs can’t handle the amount of chemistry between Melissa Benoist and Grant Gustin. Forget Batman vs. Superman. In the world’s finest meet-cute (“You’re who now?”), the sparks flew fast and furious and we wanted to bathe in it. Whether they were bantering about the villains of each others’ Earths, explaining Barry’s speed force to Team Kara or bonding over their shared superhero growing pains, the pairing proved fans right: These two were made for a mashup. Too bad Glee missed the chance to capitalize on their immense likability back in the day.

Italia Ricci is so damn good. 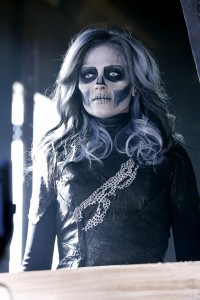 Siobhan went a little heavy on the smoky eye for night.

The Chasing Life star has been a hoot as CatCo’s resident opportunist Siobhan Smythe and we knew she’d be morphing into DC Comics’ Silver Banshee, but nobody prepared us for the fun she’d bring as a baddie. Even with the Halloween Adventure Shop makeover from partner-in-crime Livewire (Britt Morgan), Ricci was able to menace yet make us feel a sliver of sympathy for her woman scorned. We can’t wait to see what she brings to ABC’s straight-to-series political thriller Designated Survivor next fall.

Extra Credit goes to Jeremy Jordan, who put the “win” in Winn with his hilarious geekcrush on Barry. Please let the next crossover bring him and The Flash‘s Cisco together. #Winsco for life!

We need a copy of The Lighthouse Technique.

Admittedly, Cat Grant’s (Calista Flockhart) 1998 guide to finding love may not have been her best work, but the tome urging women to “shine your light and let him come to you…before you know it, he’ll be docked in your port” got her a spot on Oprah. And it got us thinking that an all-Cat flashback episode would be epic. If only so we could see why Bernie Sanders would be inviting her to hot yoga.

The only thing faster than Barry were the inside jokes.

Thank the TV gods for pause buttons. From Cat comparing Barry and Kara’s crew to “the attractive yet non-threatening, racially diverse cast of a CW show” and bestowing The Flash with the very Smallville-esque moniker “The Blur” to Siobhan’s aunt (Harriet Samson Harris) referring to her occult-shop customers as “Muggles,” it was hard to keep up with all the Comic-Con-worthy winks.

VIDEO: Behind the Scenes of The Flash–Supergirl Crossover Coming soon to The CW?

Supergirl deserves to be renewed

Not just because that would mean there could be more crossovers to come, either. Let’s face it, the cast is delightful, its message is empowering and it’s one of the few shows that openly embraces the upbeat, optimistic side of storytelling on TV. Yes, it can be as cheesy as National City rallying around Kara for risking her life for them or as campy as that nod to the craptastic Supergirl movie’s omega hedron in the final scene, but that is the joy of Supergirl: You don’t have to try to be cool when you’re already super.