[WARNING: The following contains MAJOR spoilers for The Walking Dead Season 10 episode 2, “We Are the End of the World.”]

The Walking Dead‘s walker-wearing Whisperers’ leader Alpha (Samantha Morton) is a stone-cold badass. But as we saw in Season 10’s second episode, her steely exterior is beginning to crumble.

The second episode of Season 10 featured an Alpha/Whisperers-centric bottle episode, “We Are the End of the World,” in which viewers saw how Alpha met her right-hand man, Beta (Ryan Hurst), through a series of flashbacks taking place seven years earlier. The moments showed a young Lydia (Havana Blum) and her hood-wearing mama taking shelter for the night in Beta’s place of residence, which revealed plenty about his towering character as well. It was juxtaposed against present-day scenes showing just how much the loss of her now-teenage daughter Lydia (Cassady McClincy) has affected the steely boss.

Morton explains how she slips into playing Alpha and what’s next for the Whisperers.

First off, I love this character and what you’ve done with her. What do you do to get into character?

Samantha Morton: As an actor your responsibility is to ask as many questions as you possibly can from the creative team, and if the character has come from a book, you read the book. You talk to the writers. You talk to the director. You find out what the vision of the director could be and what feel he [or she] may want.

With Alpha, I suppose it is slightly different because it is such an ensemble show and your tone mashes greatly [with others]. There are lots of elements to The Walking Dead. The show has such an incredible history already. Coming in last year in Season 9, it was very important for me, and really for the show, for me to understand what worked. Rather than just saying, ‘Listen, here’s the comic books,’ Angela [Kang], the showrunner was incredibly generous and said, ‘We’d love your interpretation of how you see her.’ And that was amazing. 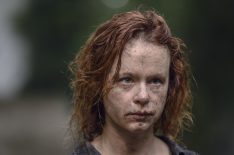 This new character is very protective of the group's leader, Alpha.

I suppose to get into character, you be the character. You develop it as each episode happens, as the story continues. And you fill in the gaps. You ask the writers, whether it’s Angela, or certainly in episode 2, Nicole [Mirante-Matthews, who wrote the episode] what does she see and how does she see it, why does Alpha do what she does and what was she like before, what are her motivations and what drives her to do these deeds. So, there’s all that kind of technical actor-y stuff, but then there’s just organically being on set with Greg Nicotero who was the incredible director of Episode 2. It’s a multitude of layers that go into Alpha. How I work with Ryan, that informs a huge amount about how I do the character, or in Episode 2, how Havana may react to me.

I feel like as soon as I’ve got the clothes on and I’m sitting in makeup as well, I’m kind of there. It’s almost like, ‘There she is!’ I go in as Sam, and I definitely come out as Alpha. This is the first time we’re seeing Alpha’s backstory through her own eyes, and not Lydia’s twisted memories. Were you excited for the world to find out a bit more about her when you were told there would be this Alpha-centric episode?

I think to me it’s more about the Whisperers as opposed to Alpha. I always get the question, ‘How did the Whisperers even become the Whisperers?’ And it’s kind of [like asking], ‘How do people build cults and become cult leaders?’ With Alpha, she is ultimately a cult leader. How is that born, you know? It can’t just be the apocalypse — there’s got to be something else there. So, I was really excited and intrigued and anxious about getting it right.

She now has a lie between her and her followers, who think that Alpha killed Lydia, and Beta knows the truth. Should we be worried that he may use that against her?

I don’t know. I genuinely don’t know. Alpha doesn’t really live in an anxious state of mind. She doesn’t worry about what people think. She’s always proactive. She’s always moving forward in her motivations, whatever that may be. So there’s no time to dwell, really, on that, I believe.

She obviously still loves Lydia, and she clearly has feelings, which seems to go against the Whisperers mantra of ‘We feel nothing, we love nothing.’ Does that make her a phony?

I think without getting too heavy, that when people have mantras, whether people are religious and they say the “Lord’s Prayer” or they’re patriotic and say the “National Anthem,” or they’re in the Cub Scouts and they’ve got Scout’s honor, sometimes within society, we build and we say words that aren’t always necessarily true. We learn to say them, and we say them over and over again and sometimes we really don’t understand the true meaning. I think that Alpha, when [Alpha and Beta] started the Whisperers, this was their way of explaining that they don’t feel in the way that other people feel. ‘We feeling nothing,’ is a reference to, not ‘we don’t feel anything for anybody,’ but [they don’t feel] in the way that they have been told to feel, which is fear. And they’re not afraid. They’re not afraid to die. They’re not afraid to be brave in the way that they see that the future needs to be. I think in relation to loving a child, or her loving her daughter, in the apocalypse, the way that people behave is so radically different because of the threat of imminent death at any point, that the way that Alpha loves her is just incredibly different to how we, as contemporary parents or human beings, would show love. I’m not saying that makes it right. I’m saying that’s just how Alpha’s become. She just shows love differently. I think she’s had to become incredibly strong in order to be a leader. So, in private, she may have a different viewpoint. But in front of her followers, she has to be a leader. Leaders of organizations, of cults, of country, have to say and do all sorts of things in public that they may not believe in private. So, it’s complex.

Definitely. Now, we now know that Beta wears the face of his dead friend — is Alpha’s mask significant to her in any way? Do we find that out eventually?

Fair enough. At the very end of the episode, she’s spotted Carol [Melissa McBride], mirroring the scene we saw at the end of Episode 1, but from Alpha’s point-of-view. Does she recognize Carol, or does her presence just register with Alpha as ‘this is an outsider in my territory’?

I would say, for me, it’s [Alpha] seeing a kindred spirit. There’s something about Carol that Alpha recognizes and feels, like, ‘I could hang with this woman, but at the moment, we’re enemies.’ Another time, another place — you know what I mean? There’s something there!