The West Wing is television at its most precise, most poetic, and — yes — most idealistic.

The legendary drama — which showed the inner-workings of a fictional U.S. presidential administration — is tied with four other series for most Outstanding Drama Emmy wins, but its nine-Emmy first season is still unparalleled.

The show turned 20 years old last month, having debuted on September 22, 1999, and now HBO Max has acquired the streaming rights to the entire series when it launches next year (it currently airs on Netflix). And to celebrate all of this exciting news around the political drama, we’ve assembled this dossier of trivia — factoids that may not be state secrets but should surprise all but the most diehard “Wingnuts.”

2. Martin Sheen informed Empire that his original contract “was for just three years and it was confined to maybe three or four episodes every season,” since the show was originally focused less on Bartlet and more on his underlings.

3. There was a real-life Josiah Bartlett (with two T’s) who signed the Declaration of Independence and later became Governor of New Hampshire. The West Wing’s President Bartlet (with one T), another New Hampshire politician, is purportedly Bartlett’s descendant.

4. Martin Sheen has played the President of the United States two other times, having portrayed John F. Kennedy in the miniseries Kennedy and a fictional POTUS in Medusa’s Child. He has also played Robert F. Kennedy, JFK’s brother, in the TV special The Missiles of October. 5. Janel Maloney auditioned to play C.J. before Allison Janney got the part. So Maloney got the “relatively thankless role” of Donna, as Sorkin told THR. Added Malone: “I was hostessing at an Italian restaurant … and I kept my job at the restaurant at first. But by the third episode, I knew that they were never going to get rid of me.”

6. Meanwhile, future Schitt’s Creek star Eugene Levy was the runner-up to play Toby Ziegler, a part that went to Richard Schiff (The Good Doctor). “Levy was fantastic — strong and sad and very compelling — but you couldn’t take your eyes off Richard,” Sorkin explained to THR. 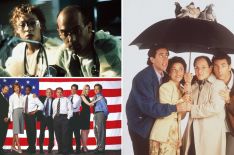 7. Schiff, on the other hand, nearly sank his audition by going off-book. “I had been used to improvising and even in the audition I was feeling free to rearrange Aaron’s words a little bit, as lovely as they were,” he recalled to Empire. “I didn’t find out until after I got the part how furious Aaron was at me for doing that. They said, ‘He was livid. He did everything in his power not to jump down your throat!’ But I came to realize that Aaron was writing in meter and the rhythm of the language is very important.”

8. Toby only smiles 21 times throughout the entire series, per IMDb. 9. The theme song wasn’t always the theme song: Composer W.G. “Snuffy” Walden composed the tune for the end of the third episode. “[West Wing executive producer and director] Tommy Schlamme came over to my studio, because I was playing him cues early on because we had enough time, and he said, ‘That’s it.’ And I said, ‘That’s what?’ And he said, ‘That’s our theme,’” Walden said on the podcast I Think You’re Interesting.

10. “Mandyville”, a TV trope in which characters “simply disappear to limbo,” is named after West Wing character Mandy Hampton (Moira Kelly), who left the narrative without explanation in Season 1.

11. Madeleine Albright once dropped by the set to offer feedback, as writer Kevin Falls told Entertainment Weekly: “She approached the barricades and tried to talk to the director — at the time she was Secretary of State — and said, ‘How come you don’t do more stories about the Secretary of State?’”

12. Sorkin had drama with the other West Wing writers — partly for taking the credit for every episode and partly for a 2000 Emmys acceptance speech in which co-winner Rick Cleveland didn’t get a word in edgewise — according to Slate.

13. C.J. Cregg’s legendary “The Jackal” performance was inspired by Janney and Schiff goofing off on set. “I wandered into [Janney’s trailer] around midnight to find Allison mid-Jackal with Richard sitting off to the side, smoking a cigar and playing an air drum,” Sorkin told Empire. “I just stood there for a second and then said, ‘We’re doing this,’ went back to my office and wrote the opening.” 14. After leaving the show following Season 4, Sorkin realized he couldn’t watch the show. “I can’t tell you whether it was great or not because less than 30 seconds after it started, I dove at the DVD player and slammed it off,” he said in a THR interview. “It was like watching somebody make out with my girlfriend.”

15. Warner Bros. studio tour guides were not allowed to show tourists around the West Wing soundstage because of the accuracy of the set, according to Collider. 17. NCIS co-creator Don Bellisario cast Mark Harmon in the lead role of the CBS procedural after seeing the actor’s Emmy-nominated performance as Agent Simon Donovan on The West Wing. “What I saw was a very controlled presence, a quiet strength,” Bellisario explained to EW. ”That’s what I was looking for.”

18. When West Wing writer Eli Attie was crafting the storyline for presidential candidate Matthew Santos (Jimmy Smits), he called political consultant David Axelrod and said, “Tell me about Barack Obama.” The former President was, at the time, an Illinois state senator running for U.S. Senate, and Axelrod was working for his campaign, according to The New York Times. 19. The show gave actor Kal Penn some unrealistic expectations for his real-life job in the Obama administration. “I was there my first night until 11 p.m. and I was like, ‘Sweet, let’s order Chinese food,’” he told The New York Times. “And everybody was like, ‘You can’t actually order delivery to the White House.’ I was like, ‘But they do it on West Wing!”

20. Riffing on the idea of a West Wing reboot in 2017, Sorkin said he’d cast This Is Us star Sterling K. Brown as the president. The actor’s response? “If you are serious, sir, I would be honored!”