‘The Price Is Right’ Hits 9,000 Episodes — The Game Show by the Numbers

Come on down! TV’s longest-running game show, The Price Is Right — with more than 65,000 contestants and $250 million–plus awarded in cash and prizes since Bob Barker debuted as host in 1972 — airs its 9,000th episode on Thursday, October 10!

Current host Drew Carey celebrates by bestowing a bonus $9,000 on every player who wins a pricing game; anyone who spins $1 on the Big Wheel pockets $9,000 too.

The largest cash prize ever won, during a game of Cliff Hangers.

The cost of the most valuable item ever won: an Audi R8. The perfect Showcase Round bid by Terry Kniess in 2008.

The amount Breaking Bad star Aaron Paul (Price’s most famous contestant, next to Wheel of Fortune‘s Vanna White) overbid on his Showcase in 2000. The age of the oldest winner. (There have been two almost-centenarians!) And the youngest? A 4-year-old betting prodigy. 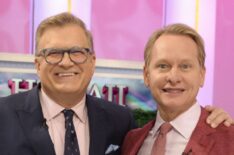 Warehouses needed to store the show’s prizes, including the cars.