When the sitcom returns, the two are on their honeymoon, where Bonnie meets a needy young woman (Kate Micucci) at an AA meeting.

Back home, possibly changing her last name and adapting to living with Adam “will test Bonnie’s personal growth,” says exec producer Gemma Baker. “[She’s spooked at] the idea that this is forever.” 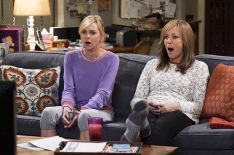 “She’s incredibly demanding and communicates to Christy through yelling,” Baker says. Plus, Christy “discovers that a lot of her coworkers are getting their energy from uppers. She has to compete totally sober and finds her place in a unique way.”