Do the Partners Do Whatever It Takes to Get Samantha Her Job Back on ‘Suits’? (RECAP)

[Warning: The below contains MAJOR spoilers for Season 9, Episode 6 of Suits, “Whatever It Takes.”]

There are some lines people should not cross, and that’s a lesson Harvey (Gabriel Macht) especially has to learn in Wednesday’s episode of Suits.

Following Faye (Denise Crosby) firing Samantha (Katherine Heigl), Harvey, Louis (Rick Hoffman), and Alex (Dulé Hill) declare they’ll do “whatever it takes” to get rid of the special master and get their partner back. And that’s exactly what Faye expects, which is why she calls Donna (Sarah Rafferty) and warns her if they retaliate as she suspects they will — not through the proper channels — the firm won’t survive a year.

Meanwhile, Katrina (Amanda Schull) is surprised to learn that the voicemail Brian (Jake Epstein) left her (and she deleted) was a heads up they’ll be up on opposing sides on a case. But can she handle her conflicted feelings about the case?

Faye Can’t Be Squeaky Clean, Can She?

“Everybody’s got something,” Harvey says, and he becomes even more determined to dig something up on Faye when he learns, from Robert, that Samantha was fired because Faye saw their argument.

He and Louis decide to go to her ex-husband, whom she fired for doing something unethical. George tells them he over-billed bigger clients to pay for his class action suits. When Faye figured it out, she fired him and ratted him out to the ethics board. She then used the threat of losing his license in the divorce to squeeze out every last nickel before she called off the dogs. The divorce settlement seems to confirm his story, but Louis doesn’t trust George since doing something for money doesn’t sound like the Faye they know. But maybe she didn’t care about money once she had it? They need information, so they turn to Gretchen to reach out to her (and Faye’s) old firm. Gretchen agrees, on one condition: Harvey throws Louis a baby shower.

Once Faye hears that Harvey spoke with George, she pays her ex-husband a visit. He admits he left out a few details, but he just wants to see her suffer like he did.

It seems that Louis is right to be suspicious. Faye reveals to Harvey that she stayed at the firm for three more years and didn’t take a salary to make what her husband did right. She didn’t want their daughter to grow up knowing her father is a criminal. If Harvey exposes Faye, he’ll be hurting her daughter. Harvey then tries to leverage Faye to hire Samantha back and resign, but the special master refuses. She crossed a line for her child, but Samantha did what she did to win a case.

When Louis finds out the whole story, he’s hesitant to use emails from Faye asking members of the Bar to drop the investigation into her husband. But when Samantha and Alex’s plan doesn’t work, Harvey still wants to move forward, until a talk with Donna.

She knows he doesn’t want to ruin someone’s family, and he admits he’s feeling guilty because of the role he feels he played in Samantha losing her job. Donna loves Harvey’s sense of loyalty, but if he uses this information, he wouldn’t be the man she wants him to be — or the man he wants to be, either.

When Faye thanks Donna for convincing Harvey to stay quiet, Donna tells her that there are some lines they won’t cross. Dealing With the Devil

Samantha tries to save herself by making a deal with Tom for dirt on Faye. But he wants his favor first: find something on her (former) firm’s client, Gavin Andrews, that isn’t covered by privilege.

The only problem is Gavin has stuff on Samantha that could land her in prison if he realizes she handed him over to the FBI. But it’s worth it to her. “I didn’t have a family, and I’d get placed somewhere and just when I was finally feeling safe, the bottom would drop out and they’d send me away,” she explains to Alex. “I didn’t have a say in anything, and I promised myself, I would never be that powerless again.”

So, Alex helps her come up with a plan, one that involves using someone Gavin would trust even less than Samantha: his niece, who knows about his money laundering. They have Darlene blackmail him, and Alex sends him to Samantha for help. She was just fired, and for the right price, she’d work for him, Alex tells Gavin. 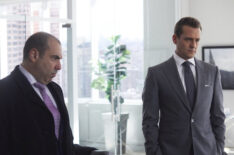 Samantha agrees to make the drop for Gavin (for a price to cover up the crime), and Robert steps in before she can meet with Tom with the proof. He refuses to let Samantha hand anything over without Tom giving her immunity for anything she’s ever done for Gavin. But even though Tom signs, Samantha still comes out losing because he doesn’t have anything on Faye.

At the end of the episode, Harvey apologizes to Samantha for his role in her losing her job, but she understands why he didn’t use what he had on Faye. She wishes she had a parent who watched out for her like Faye did for her daughter.

Samantha reveals she found her biological father. She had wanted Robert to join her in going to see him, but he’s going to visit Rachel and she doesn’t want to go alone. Harvey offers to go with her, and she accepts. Moving on Is Hard

Katrina is surprised to learn that Brian is representing the founder of Curt’s Coffee. Curt believes he’s entitled to a piece of the company he didn’t receive when he was forced out. Brian’s hoping taking this case sends the right message to his new bosses, and she agrees not to throw him off the case.

Upon hearing about the case, Susan offers to help Katrina because she knows it won’t be easy for her. Katrina (reluctantly) agrees, which is a good thing because Susan steps in and helps when Katrina has a migraine in court. Brian does as well, recognizing the symptoms, and she later calls him out on it. He assumed that her conflicted feelings going against him contributed to it.

Thanks to Susan, Katrina has the smoking gun for the case — a personal email in which Curt said he could buy a yacht with the money he got in the awesome deal — but she’s reluctant to use it. Susan knows Brian is why and with any other lawyer, they’d be celebrating the win.

Katrina goes to see Brian to drop the case or they’ll countersue for slander. He admits that Curt regretted leaving — and so does he. She realizes he took the case on his own, and he tells her he missed her and wanted to spend time with her. She reminds him that she wanted them to keep working together as friends, but he couldn’t do it and left. She has to move on, and so does he. He asks if that means they’ll never see each other again, and she sticks to business. Katrina then officially makes Susan her associate and tells her to go home. Not having a life is what got her into trouble with Brian in the first place.