'SpongeBob Squarepants': 5 Questions With Rodger Bumpass, the Voice of Squidward

Nickelodeon’s SpongeBob SquarePants officially premiered on July 17, 1999, and for nearly two decades, it has reigned as the No. 1 animated kids show on TV.

In celebration of SpongeBob turning 20, Nickelodeon is embarking on what it’s calling the “Best Year Ever,” a year of celebration of TV’s most beloved sponge that starts with an all-new special and will lead up to the summer 2020 theatrical release of The SpongeBob Movie: It’s a Wonderful Sponge. The fun kicks off with the July 12 premiere of SpongeBob’s Big Birthday Blowout, an original special that mixes animation with live action and will feature the voice talent behind SpongeBob, Patrick, Mr. Krabs, Sandy, Squidward, and Plankton playing live-action doppelgängers of their animated characters.

When we caught up with Rodger Bumpass, who voices SpongeBob’s cranky coworker and neighbor Squidward Tentacles, he answered our "5 Questions" and revealed that he possesses a treasure trove of memorabilia dedicated to TV's most "absorbent and yellow and porous" character.

Nearly 20 years after he premiered on Nickelodeon, why do you think that audiences continue to be charmed by SpongeBob SquarePants?

Rodger Bumpass: I believe it is the silliness of the world Stephen created. Bikini Bottom, where the citizens walk around, not swim, a world of public transport, campfires, beaches, police, fast food joints and occasional loss of water while underwater makes for a fresh and original canvas. Our writers and animators create characters and gags that both entertain and draw you into that world. In other words, we can relate to the whole package and that is something that keeps the show attractive. Plus, it’s just funny.

Which episodes stand out as your personal favorite?

“Band Geeks” is a fan favorite and mine also. It has the gag of “That’s his eager face,” which I have always loved (see video above). “Dying For Pie” is also my fav; Tom [Kenny, who voices SpongeBob] and I have a nice chemistry when one on one and that show has a lot of back and forth gags.

“Goons on the Moon” is a new one I like because I had the idea for an on-camera cameo as an animator confronted by Squidward in the real world. Plus, the 20th anniversary show where we all get to play live-action versions of our characters was such a hoot to film. 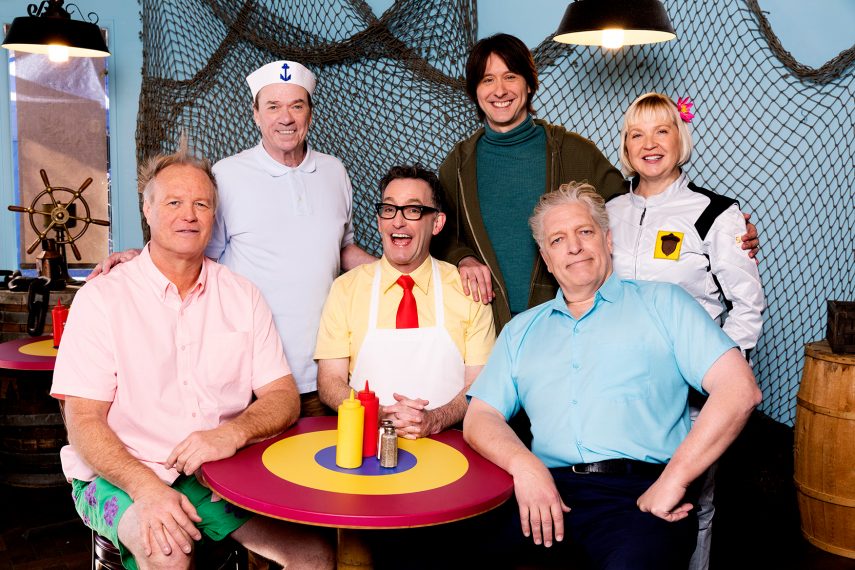 How have SpongeBob Squarepants and Squidward grown and changed in the last two decades?

As with all long-running shows, there is an evolution of story, design, topics and even actor choices. When we first began, Squidward was one note, a nasal monotone grump. Then they discovered that I could scream. After that, they have had me scream nonstop. [Laughs] It is quite therapeutic.

Additionally, as time went on we explored more nuance of our characters and with that shaped, them in more filled out versions. Our characters became more of a picture of us as actors. Instead of Squidward being my alter ego, he became more like me, or vice versa. The point is nowadays I am totally confused.

How did you create the voice of Squidward Tentacles?

When I auditioned, they showed me the breakdown of him and a description. He had this big honking nose and was sarcastic so it seemed right to make him nasal. That quality helped the sarcasm and voilà! Rodger Bumpass in front of "The Museum." (Bonnie Osborne/Nickelodeon)

What is your most prized piece of SpongeBob SquarePants memorabilia?

I began collecting the merchandise early on and proclaim to have the world’s biggest collection. I call it "The Museum." I fully intend to get Guinness [World] Records involved. The very first item was a talking doll. I had never had one of those, and it was such a sense of accomplishment. Then we got versions of classic board games — Sorry, Life, and my favorite, Monopoly. Seeing your character as one of the pewter player pieces is a wonderful thing. And of course, the toilet training set is in a place of honor in "The Museum."