Ready to “unravel the mystery” of the whole universe of The Big Bang Theory?

CBS announced Monday it will air a new special, Unraveling the Mystery: A Big Bang Farewell, following the comedy’s series finale and the Young Sheldon Season 2 finale on Thursday, May 16, at 9:30/8:30c. From a pre-show huddle to tears, the cast prepares to say goodbye.

Johnny Galecki and Kaley Cuoco will take viewers behind the scenes of The Big Bang Theory in this 30-minute special retrospective. They’ll share backstage secrets and personal memories from their 12 seasons working on the series, as well as reveal their favorite moments playing Leonard and Penny and revisit memorable stories from “The Big Bang Theory Stage.”

Unraveling the Mystery: A Big Bang Farewell will also include a tour of the iconic sets, including Leonard and Sheldon’s (Jim Parsons) apartment, and clips and interviews celebrating the series. The Big Bang Theory premiered in 2007 and airs in syndication around the world. After a record-breaking 279 episodes, it ends with a one-hour series finale. It has received 52 Emmy Award nominations, with 10 wins, and seven Golden Globe nominations.

The longest-running multi-camera comedy series in television history has received support from the scientific community. It has a bee species (Euglossa bazinga), a jellyfish species (Bazinga Rieki), and a monkey at the Columbus Zoo (Dr. Sheldon Cooper) named in its honor. 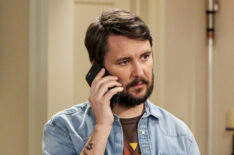 Plus, would he be open to reprising his 'Next Generation' role for 'Star Trek: Discovery'?

A UCLA scholarship was created by and named for the series, The Big Bang Theory Scholarship Endowment, in 2015. It supports undergraduate students who are majoring in the fields of science, technology, engineering, and mathematics (STEM) and in need of financial aid.