Jay Hernandez is well aware what fans of Tom Selleck’s Magnum, P.I. initially thought of CBS’s idea to reboot the iconic action series: “Everybody hated it,” he says. “I was as skeptical, if not more skeptical, than they were.”

But just as Alex O’Loughlin (intrepid Lt. Cdr. Steve McGarrett on Hawaii Five-0) and Lucas Till (the crafty operative on MacGyver) had done before him, Hernandez put his faith in executive producer Peter Lenkov, the mastermind behind all three dramas, and hoped viewers would appreciate how the show honored the original series’ spirit while not trying to copy it. 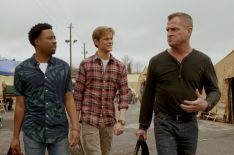 They did: Even before Magnum wrapped its first season in early April, CBS had ordered a second.

Now many fans of the new Magnum would love to see Hernandez in a three-way crossover event with Till and O’Loughlin — a tricky puzzle that Lenkov says he would happily continue to ponder if MacGyver and Hawaii Five-0 score renewals too (the odds look good). MacGyver concludes its third season on May 10, with Peter Weller guest starring as “the bad MacGyver” (a formidable nemesis pitched by Till who would become a big part of Season 4, Lenkov teases).

That same night, H50 welcomes back Joey Lawrence, so his baddie hacker, Aaron Wright, can wreak havoc for the team in the final two episodes of Season 9.

As they await their shows’ fates, the leading men team up for their first joint interview to chat about their heroic roles, Selleck’s short shorts, and why saving the world is easy for their characters, but long-lasting romance … not so much.

The three of you play modern-day action heroes. Why do you think fans are drawn to these shows?

Lucas Till [to O’Loughlin and Hernandez]: Hawaii’s their appeal. I don’t know why people watch Hawaii. [Laughs]

Alex O’Loughlin: No offense to Atlanta [where MacGyver shoots], but when you look at Hawaii [where H50 and Magnum film], that part of the planet is in high definition.

Jay Hernandez: I heard the colder and more horrific the weather is in a town, the more ratings go up for shows like Hawaii Five-0. Till: Yes, they do a surprisingly good job, because half the locations we shoot at are just old [local] warehouses from right after the Civil War. In each episode, we’re in three different countries.

O’Loughlin: Is that the rule of MacGyver?

Till: That’s an average. Sometimes we’re in five countries in an episode. We also have the worst home security of all secret agents of all time. [Laughs] MacGyver’s home has been broken into about seven times, by the same dude three times!

Hernandez: Funny you say that, because Magnum is a Navy SEAL, and I’ve never had my ass kicked more in my life! These guys are trained assassins, and I get my ass kicked all the time.

What makes a reboot successful?

Hernandez: Nostalgia’s a big part of it. It’s built-in audience potential. But to some extent it’s the casting. If the casting’s wrong, it wouldn’t work. Hernandez: The idea of a 2018 version of Tom would’ve killed [Magnum]. You had to do something that’s a little different.

Till: I just thought I was going to shoot the MacGyver pilot, cash a check, and walk away. Then we got picked up for a full season. I’m only half-joking! What are some things you wanted to make sure you kept around from the original show?

O’Loughlin: We have McGarrett’s car [from the original series], the Mercury Marquis, and from the beginning [my character] works on it like it’s his pop’s car.

Hernandez: In the seventh episode, Higgins [Perdita Weeks] presents Magnum with his first aloha Hawaiian shirt. That was a cool, earned moment. With all your characters, romantic relationships don’t seem to last. Is it possible, given their jobs?

Till: Unrequited love, maybe. But it probably wouldn’t be very interesting if we had one girlfriend the whole time.

Hernandez: To be the central guy, you have to be flawed.

O’Loughlin: It’s hard to bring humanity to a flawless dude, so I’m always trying to throw obstacles at McGarrett. Captain America is a dream, so our job is to bring truth to these characters.

Hernandez: And if you’re a flawed guy, you’re never going to be in a relationship too long.

Till: Especially with [the original] Magnum. He was a sex symbol and had a different girl all the time, didn’t he?

Hernandez: It was a different time.

O’Loughlin: Jay’s character would have more women in his life if he just wore those [short] shorts. [All three laugh]

What about with McGarrett?

O’Loughlin: He’s got a dog. But seriously, relationships require reciprocity, and you have to spend time together to generate shared common memory.

I think it would be more realistic to see friends with benefits leaving the house here and there. “Who’s that? Doesn’t matter. Come in.” “Bye! See you on the 17th next month!”