Game of Thrones (Sunday, 9/8c, HBO): The epic dark fantasy enters its eighth and final season with an unprecedented amount of anticipation. Who will ultimately sit on the Iron Throne? Can the united forces — well, not counting evil and selfish Cersei’s (Lena Headey) troops — vanquish the Night King’s Army of the Dead? It’s all building to a massive Battle of Winterfell, but first, some delicious character moments — and some soaring dragon action — as we prepare for the carnage to come. 'Game of Thrones': Where to Catch the First Clip of the New Season Before the Premiere

There's only one show that's offering a sneak peek.

Les Misérables (Sunday, 9/8c, PBS, check local listings at pbs.org): Not into dragons? Maybe the latest treatment of Victor Hugo’s mammoth 19th-century classic will slake your thirst for epic entertainment. Filmed many times and famously musicalized, Les Misérables finally gets the deluxe Masterpiece treatment in writer Andrew Davies’ stirring six-part adaptation. It leans into the misery of its turbulent era with an epic wallow in noble suffering. A robust Dominic West is the embattled Jean Valjean, pursued in his journey of redemption at every step by the irrationally obsessive policeman Javert (David Oyelowo). Lily Collins is heartbreaking as the ill-fated Fantine, whose downfall is hard to watch. Which is the point. That’s why they call it Misérables. 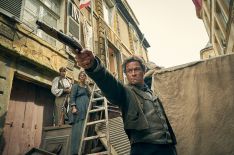 Donen is widely considered to be one of the last of the Golden Age of Hollywood directors.

TCM 25th Anniversary Salute (Sunday, 8/7c, Turner Classic Movies): A quarter-century ago on April 14, the indelible classic-movies channel was launched, and TCM celebrates with a replay of its opening night schedule, starting with the original intro from late TCM host Robert Osborne. He sets up a lineup that includes the 1939 epic Gone With the Wind, followed by another Clark Gable favorite, the 1934 comedy It Happened One Night, a Humphrey Bogart classic The Petrified Forest, and the Val Lewton chiller Cat People in the wee hours.

Inside Weekend TV: Showtime’s sports documentary The Resurgence: DeMarcus Cousins (Saturday, 8/7c) follows the turbulent career of the NBA star through his career-threatening Achilles injury and his decision to sign a one-year deal with the Golden State Warriors… CNN’s medical expert travels the world seeking insights into cultural practices that help maintain a healthy life in the six-part docuseries Chasing Life with Dr. Sanjay Gupta (Saturday, 9/8c). His first stop: Japan… Oscar winner Emma Stone (La La Land) returns to NBC’s Saturday Night Live (Saturday, 11:30/10:30c) for her fourth gig as guest host, joined by South Korean boy band BTS in their first appearance as musical guest… While the hunt continues for Villanelle (Jodie Comer) on BBC America/AMC’s Killing Eve (Sunday, 8/7c), the wounded assassin must depend on the kindness of an exceedingly strange stranger while she heals. You can only imagine how well this will go… Lost episodes from the first five seasons of the comedy classic The Carol Burnett Show will be shown on MeTV starting Sunday at 10:30/9:30c (with episodes airing Monday-Friday at 11/10c). These sketches are for the ages.