It’s hard to believe its been a year since we first met Good Girls‘ Beth (Christina Hendricks), Ruby (Retta) and Annie (Mae Whitman) and witnessed their moms-gone-rogue grocery store robbery.

And with Season 1 condensed into just 10 episodes, there was a lot left to unpack after the finale. In order to prepare for the show’s Season 2 premiere, we’re giving you a refresher on the key details to remember heading into the new episodes. Catch up in the season recap below! Beth, Ruby and Annie are back and badder than ever. In the final episode, Beth, Annie and Ruby orchestrated another robbery of the grocery store where Annie worked in the hopes of removing Rio (Manny Montana) as a threat. Their intent was to reveal Rio’s money laundering at the establishment so that the feds could arrest him and they wouldn’t go down with him. Unfortunately for Beth, Rio’s indictment didn’t stick and when she returned home from an outing, she found Rio holding estranged husband Dean (Matthew Lillard) at gunpoint at their dining room table.

Out of fear, she pleaded with Rio not to kill Dean, but he instructed her that she’ll be doing the killing when he pushes a gun across the table. Will she shoot? We didn’t hear a gun shot as the scene faded to black and the credits rolled, but we’re sure the situation will be addressed in the premiere.

Plus, cast members from 'This Is Us,' 'Good Girls,' and more! In the finale, Ruby dealt with trying to get the funds necessary for her daughter’s kidney transplant. After telling husband Stan (Reno Wilson) — who is also a cop — that she would handle it, she never expected he would piece together her involvement. But after the successful surgery and initial arrest of Rio, Stan approached Ruby and he told her he knows.

She had holes in her alibi about going with Beth to Ohio to collect the money to pay Rio. Stan told her that if it hadn’t been for the grocery store robbery the night before, the police would have never caught Rio, and his words were clearly accusatory. The couple had been one of the brighter aspects of the show, but could that change in Season 2? At least it feels that way for now. 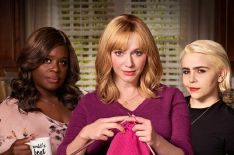 First Look: The 'Good Girls' Are Back in New Season 2 Poster (PHOTO)

Get ready for some more trouble in round two. So Annie was left in a somewhat better position than her sister Beth and friend Ruby, but she is still dealing with a complicated relationship with baby daddy and ex Gregg (Zach Gilford). Of course, there’s also Annie’s grocery store manager, the all-around skeevy Boomer (David Hornsby), who is hell-bent on putting her and her accomplices away. Will she be able to stop him?

Hopefully answers to all of these questions aren’t far off. Until then, you can binge Season 1 on Netflix — if you have time — before Sunday, March 3 when the show returns.