Last week, news broke that former Bull star Eliza Dushku and CBS had reached a $9.5 million settlement. The payment came after after the actress had reported Michael Weatherly for inappropriate behavior on set, only to be written off the show in what she believed to be retaliation.

Now, Dushku is breaking her silence about the New York Times report, offering more of her perspective on how Weatherly acted on set — allegedly making lewd comments and sexually harassing her on multiple occasions — and the situation that has ensued since she reported the behavior. In an op-ed for for The Boston Globe, the actress slams Weatherly and Bull showrunner Glenn Gordon Caron for their recent comments about the settlement, which she says have “amounted to more deflection, denial, and spin.” Michael Weatherly's 'NCIS' Co-Stars Come to His Defense — Is His Job on 'Bull' in Jeopardy?

“This is not a ‘he-said/she-said’ case. Weatherly’s behavior was captured on CBS’s own videotape recordings,” she writes. She adds that Weatherly “had a habit of exaggerated eye-balling and leering” at her.

“What is hardest to share is the way (Weatherly) made me feel for 10 to 12 hours per day for weeks,” Dushku details. “This was classic workplace harassment that became workplace bullying. I was made to feel dread nearly all the time I was in his presence. And this dread continues to come up whenever I think of him and that experience.”

She also claims he bragged about his close friendship with the now-disgraced former CEO of CBS, Les Moonves, who was fired over allegations of sexual misconduct in late 2018. “He regaled me with stories about using Moonves’s plane, how they vacationed together, and what great friends they were,” she says. 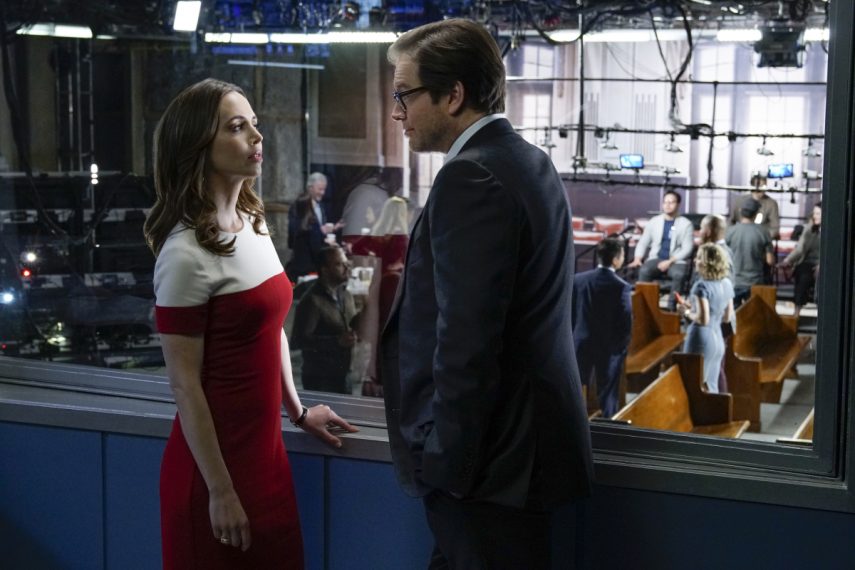 She also says she believes that, after confronting Weatherly about his behavior, he texted CBS TV President David Stapf about getting her written off the show.

“Retaliation is illegal, not to mention unfair and painful,” she writes. “After I addressed it, Weatherly doubled down and ratcheted up his retaliation. Following our conversation and up until the season wrapped weeks later, he barely spoke to me, making it clear he was icing me out.”

Caron was also was allegedly involved in her character’s departure. She continues, “[He] wrote me off the show within 48 hours of my complaints about Weatherly.”

As part of her settlement, Dushku says the network agreed to “designate an individual trained in sexual harassment compliance to monitor Weatherly and the show in general.”

Dushku also wanted a meeting with Steven Spielberg, the head of Amblin Television, which co-produces the legal drama. She says she hasn’t been able to arrange that meeting yet.