‘The Haunting of Hill House’: How the Crain Siblings Represent the 5 Stages of Grief

[Warning: The below contains MAJOR spoilers for Season 1 of The Haunting of Hill House.]

Netflix’s hit series The Haunting of Hill House mixes family drama with some chilling horror for a scary good time. But the series goes beyond that with deep layered storytelling and direction that make it a masterpiece.

The deeper viewers dive into the story of the Crain family, the more new theories and hidden secrets they uncover. And one of the more recent social media theories was actually confirmed by show creator Mike Flanagan himself!

A look at 7 questions weighing on our minds after the Season 1 finale — and everything we know about their answers.

Posting to Tumblr, one fan wrote, “The moment you realize each of the Crain kids represent one of the stages of grief.” That single post sparked a flurry of activity that eventually caught the notice of Flanagan, who responded on Twitter. “Good catch…” he wrote.

For those unfamiliar with the five stages of grief, they are as follows: denial, anger, bargaining, depression, and acceptance. As to who each of those stages applies, think of it as descending order of the Crains, from oldest to youngest: Steven (Michiel Huisman) is denial, Shirley (Elizabeth Reaser) is anger, Theo (Kate Siegel) is bargaining, Luke (Oliver Jackson-Cohen) is depression, and Nell (Victoria Pedretti) is acceptance.

Below, we’re breaking down how each of the stages apply to the Crain siblings with examples from the show. And beware readers — there are tons of spoilers ahead! 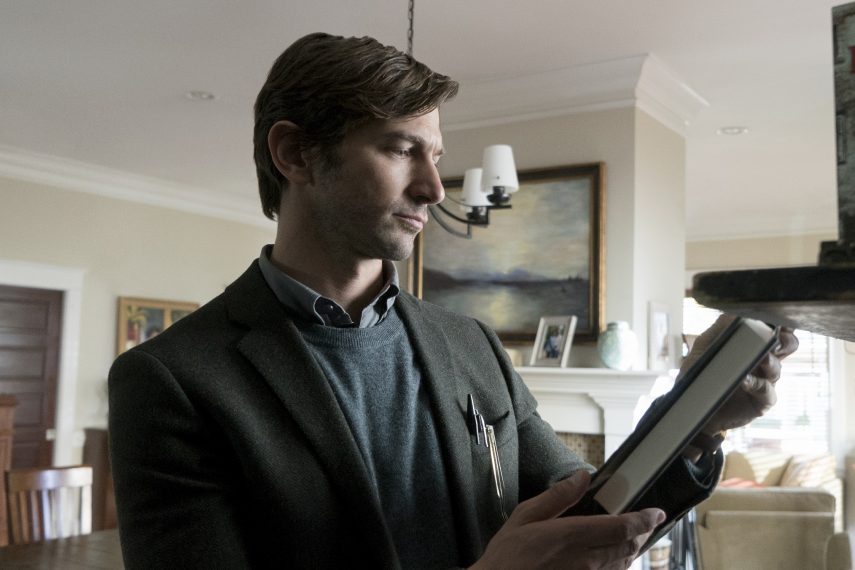 The oldest of the Crain siblings, Steven is a horror “non-fiction” author who doesn’t believe a word he writes. When his siblings or father Hugh (Timothy Hutton/Henry Thomas) claim to see anything or describe unusual occurrences, he’s quick to discredit them. He believes that his mother was mentally ill that his father went insane, but by the season’s end, the truth about what he thinks is flipped on its head.

In the first episode when he sees an apparition of Nell in his apartment, he isn’t willing to accept it, but later, Hugh points out that a clock repairman in Hill House his son claimed to have seen was in fact a ghost. By the final episode, Steven’s forced to stop denying these spirits when they return to the old house, and only then is he finally free.

A recap of where it all went wrong for the Crain family in Episode 6. The second-oldest sibling (and arguably the most Type A) Shirley serves as a stand-in matriarch for the Crains after their mother’s death, but she’s outwardly resentful. Initially, she tries to help Luke with rehab, but he leaves her high-and-dry when he flees the facility. After that, her big brother Steven’s book about the family causes an irreparable tenseness between the two.

We ultimately learn that part of Shirley’s anger stems from the uncertainty of what’s going on around her, as well as her losing control — she likes having a handle on things. She also has pent-up guilt over a one-night stand that took place years ago, which comes bubbling up to the surface when she catches her husband and sister Theo in a compromising position. Though it’s actually not what it looks like, it forces Shirley to wrangle with her true feelings. This, on top of her anger over Nell’s suicide, make for one powerful stage. As the middle child, Theo is clearly controlling who she lets in and who she keeps out of her life — she wears those gloves to stifle any and all feelings… that is, until she wants to feel something. Able to sense emotions and knowledge simply by touching others, Theo tries to rationalize everything around her. When she’s unhappy with something, she makes it so that she is.

Theo does what she wants to do, she even became a psychologist and uses that knowledge to make sense of the things patients tell her, like the girl who tells her about “Mr. Smiley” — a monster who Theo discovers is actually the young girl’s abusive foster father. After Theo touches Nell’s dead body, she can no longer feel anything spurring her to realize she actually yearns for connection. That’s how she ends up drinking to excess and trying to kiss her brother-in-law. The most obvious of the stages is Luke who, along with twin sister Nell, experienced some of the worst things in Hill House. So it’s not surprising that Luke becomes addicted to heroin, using the drug as a coping mechanism. At the time of Nell’s death, he has gone the longest stretch of being clean — 90 days. What better way to knock him back down than to take away his other half?

But even before Nell dies, Luke struggles with his addiction, missing her wedding after Shirley turns him away for being too strung-out. Over and over he’s haunted by the memories of Hill House, the loss of his mother, and now the death of his sister — it’s enough to make anyone sink into a depressed state. By the series end, we learn Luke has learned to manage his depression and drug addiction as he’s two years clean. The youngest of the Crain siblings (by just minutes), Nell is constantly haunted by what she calls “The Bent Neck Lady.” Viewers and Nell eventually learn that this apparition was actually her all along, trying to warn herself about her future death by hanging. And as terrifying as that reality is, by the season’s end, Nell has come to terms with it.

Even after being digested by the house, she says she forgives her siblings for all of their mistakes before allowing the house to take hold of her. She sums it up when she says to Steve, “It wouldn’t have changed anything. I need you to know that.

“Forgiveness is warm. Like a tear on a cheek. Think of that and of me when you stand in the rain. I loved you completely, and you loved me the same,” she adds to her siblings. “That’s all.”