After months of anticipation, The Conners made a bold debut and finally revealed its former Roseanne matriarch’s demise.

It was the question on most viewers’ minds since the original series was canceled following Roseanne Barr‘s controversial tweet about former White House advisor Valerie Jarrett. How would the show explain the former star’s absence? 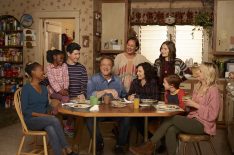 The show opened up with the iconic TV family a few weeks after the passing of Roseanne Conner, who died of an apparent heart attack. Of course, an extra layer of drama was added to the show’s underlying comedy when they revealed she’d actually died of an opioid overdose.

Throughout the episode the family copes with that news in different ways, and so did Roseanne Barr herself, who released a statement with Rabbi Shmuley Boteach about the show’s handling of her exit. Barr and John Goodman in the Roseanne revival.

“While we wish the very best for the cast and production crew of The Conners, all of whom are deeply dedicated to their craft and were Roseanne’s cherished colleagues, we regret that ABC chose to cancel Roseanne by killing off the Roseanne Conner character,” the statement began. “This was a choice the network did not have to make,” she continued calling the decision “grim” among more things in the statement.

In a less formal approach, Barr did share a one liner via Twitter, “I AIN’T DEAD, BITCHES!!!!”

Ultimately, The Conners didn’t have the same kind of ratings as Roseanne had when it returned to TV earlier this year, but they were solid, all things considered. Although down 35 percent from the Roseanne premiere, The Conners earned 4 percent more than the revival’s finale.

With shows like This Is Us and NCIS as competition for Tuesday night ratings, The Conners wasn’t the top-rated show of the evening. Exact numbers will be announced in the coming days, but until then, ABC can work with the spinoff despite the absence of Barr, as the TV family continues to tell relevant and timely stories.

Meanwhile, there’s been plenty of fan response towards the new series. Below, find out what some people are saying about the spinoff after the premiere, including remarks about the topic of opioid addiction.

I laughed. I cried. I’m so Aunt Jackie in the kitchen. Loved the end of the episode tied into the original beginning. So well done! Congrats! #TheConners @ReelMFishman @THEsaragilbert

As the son of an #opioid addict, I need to thank @TheConnersABC for that beautiful, moving look at #addiction in America. So grateful for writing like that. For humanizing people like my dad, who struggle every day. Thank you, thank you, thank you. @THEsaragilbert #TheConners

#TheConners Late to the party but I thought @TheConnersABC did an excellent job with this premiere. Blending death, drug addiction and normal family problems post loss is hard to do. They did it brilliantly….

So what did you think about The Conners premiere? Let us know in the poll below.