‘Fear The Walking Dead’: Morgan Has Things To Make Up For (RECAP)

There’s something about trapping its protagonists on roofs that the Walking Dead franchise seems to find irresistible.

Evoking echoes of the primary show’s first season, this week’s episode of Fear The Walking Dead kept one of its core groups in the overrun hospital as they desperately search for a way down, and the other trying to find a way to reach each other across a floodwater-formed lake.

On the roof, the group’s not feeling very optimistic. Jim’s none too pleased with Morgan (or anyone else), no one can reach Al and despite June’s best attempts to convince him to come back to the group, a regretful Mo-Mo insists he doesn’t have a plan. John and Strand have switched outlooks; now John’s not too sure about Alicia and Charlie’s ability to rescue them, and Strand’s helping him keep faith. He uses Charlie and Alicia’s friendship as an example, saying that if they’ve started working together after everything Charlie took from her, anything is possible. Things might get worse before they get better. Martha, who heard their conversation over the radio, traces a map and gets ready to go somewhere.

Jim stands on the ledge of the roof, seemingly ready to fling himself into the walkers below. When Morgan tries to stop him, he reveals his true intentions — he needs to relieve himself, and he says “pissin’ on em’s the only F-U I’ve got.” Unsurprisingly, he refuses to help Team Morgan rescue Al. Sarah doesn’t attempt to change his mind, but she does want his beer recipe. Increasingly hostile, Jim orders Sarah to leave him alone.

Alicia and Charlie are successful in finding a canoe…and less successful in retrieving it. Martha shows up and starts shooting at them. When Alicia sees she’s hurt, she offers the worst possible thing: help. “I don’t need help!” the former English teacher shouts. “I’m not weak!” (She is weak, because she collapses before making it to the pair.) Morgan, Luciana, June, Wendell and Sarah take the elevator back down to the hospital. The walkers, thankfully, have been trapped by the ceiling collapsing in one hallway. They continue their mission, finding recently-stabbed walkers and concluding Al’s been busy. She’s not in the generator room, but did leave the group a message: she tells them she’s heading for the freight elevator. Wendell notices that the generator’s running out of fuel.

John’s still feeling mopey, but his mood improves as Alicia and Charlie drive through the water in Al’s tank. They all share a brief reunion, then Strand asks who their fellow passenger is: it’s Martha.

I don’t get it. Alicia and Charlie know what Martha did. What point do they see in keeping her alive? And not only keeping her alive, but taking her with them? As much as I hate to say it, Team Alicia may have crossed a logistical line here. 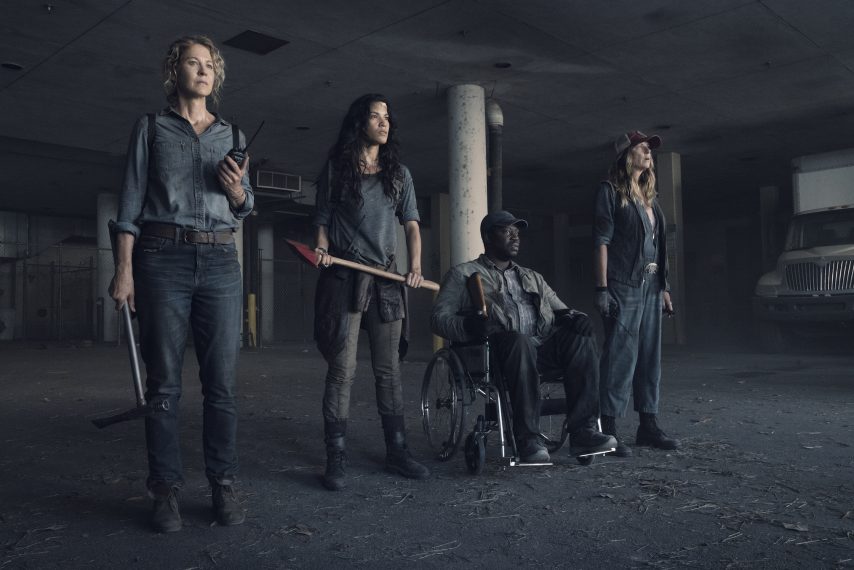 Team Morgan might continue its search for Al without its titular member. Even if they make it out of the hospital, they’re still surrounded. So despite the group’s protests, Morgan insists that he has to do something to draw the walkers away from the front of the building. The group leaves him there and he goes back up to the roof with a walker, telling Jim, “we have work to do.”

John radios Morgan to tell him Martha’s out of commission, but June picks up instead. They have a happy reunion, during which she tells him where they are and he says they’re coming to help. Help, as it turns out, is needed. There are dozens of dead on the ground level. Morgan springs into action.

Martha wakes up and is crazy as ever. Alicia tells her she wanted to leave Martha on the side of the road. Martha tells her she should have, and that when she sees Morgan again, he’ll be thanking her. On the roof, Morgan drags the walker around while Jim watches, still refusing to help. Morgan throws the walker off the side, directly onto a car, which sets off the alarm and draws the walkers away. Really? Is Morgan’s aim that good? Would the car alarm still work? I’m surprised Morgan didn’t take more walkers, in case he missed the first time. Unless he was planning on throwing Jim over the side, which…I hate to say it, but I would’ve been okay with.

Team Morgan heads for an ambulance parked outside the hospital, but June stops and radios her friend. Morgan tells her to leave and says he has “things to make up for.” As the walkers get closer, June is forced to go. Jim, unimpressed by his companion’s heroics, continues guilt-tripping Morgan on the roof.

June radios Morgan and tells him they’re going save him — Morgan says he can find his own way, but John interjects. The group tells him no matter what he thinks, they need him. They found a (working) construction crane on their way out and bring it back to the hospital.

The dialogue in this scene has me wondering…whose decision was it to keep Martha alive? Alicia says she wanted to leave her by the side of the road, John seems bewildered that they chose to save her. You’re not telling me Strand opted to save her. And would they really make a choice based on what Charlie wants? The decision they made isn’t matching what they’re saying about it. A tied-up Martha warns Luciana that their attempt to save Morgan isn’t going to end well. Luciana ignores her, and the team raises the crane to the highest it will go….which isn’t high enough. Morgan finds some rope on the roof and ties it so he can lower himself down to its level. Jim refuses to make the trip, so Morgan goes on his own.

Everything’s just fine until he makes it down, and a walker crashes through the window. He can’t fight it off without his stick, but thankfully, John’s on hand: he takes the walker down with a single gunshot from stories below.

Morgan jumps to the crane and the team lowers him down. They can’t drive through the horde that has surrounded them, so Morgan offers to jump down and lead them away — until Jim has a last-minute change of heart. He gives Sarah his beer recipe and throws himself off the roof, setting off another car alarm. The group makes it back to Al’s tank and finds Martha gone; that’s okay, they reason, because she didn’t want their help anyway. They drive away from the hospital, discussing Jim’s beer and offering suggestions for what they’ll call the brew once they make it. They also discuss where they’ll go now, since almost everything has been decimated by the hurricane. Of course, Morgan brings up Alexandria. He says they’ll find Al and go to Virginia.

Back in the city, Martha has found Jim. She’s written his last words on his face — the recipe for his brew — and tells him they’re going to go make Morgan “strong.”

See you next week for “…And Then I Lose Myself,” the Season 4 finale!